Yesterday was a special occasion for me – no, not so much the Rapture but a relationship anniversary – though I will admit that in a bizarre way all that ruckus had made me feel like flying up to my old and still occasional New York City stomping grounds to camp it up with Harold Camping's kooky kultists in Times Square. But I'd recently had surgery and am grounded in my current home base of Miami for the moment. So here we were at the appointed time at a fancyish downtown fish joint called The Oceanaire Seafood Room, and I discreetly glanced around to see if any forks or service trays in the large room had dramatically crashed to the ground. But no clothes on the floor and nary a sway of an onyx chandelier. The ship models stayed upright and the swordfish and tarpons nailed to the walls above. Not a tingle of a tremor or sign of a tsunami. Oh, goody – especially since I was finally getting to tuck into a long-awaited baked Alaska. 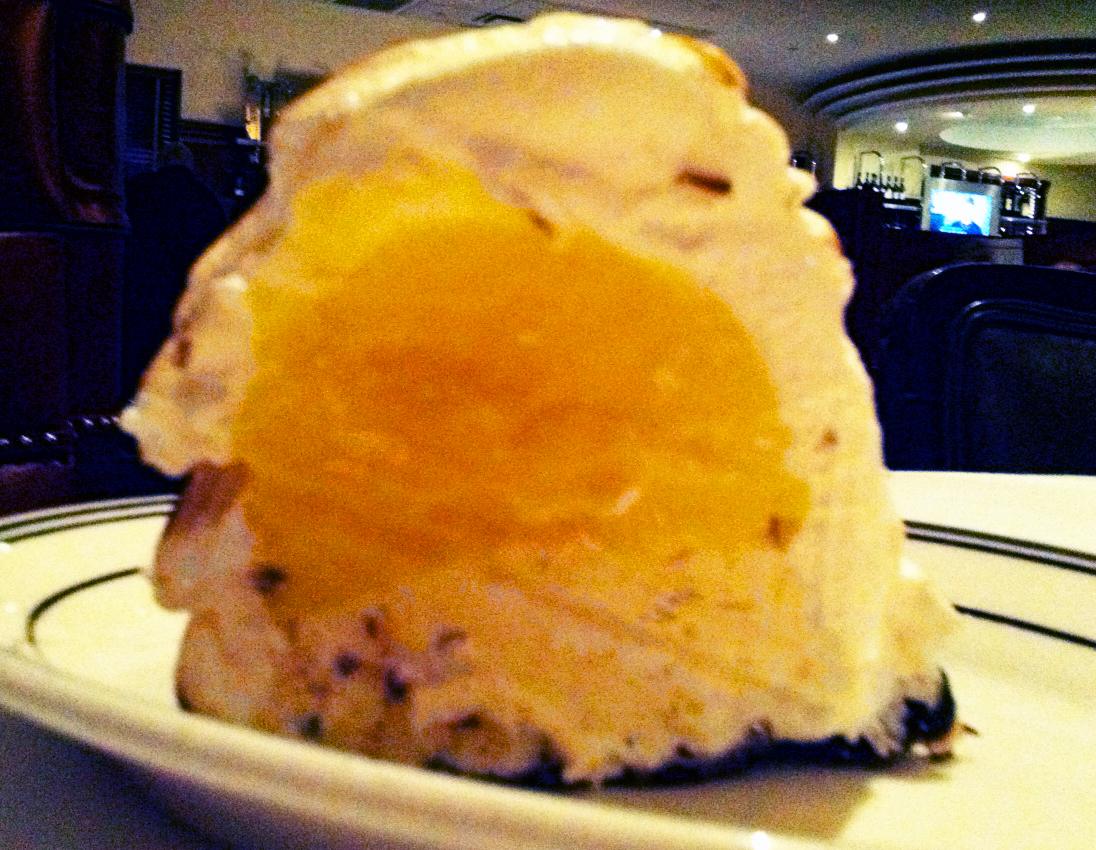 Best Dessert Ever, Or Elaborate But Passé?

If you're of a certain age, maybe you remember back to the era when ice cream plunked on a cakey bed and slathered with singed meringue was the epitome of the classy dessert. If on the other hand you're wondering WTF I'm yammering on about, baked Alaska (aka "Alaska, Florida" and omelette norvégienne – Norwegian omelet) is a venerable postprandial that dates back at least a century and a half, with key antecedents including New York City's Delmonico restaurant, Paris' Grand Hotel, and Thomas Jefferson's White House; it was Delmonico's that bestowed the name in honor of the U.S. acquisition of "Seward's folly" and eventual 49th state, back in 1867. When I was a kid in the 1970s, 'twas still before the full blossoming of the "foodie" movement and upscale dining much beyond steakhouses or classic French. Since then, it's been overshadowed by other treats both baroquely overdone (choco-peanut-butter cheesecake, death-by-chocolate) and somewhat simpler (apple pie à la mode, crème brûlée). I mean, really: When was the last time you spotted baked Alaska on any menu? Probably about as often as, say, peach melba. Miami's a respectable foodie town by now, and I've only been able to smoke out BA on four out of thousands of local menus (one of those, by the way, I hear dubs its version "the Sarah Palin dessert," though I'd've thought that would be closer to "half-baked Alaska"). So I've long had a bit of an inside joke with my local friends and family when discussing where and what to eat out, along the lines of "actually, I really have a craving for baked Alaska." Hell if I fully know why I glommed onto that one in particular. A mix of nostalgia and oddity, maybe – let's face it, this puppy's practically Ferrán Adriá-league weird, yet simultaneously more vintage than Escoffier. But for all the tired joking, it's been possibly decades since I've actually had one. So after spending a decent chunk of Saturday witnessing folks on TV and Twitter and Facebook take their cracks at the burning question "what would I do if the world were ending?" I thought that if there was a distant chance the Rapturistas truly knew something I didn't, I'd take what might be my last chance to actually wrap my tongue around one for the first time in who-knows-when. Thus it was that yesterday evening, after I'd gone through a nice crab cake and tropical-style red snapper, and around the time the End Times were due to start rockin' and rollin', our waiter arrived at the table bearing a plate piled with a good half-foot pile of foam. He deftly drizzled rum-based fluid over this jiggly little tower, ignited a blue flame for the requisite singeing (finally, a hint of the flames of hell – though I dunno, somehow I figured they'd be orangier), then cut it in half and served it to us. This one sat atop a brownie and sported, in addition to vanilla ice cream, a dollop of mango sorbet in a tip of the hat to Miami's tropical/Cuban vibe (I've heard of other variations elsewhere including bananas, different flavors of ice cream, and so forth).

What did I actually think, after this long wait? Not bad at all, even though I couldn't even finish my half. "Yeah, a lot of people have had enough before they reach the end," the waiter agreed. "Actually, it's not one of our most interesting desserts."

Whatever. I'd just enjoyed a pretty tasty if pricey meal, capped off by satisfying my simmering curiosity to reacquaint myself with baked Alaska, and we were still gazing at fishes on the walls instead of swimming with the fishes out in the nearby Atlantic – indeed, we were looking forward to another 19 months to live before the next scheduled apocalypse. For that one, if I can't make it down to Chichicastenango or Tikal in Guatemala, or Chichén Itzá in the Yucatan, and am still in Miami on December 21, 2012, what the heck – I'll head over to Cheén Huaye for Mayan.