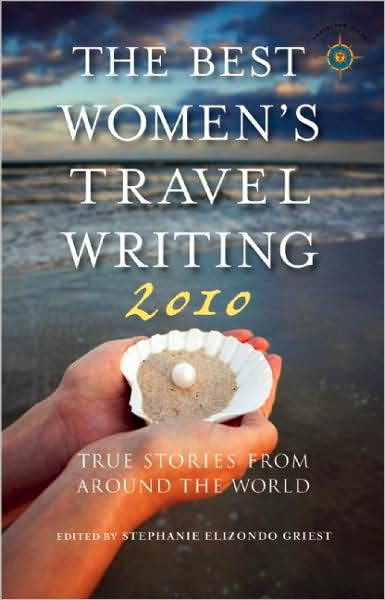 Get ready. Pack your bags. You are about to embark on 27 adventures that will take you all over the world, inspire your wanderlust, and journey into your own heart in the Best Women's Travel Writing, edited by award-winning writer Stephanie Elizondo Griest.

Succulent and rich, Elizondo Griest brought together an eclectic group of women in the sixth volume of the Best Women's Travel Writing, which Travelers' Tales has published since 1995, along with other women's gallivanting tales. The book opens with a quote from diarist Anaïs Nin, "We travel, some of us forever; to seek other states, other lives, other souls," which hints to the events that are about to unfold with each turn of the page.

Lusting to fulfill a dream and to journey the globe is something that can't be contained, as Elisabeth Eaves points out in "Wanderlust". Eaves described her own nomadic existence, "Wanderlust is not a passion for travel exactly, it's something more animal and more fickle-more like lust. … The essayist Anatole Broyard put it perfectly: 'Travel is like adultery: one is always tempted to be unfaithful to one's own country. To have imagination is inevitably to be dissatisfied with where you live … in our wanderlust, we are lovers looking for consummation.'"

Nearly every story in this collection sucks the marrow out of the bone of life. These women pushed and tested multi-societal and their own boundaries as they traversed through fretted affairs, memories and pleasures of food, and civil disobedience all returning home to their loved ones and within themselves.

Love is a common theme throughout the stories, but not the heart-fluttering, swoon-inducing kind of love found in romantic comedies. Colette O'Connor ("Not-Surfing New Zealand"), Diane Caldwell ("Desert Queen"), Heather Poole ("An Ode to B-Cups"), and Landon Spencer's ("Bosnian Blues") romantic tales are more theatrical and tactile lessons on the travelers' desires as they search for the ultimate love: true and most of all of themselves.

Then there were women like Alison Stein Wellner, who was simply out to chase the spice of life. A quest launched at a New York City Chinese restaurant during her girlhood when her grandfather's head exploded from a little extra-hot mustard. Traveling through several countries, including: Germany, India, and Central America, Stein Wellner searched to experience the same head-launching ear-blowing experience that would flush her face "purpleish red" with steaming ears the same as her grandfather's did in "The Heat Seeker". Saffron took Beebe Bahrami back to the Iranian kitchen surrounded by the women of her family in Iran before the revolution and their Diaspora to the United States. Profiling each of the women, she searches for and finds the kind of woman that she became in "Grinding Saffron".

Becoming the women that these women wanted to be took risk, stepping out of their comfort zones and social mores into civil disobedience with no map and few role models to refer to. They took the plunge anyway, from donating a vagina to research as Johanna Gohmann did in "Design a Vagina"; to helping impoverished women give birth in Bali as Liz Sinclair did in "Bali Birth"; to meeting revolutionaries as Shauna Sweeney did in "The Moustache Brothers of Mandalay"; or walking on the late Osama bin Laden's week-old footprints as Diane LeBow did in "Tea in Kabul".

These women's journeys opened their eyes to a broader understanding of themselves and humanity through all of the manufactured divides: boarders, oceans, languages, race, politics, and gender. While these women simmered and settled into the flavor of their own lives, they willing entertained and shared the lessons they learned -- from understanding their limitations and weaknesses to finding their strengths -- in this divine volume of travel tales that we can all benefit and take inspiration.

Link to Girls That Roam: www.girlsthatroam.com/GRead/Lustrous_adventure.htm