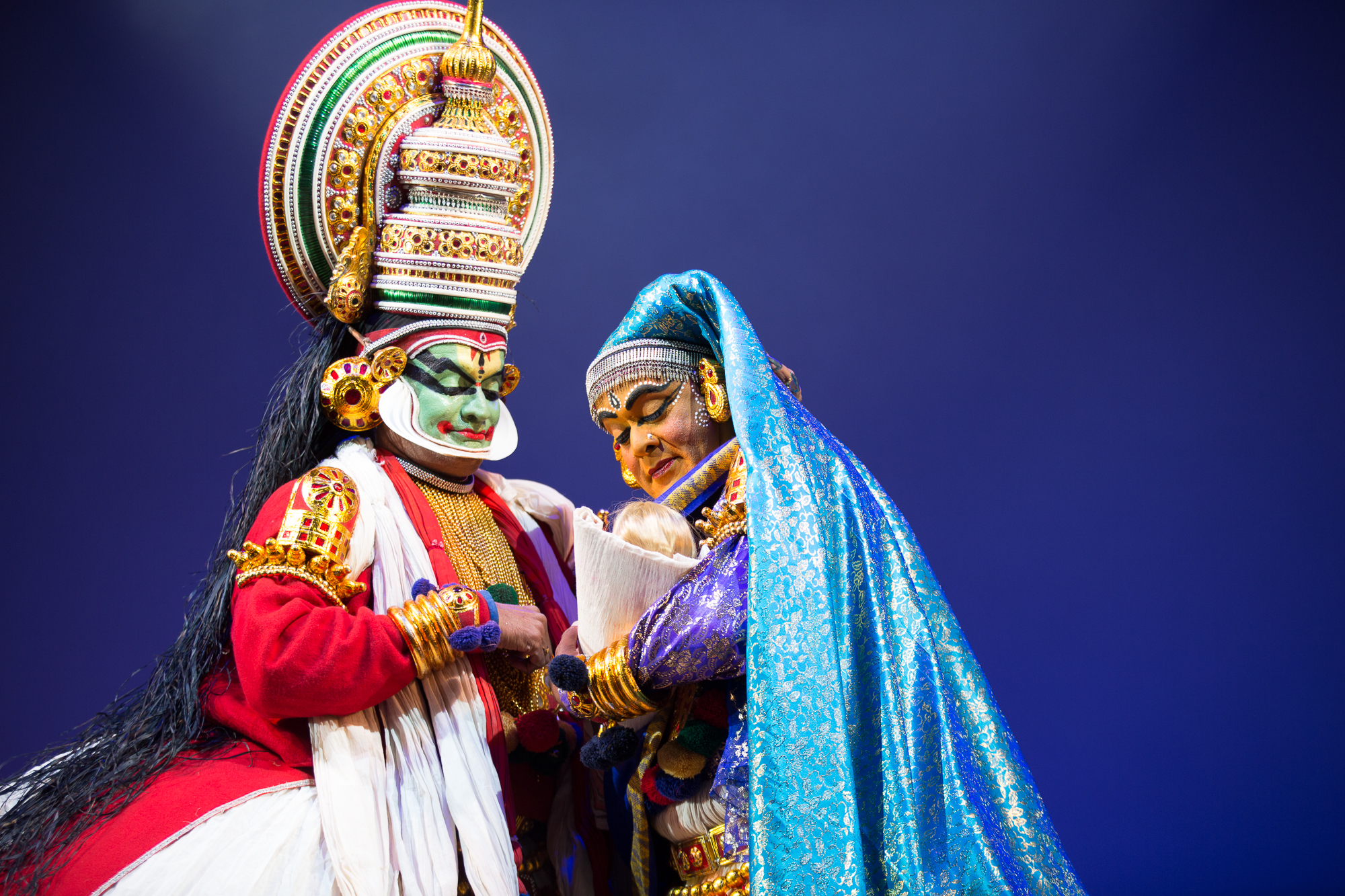 Reknowned for its scenic beauty, with highlights including gorgeous beaches; verdant hills and forests; and a network of inland waterways plied by traditional houseboats, Kerala state - which Indians like to dub "God's own country" - is also highly literate, cultured and a trove of traditional arts. Here are some of the highlights which can enrich your visit - which you can experience on your own or through reputable tour operators such as IPR Holidays.

Dating back more than more than 400 years, this form of classical Keralan performance (top) is a complex mix of dance, music, and vocals, with exaggerated hand and facial expressions (many derived from ancient Sanskrit texts such as the Natya Shastra), as well as vivid and elaborate costumes, accessories, and makeup (bearing some similarities to Japanese kabuki). Traditionally performed by men (but now also by some women), Kathakali performaces act out a repertoire of hundreds of plays based on regional folklore and Hindu mythology - and can last four hours or even all night. 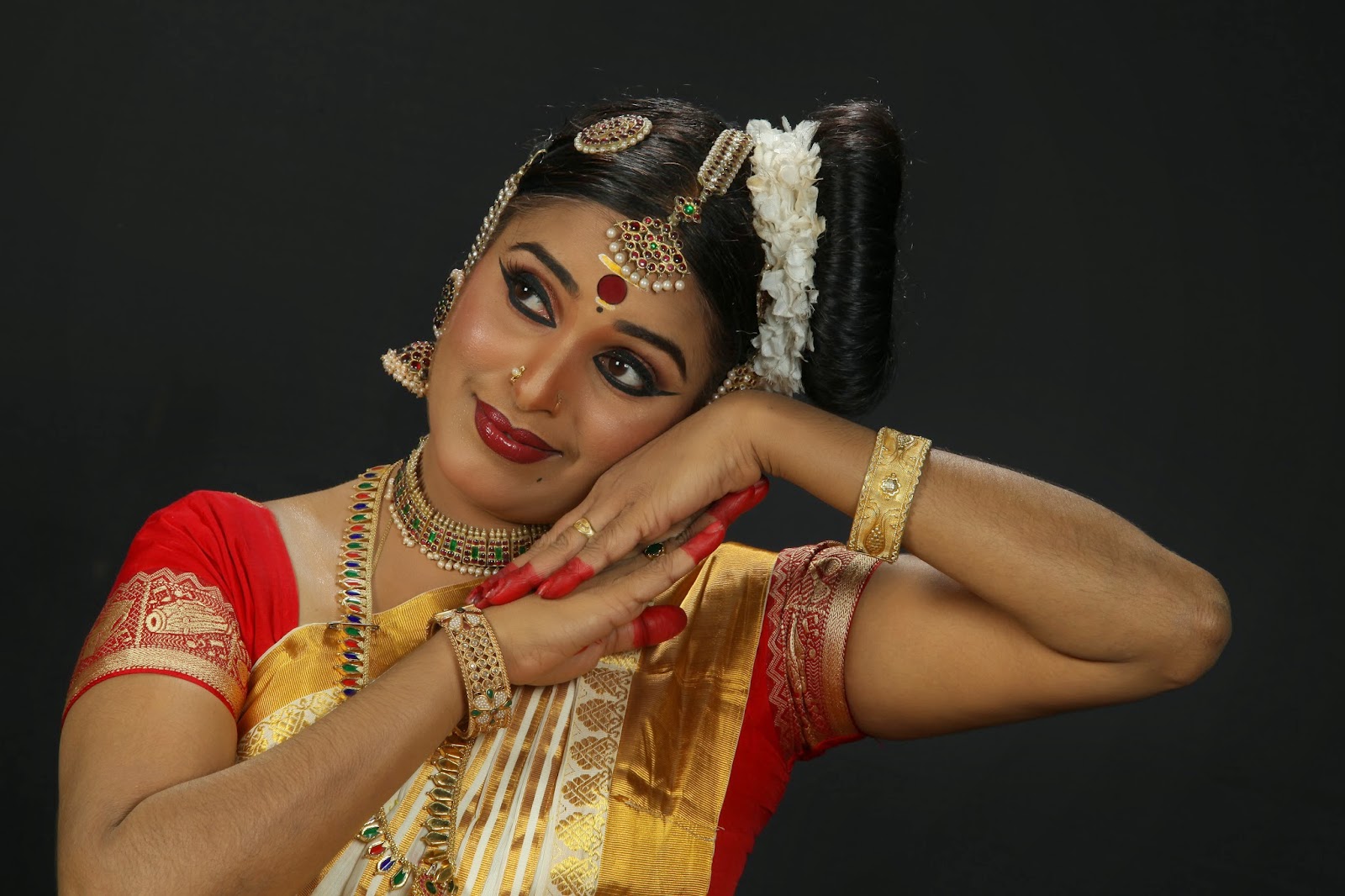 One of India's main classical dance forms, Mohiniyattam got its name from Mohini, the female avatar of the Hindu god Vishnu - using the power of the feminine to defeat evil. Also rooted in the Natya Shastra, this is largely performed by a single dancer who conveys emotion and storytelling with her highly stylized and unique body movements as well as eye and hand gestures, paired with gorgeous costumes and accessories. She is accompanied by drums, flute, cymbals, a stringed instrument called a veena, and sometimes a singer, performing slow, melodic music with lyrics in Manipravalam, a language hybrid of Sanskrit and local Dravidian tongues Tamil and Malayalam. 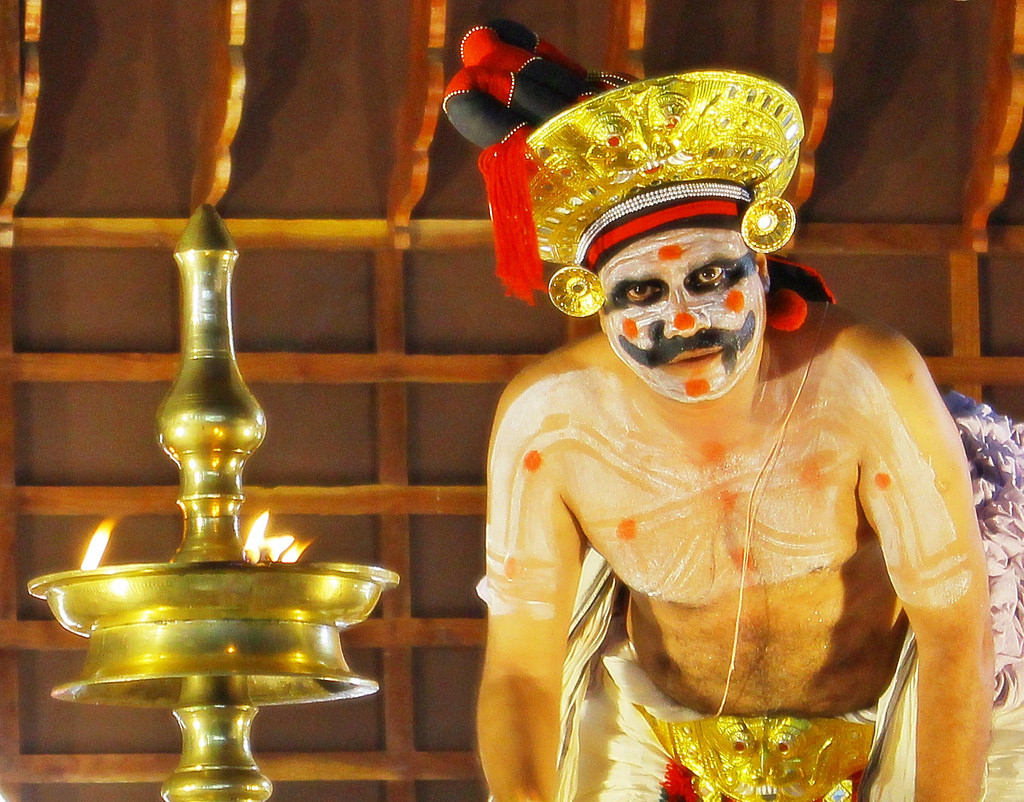 
Another form focused primarily on a solo performer, Chakyar Koothu consists of a prose/poetry monologue relating tales from Hindu classics such as the Ramayana and Mahabharata epics, and takes place in the Koothambalam, an an area of Kerala's Hindu temples designed for this purpose. Accompanied by traditional cymbals and a copper drum, it can also go off script to include sometimes witty and humorous commentary on current events and even comments directed toward members of the audience. 
Oppana (above) is a form of singing and dancing originally performed by females accompanied by percussion and organ during the preparation of Muslim brides (there's also a male version for the bridegroom), and now sometimes presented at festivals and other venues.

Kolkali is a circular dance performed by men with sticks, mostly in Kerala's North Malabar region. Another Malabar male Muslim tradition, Duffmuttu involves a half dozen men dancing and singing to the rhythmic beat of a traditional percussion instrument called the duff. Yet a third is the Arabana Muttu, named after a drumlike tambourine played by men sitting in a semicircle as they simultaneously sing - traditionally to welcome dignitaries.

Also in the North Malabar region, Theyyam is a form of dance-centered ritual worship, mostly performed in front of village shrines by Hindu men, though there is one ritual for women, as well. Performances are a mix of dance, folk instruments, vocal recitations, and elaborate costumes and makeup (-usually orange).

There are also a good number of Christians in Kerala, and Margam Kali is one of their classic dances, performed both slow and fast in a circle to an a capella singer relating the story of St. Thomas the Apostle, who it's said proselytized in Kerala in the 1st century. Also Christian, Chavittu Nadakam is a colorful classical theatrical form incorporating dance, drama, and music, originating in Cochin and thought to originate from the influence of the Portuguese missionaries who colonized the area in the 16th century; featuring medieval-European-style costumes and commonly related Bible stories.

There are various others with colorful costumes and dramatic action, as well, especially those relating to Hindu temple festivals, such as Thirayattam, Padayani, Koodiyattam, Poorakkaly, Mudiyett, Sarpam Thullal, and Krishnanattam. Most Kerala tour packages include performances of these various marvelous examples of Keralan musical heritage.

Kerala is also famous for its vibrantly, richly hued mural paintings, mostly on the walls of temples, churches, and palaces. Generally dating between the 9th and 16th centuries, they deal with the themes, gods, and stories of Hinduism. Some of the best known include those in Kochi's Mattancherry Palace (above); Pundarikapuram Temple in the city of Kottayam; Mahadeva Temple in the town of Ettumanur south of Cochin; Panayannarkavu Temple in south Kerala's Pathanamthitta district; and Padmanabhapuram Palace in Thuckalay, also in the south 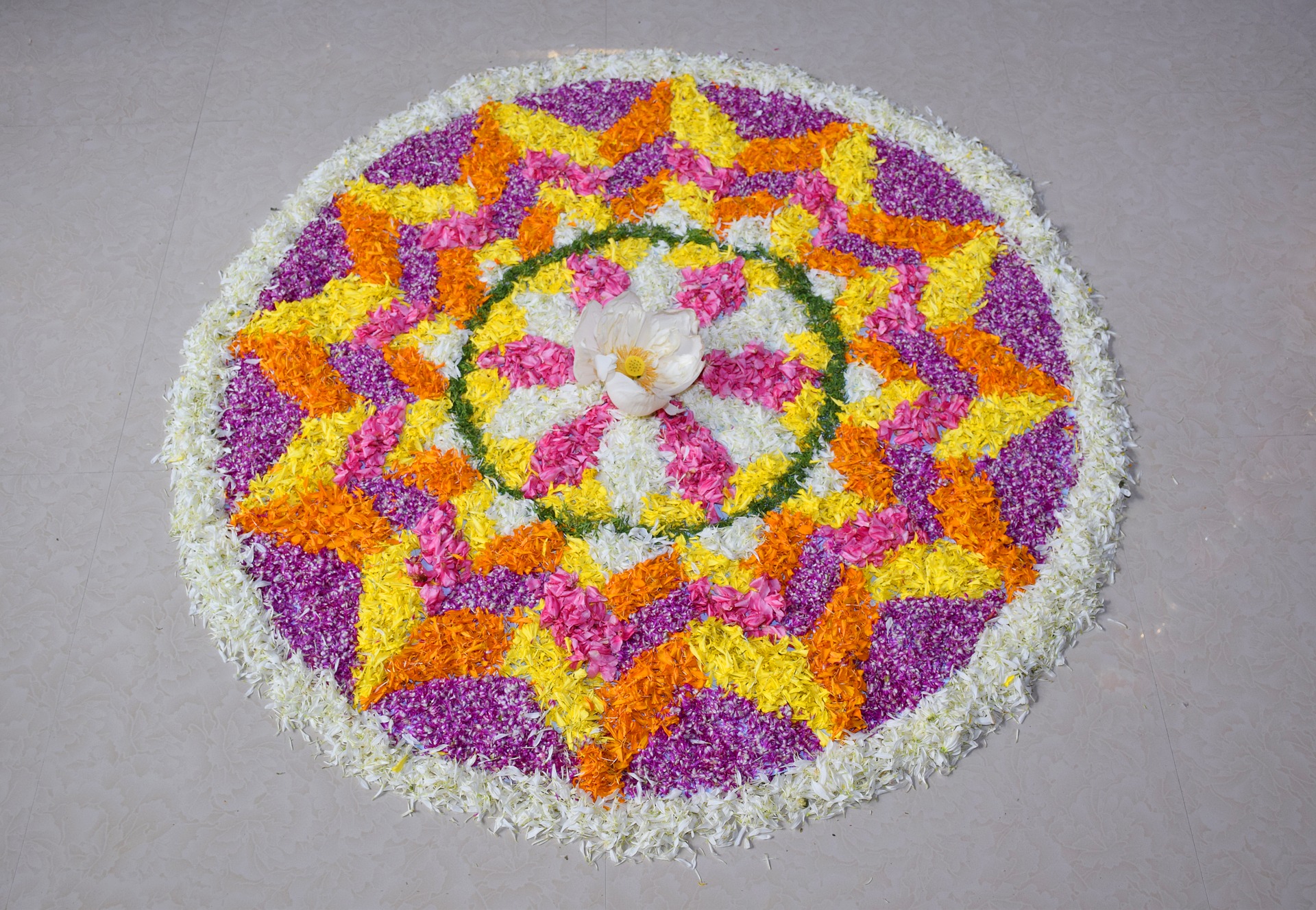 Onam is the state festival of Kerala and its largest, a four-day event in Kerala's capital Thiruvananthapuram that celebrated during the local Malayala Hindu calendar's month of Chingam, which overlaps August and September (this year it's August 22 to September 2). Observed by Keralans of all faiths, it's both a harvest festival and commemorates the legend of the mythical King Mahabali, a devotee of the Hindu god Vishnu, with the belief that Mahabali comes back to visit his subjects once each year. The first day, uthradam, is a day of shopping for foood for the festival feasts, as well as new clothes and other items, while the second day, thiruvonam, is when most of the celebrations, feasting, and cultural activities take place, such as the vegetarian sadya banquet and pookalam (above), intricate flower arrangements laid out on the ground.

Another Hindu festival, Vishu, is observed by Mayalis throughout the state to mark the beginning of the Malayalam calendar year (usually April 14 or 15), is dedicated to Lord Krishna, lasts 24 hours, and is more solemn and low-key, characterized by time with family, including the sadya meal, visiting temples, buying new clothes, almsgiving and elders giving money to children, and kids setting off firecrackers.

A third, Thiruvathira, falls in December or January (in 2021, December 20), is mostly celebrated by women in honor of Shiva, and involves fasting as well as a special, sinsuous circular dance called Thiruvathirakali. Including singing and clapping, these days it's also performed at other times of year. Beyond those more local celebrations, a pair of pan-Indian festivals are also big in Kerala. Diwali, the five-day Hindu festival of lights celebrated between mid-October and mid-November (this year, November 12-16). Symbolizing spiritual victory of light over darkness, good over evil, and knowledge over ignorance, it like Vishu is also fairly home- and family-centered, with Keralans adorning their dwellings inside and out with oil lamps and/or candles, having family feasts, lighting fireworks, and exchanging gifts. Also held in the fall (this year October 17-25), Sharad Navratri, in honor of the Hindu goddess Devi, involves staging of folk dances and the immersion or burning of statues representing evil. Finally, given its historically significant Christian population, dating back more than 1,500 years, Christmas is celebrated enthusiastically all over Kerala in December, and in many of the larger towns and cities especially, holiday lights adorn homes and streets, and in recent years Christmas trees becoming increasingly popular. With the dry season beginning, the weather is warm but not hot, and it's a popular time for visiting cool hill stations such as Munnar, Thekkady, and Vagamon - especially for honeymooners, and various of these hill stations offer great honeymoon packages.


Various Kerala tour packages during these times include participating in various of these celebrations, depending on the time of year.