Most people when laid off from their job, especially a high-powered dot-com career, don’t do what Tierza Eichner did. Instead of polishing her resume and job hunting, Eichner took off on an eight-month surfing vacation to Central America, Hawaii and Mexico.

At the time, in 2001, the northern California native had only been surfing about a year. She had tried surfing in her early 20s. It didn’t go well – pummeled by waves, bashed by the board, and leg muscles ripped. Then, in her early 30s, Eichner received surf lessons in Santa Cruz, California as a gift, and her passion exploded … in tsunami proportions. Eichner’s surf adventure – intended to be a hiatus while waiting for the economy to improve – turned into a radical life change creating the successful “endless summer” business of Pura Vida Adventures women’s surf and yoga retreats in Costa Rica.

“Starting Pura Vida Adventures … changed my life, and many other people’s lives, for the best. Having a career that is healthy for you and your community is the most fulfilling work you can have. I feel fortunate to have found my passion and my purpose,” said Eichner in a 2015 interview with the Wall Street Journal. Now 15 years later, Eichner, 46, married and a mother of 2-year-old twins, shares living between Oregon and her second home of Santa Teresa, Costa Rica. This was the area she loved most during her 2001 trip, and where she has led every surf camp since her first in 2004. Santa Teresa Beach is a hot surf spot in Costa Rica and is called one of the most beautiful beaches in the world for its warm Pacific Ocean, great waves, sparkling white sand beach, tropical jungle and low development. Perhaps the fact that Eichner wasn’t always a surfer girl, along with her deep commitment to personalized service and life-transforming experiences, is what prompts women from ages 20 to 60, from all walks of life in the U.S. and Canada to attend her Costa Rica surf camps.

Named after the Costa Rican phrase “pura vida,” which, loosely translated means “enjoy life”, Eichner says Pura Vida Adventures is about giving retreat-goers a new outlook on life. Retreat groups are small and intimate. An average of 10 to 12 women attends each retreat, which allows for a three-to-one ratio with surf instructors who are also mostly all women. Eichner said the majority of attendees have never surfed before. “Surfing is a sexy sport that everyone wants to try. It’s on the bucket list for a lot of people. For a lot of women, surfing is something they have always wanted to do. And who wouldn’t want to come to a Costa Rican beach and surf?” touted Eichner. “A lot of women are looking for a life change – they want out of their job, they just got divorced, or had someone close to them die. Or, they need a stress relief from their high-powered jobs and lives.”

Attending a women-only retreat lets participants be free to really “let their hair down and be themselves”, said Eichner. Not only do they learn how to surf and enjoy yoga, they develop friendships that last.

This explains Pura Vida Adventures’ high percentage of repeat guests. Some women come back every year. Another reason for their repeat business, said Eichner, is the location. For the past nine years, Pura Vida Adventures has based their average 20 camps a year at the Santa Teresa beachfront hotel Tropico Latino. A relaxed, warm, friendly atmosphere and excellent service enrich the hotel’s offering of stylish and comfortable accommodations, a beachfront spa and yoga deck, and notable restaurant.

“People love the location. You can walk out your front door and surf. We have great food at the hotel, and things to do within walking distance. You feel like you’re at home, and the community we’ve built is like a family,” explained Eichner. 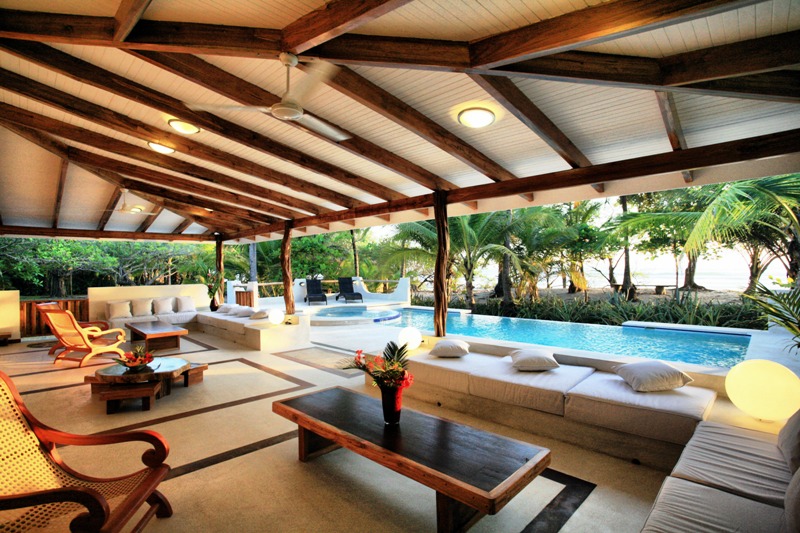 What’s it like on a Costa Rica surf and yoga vacation with Pura Vida Adventures?

Pura Vida Adventures weeklong retreats last seven days and six nights. Participants fly into San Jose, Costa Rica (SJO) and then take a local flight to the beach town of Tambor on the southern Nicoya Peninsula. From there, it is a short taxi ride to Hotel Tropico Latino in Santa Teresa. Accommodations are shared or private.

Your days will be spent with yoga in the morning before breakfast, followed by a surf session and instruction. After lunch, afternoons are enjoyed doing more surfing, or going zip lining, stand-up paddling or horseback riding, getting a massage, or with down-time relaxing in a hammock. You will enjoy three healthy, gourmet meals per day, and there are excursions into town. Surf and yoga vacations in Costa Rica are available all year long. Prices start at $2,395. Co-ed retreats also are offered. It is recommended to make reservations at least a few months in advance.