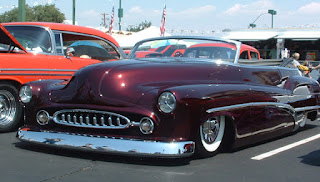 Pull on your bobby sox, step into your saddle shoes, roll up those jeans and dig out those poodle skirts! It's time for Hot August Nights in Reno, Nevada.

Every year, Reno hosts one of the biggest and best car shows in the country. A 10 day extravaganza of cars, cruising and rock and roll!  Stand on any street corner in Reno or Sparks during those 10 days in August and it seems that just about every third car on the road is a classic, as participants and car enthusiasts roll through town from all over the country. You might call it the Mardi Gras of wheels.

The original event in 1986 drew some 10,000 people for a concert at the Events Center which featured the Righteous Brothers, Wolfman Jack, and Jan and Dean. That first Friday night 'car parade' was lined up 6 across with participants eager to cruise the main drag  - Virginia Street. There was nothing else like it and people were crazy for the sights, sounds and good vibes of the '50's and 60's - as they have been ever since.

The magic and excitement of that era is all there, with nightly 'cruises' down the main drag where more people line the streets than I've seen for many a parade. Numerous venues sponsor controlled cruises, notably the city of Sparks, where Victorian Avenue is a constant - and I do mean constant - parade of vehicles that make my heart beat a little quicker as the nostalgia grabs hold. 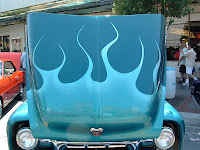 "Yeah man, that's my favorite" "I used to have one of those" and "Oh man! We used to cruise in Dale's '59 every weekend!" are the type of comments heard all around me by friendly people more than happy to share their muscle car memories.
Show 'n Shines abound with prizes and trophies for many a proud owner. Downtown streets and casino parking lots are full of exhibitors and onlookers can wander at will - drooling over paint jobs, High Performance engines, wide whitewalls and all that shiny, spotless chrome under the hood. Not only are the cars exciting to look at, but the license plates are fun to read. One of my favorites was Huds Hud - A Hudson owned by a guy named - Hudson!

The entertainment that abounds in Reno during Hot August Nightsis right out of that same era with DJ's playing all the oldies and groups like Herman's Hermits, Paul Revere and the Raiders, Gerry and the Pacemakers, B J Thomas, Elvis impersonators, and many, many more making live appearances. A good deal of the entertainment is free on outdoor stages. One of my positively fave HAN memories is standing on the pavement craning for a view of the stage and singing along with everybody else in the crowd ("Baby baby, can't you hear my heartbeat...") as a constant parade of Fords, Chevies, Vettes, and who knows what else rumbled down the street behind me. I risked getting a good smack as I sang "I'm 'Enery the Eighth I am, 'Enery the Eighth I am I am..." all the way home. 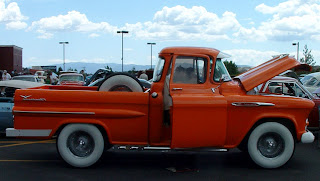 Although the majority of the cars are from the 50's and 60's, classic vehicles from the 1930's and '40's are also in attendance and there are always several Model-A's or T's to be found.
And when you get hungry, nothing hits the spot like a juicy burger and fries. There are a couple of diners in town - Joe's Diner on S. Virginia St, which hosts it's own cruise nights - and Mel's Diner, located in the Sands, which has just about the best, (and most filling) chocolate shakes I've ever had the pleasure to slurp down.

During HAN  (as the locals call it) you can attend a sock hop  and even a prom. You can register to win a classic car of your own - there is always at least one being given away by the casinos - or go to the Silver Auction and bid on one of the many fine vehicles (over 1000) offered on the block.  You can browse through a Swap Meet and maybe find those perfect hubcaps you've been searching for and pick up a pair of fuzzy dice to hang from the rear view mirror while you're at it.
Although Hot August Nights is one of the biggest and the best, summer is the time for cruising no matter where you are and if you can't make it out to Reno, chances are you can find a car show or two near you! You might even be lucky enough to have your own classic ride! Which would make you the envy of a lot of people. Positively. Myself included! 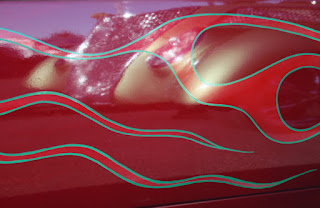 As always, words and photos are my own, and require permission to reprint. However, feel free to share the blog in it's entirety. In fact, I encourage it!  http://mauverneen.com