Back in April while my two teen kids were enjoying their spring break from school, my wife Sue and I researched destinations for an August family vacation.

The four benchmarks that we used in the vetting process were:

Searching locales in the mid-Atlantic region, we discovered Chincoteague Island, Virginia.  Travelers who are in the know about Chincoteague are fans of its rich and interesting history (including the story of its famous ponies), lush natural location and recreation options, and friendly, laid back pace - all of which sounded right up our alley. As we reviewed the accommodations in Chincoteague, we were on the lookout for a hotel that offered suites, which have larger rooms than conventional hotels/inns/B&B’s (with two teen offspring, we definitely need that extra real estate).  Our three choices (all located on Main Street, which runs the entire seven-mile length of the island) were the Hampton Inn & Suites, The Comfort Suites, and the Fairfield Inn & Suites, by Marriott, Chincoteague Island.

Scrolling through the photos on its site, the Hampton Inn & Suites Chincoteague-Waterfront seemed very nice.  The rooms were fine and the interiors were OK, but there was an overall nondescript vibe to the hotel:  it could have been located anywhere, and there didn’t seem to be anything “Chincoteague” or “beach” about it.

The images on Chincoteague Island Comfort Suites Hotel’s site were also pleasant, but the property’s design was somewhat bland and not really stylish or contemporary.  Plus, as with the Hampton Inn, the anonymity and non-Chincoteagueness (or would it be Chincotude?) of its atmosphere was kinda meh.

The pics of The Fairfield Inn & Suites by Marriott, on the other hand, truly popped:  they evoked a lively energy and beachy appeal that the other suite hotels were missing.  But the Fairfield Inn didn’t just photograph well, it has also generated scads of wowed reviews:

Impressed by its vivid beauty shots and overwhelmingly positive guest ratings, we set out to set up a stay at Fairfield Inn & Suites, by Marriott, Chincoteague Island during the first week of August.

The journey to Chincoteague from New Jersey was only 4½ hours, and the route was simple and direct, so we weren’t exhausted when we arrived.  Location-wise, it’s only 16 minutes from Wallops Island, and 9 minutes to the NASA Flight Facility Visitors Center. 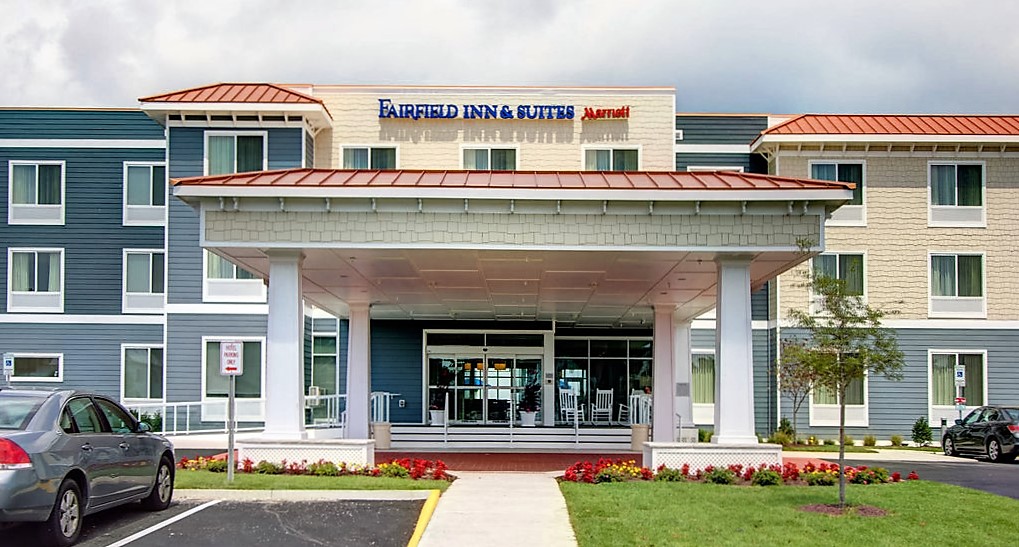 The Fairfield Inn & Suites by Marriott, Chincoteague Island opened in July 2013 and is the newest hotel on the island.  Located on the gorgeous Chincoteague Bay, it has 92 guest rooms, including standard king and double queen bedded rooms as well as king and queen suites.  The hotel offers a number of free perks to its guests, such as...

The lobby’s large and colorful breakfast area looks out on Chincoteague Bay, and was a great spot to begin the day.  The morning buffet included eggs (scrambled and hard boiled), breakfast meats, biscuits with sausage gravy, fresh fruits, a selection of yogurts, waffles, oatmeal with a choice of toppings (walnuts, brown sugar, raisins), bagels/breads/muffins, and juices.

Also available in the lobby were two beverage stations, which along with caf and decaf coffee, offered hot water, a variety of teas, and a dispenser of cold water.

While excited at first about having access to free coffee throughout the day, Sue was also wary:  she had experienced free servings of weak, old, or just plain nasty hotel coffee in the past, and - because she needs a potent java fix to get her rolling in the morning and mid-afternoon - was forced to leave the premises in search of an acceptable infusion.

Such excursions weren’t necessary at the Fairfield Inn & Suites thanks to the fact that the hotel served a proprietary blend called Bold Beginnings.  Sue found Bold Beginnings to be fresh and tasty.  This made her quite pleased during our entire stay - and apparently, she wasn’t the only guest at Fairfield Inn to enjoy the coffee.

In the late afternoon, the lobby was superb for claiming some private time.  Its comfortable seating areas and soft lighting made reading, chilling, or smart phone tapping a delight.

Immaculate, airy, and bright, our rooms were ideal for unwinding and achieving quiet, indulgent sleeps.

Unexpected surprises that the rooms delivered:

The Pool Deck and Patio

This special place, which spotlights a long, panoramic view of Chincoteague Bay, gave us a lovely way to greet the A.M. sun and cool out in the evenings.

Refreshing ocean breezes; the sounds of seagulls, passing fishing boats, and laid back tropical music (more on that here); and blankets of warm sunshine were unexpected bonuses that made our stay at the Fairfield Inn & Suites even more memorable and relaxing.

What Sets The Hotel Apart

Fairfield Inn & Suites by Marriott, Chincoteague Island has a number of attributes that distinguish it from the competition:

Once you’ve unpacked and settled in, it’s impossible to not embrace the relaxed pace, natural beauty, and historic charm of Chincoteague Island.  The award-winning customer service, superbly executed features, and impeccable accommodations of Fairfield Inn & Suites are guaranteed to enhance your getaway - and we’ll absolutely, positively be returning to enjoy them again.