"The world has few secrets, but Bhutan is one of them."
-Kartie Hickman, English novelist and travel writer


The "Kingdom of the Thunder Lizard" is known to avid trekkers around the world as one of the last great frontiers for hiking and exploration. Nestled in the Himalayas south of Tibet and north of India, this is a predominantly Buddhist nation with deeply held customs and beliefs. With a population of just under 750,000, Bhutan prides itself on having limited outside influences in favor of protecting the unique culture that it's known and cherished for centuries. This tight regulation on outside influence has made it one of the  world's most secluded societies; for example, the television wasn't introduced here until 1999 and the cellphone didn't arrive until 2008. Both of these technologies, as well as dozens of others, are still very uncommon even today - which makes traveling in Bhutan almost like taking a step back in time. The national territory encompasses only about 38,400 square kilometers (just under 15,000 sq. miles); a bit more than the U.S. state of Maryland and roughly half the size of Scotland. The southern half of the country generally remains below 3,000 meters (9,843 feet) in altitude and has a number of valleys that are home to a majority of the country's population of around 727,000. More than 72 percent of Bhutan is covered in pine forests and it's been decreed by the government that at no point in the future is the country to harvest lumber below the point of 60 percent coverage. The northern half of Bhutan sees a dramatic increase in altitude as some of the highest peaks in the world are found in the Bhutanese Himalayas. Containing thousands of lakes, hundreds of glaciers, and endless trekking paths, Northern Bhutan is one of the most amazing trekking destinations left in the world.

Being a predominantly agriculture-based economy with plenty of cultivable lands; Bhutan is an exporter of many crops to India and China, especially potatoes, apples, oranges, and chilies. With a small population relative to farmland, farmers have been able to completely avoid using any hormones or pesticides, thus making this the only still fully organic country in the world. However, as is the case with most agriculture-based economies, the average income in Bhutan is quite low. But despite the poverty, there is no noticeable homelessness as it is core to Bhuatenese culture to care of one's fellow citizens in their time of need. Bhutan made headlines in the early 2000s when it declared the primary measure of its society’s prosperity was 'Gross National Happiness'. After spending even a short time in Bhutan you are likely to agree that people are genuinely happy and content. While the phrase may be a little humorous, it may be the best description of what makes Bhutan so amazingly different than the rest of the world in this day and age.

The Bhutan constitution guarantees freedom of religion as long as the practice of said religion does not impose on the will of others. Therefore Christianity, Hinduism, and Islam are all found within Bhutan. However, the vast majority of the country is Buddhist and has been since the 8th century when the religion was introduced. Today the Buddhist influence on Bhutanese life is unmistakable as each city is peppered with practicing monks; national architecture draws heavily on Buddhist lore; and many of the country's laws are written around Buddhist principles (such as it is illegal to kill any living creature - for example, it's illegal here to slaughter animals for meat).

For a relatively small country, it also has a very diverse climate. Down south, it's generally warm year-round, with subtropical humidity and temperatures generally between 15⁰ and 30⁰ Celsius (59⁰-86⁰ Fahrenheit). In the center there is some variety, with warm, wet summers and cool, dry winters. In the northernmost areas one will find year-round snow on mountain peaks and cool weather at their bases due to the increased altitude. 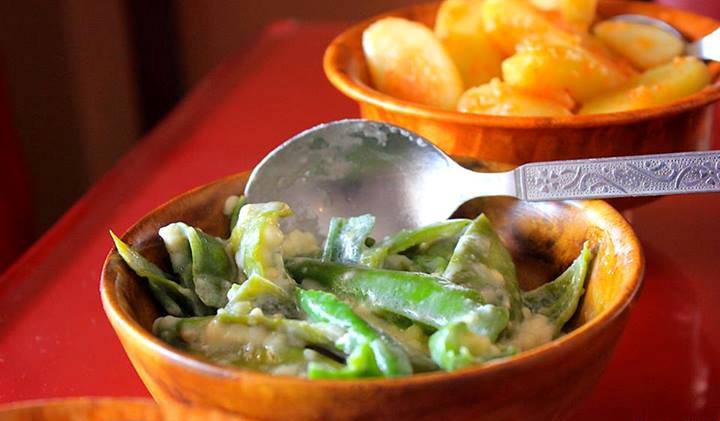 As the case with most countries in southern Asia, rice forms the main portion of the Bhutanese diet. Generally speaking, two dishes are usually served with rice at meals. These dishes can be either vegetable-based or meat-based (note: as, again, the killing of animals is forbidden in Bhutan, all meat is imported from India). The most common vegetables eaten include pumpkin, spinach, onions, green beans. And no dish in Bhutan would be complete without some helping of chilies. A few of the most popular dishes:

Ema Datshi: Known to foreigners as "chilies and cheese," the national dish (above) is a simple blend of local cheese with locally grown chilies for a spicy and creamy treat.

Bhutanese people are also are skilled craftsmen and craftswomen, hewing to traditions passed down through the generations, and much of it focused on religious context.  Bhutanese can choose to go to school and train to become master weavers, woodcarvers, sculptors, metal workers, bridge builders, carpenters, jewellery makers, and more. Schooling for these trades is provided to the population for free as part of a cultural preservation effort. 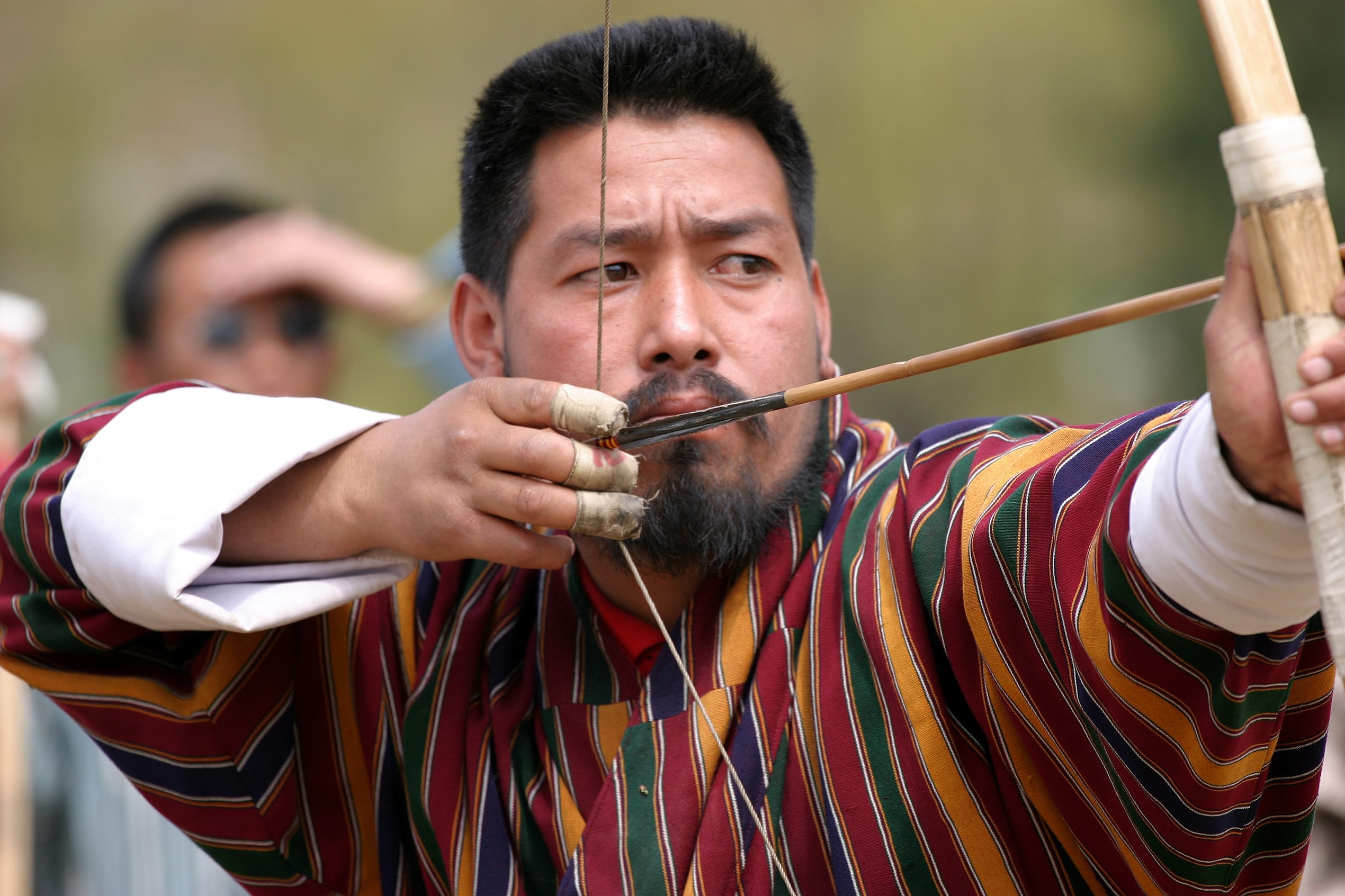 Archery goes back many centuries here but was not officially declared the national sport of the kingdom until 1971, when Bhutan became a member of the United Nations. Since then, the popularity of Bhutanese archery has increased even further, is it's showcased during local festivals, between public ministries and departments, and between the dzongkhags and the regional teams. It's culturally distinctive - including, for example, verbal "battles" in which archers display their intellectual aplomb and even literary skills whilst belitting opponents - and is a way of socialisation, communication, and development of relations between people The national flower of Bhutan is the prickly blue poppy (meconopsis horridula), hardy but with a delicate blue or purple tinged blossom and white filament. which grows to a height of 1m (about 3¼ ft.) on the rocky mountain terrain, above the tree line at altitudes of 3,500-4,500m (11,483-14,764 ft.). The flower was discovered in 1933 by British botanist George Sherriff in a remote part of Sakteng in the east of the country during an Himalayas expedition. Interestingly Frank Ludlow of the same expedition discovered a rare butterfly called Ludlow's swallowtail, another icon found exclusively in Bhutan.

The national tree, meanwhile, is the Himalayan cypress (Cupressus torolusa), growing to heights of 45m (150 ft.) in temperate zone at altitudes between 1,800 and 3,500m (5,900-11,500 ft.). It's often associated with Buddhism and found near religious structures like dzong monasteries and temples To the Bhutanese, its ability to survive on rugged terrain represents bravery and simplicity.

Moving on to fauna, the national bird, the raven. In Bhutan, the raven represents the deity Gonpo Jarodongchen, the raven-headed Mahakala, one of the country's chief guardian deities. The Bhutanese credit the raven with having guided the Bhutan's founder Zhabdrung Ngawang Namgyel to victory during the invasion from U-Tsang (Tibet) in the 17th century. The symbol of the raven head is the most prominent component of the royal crown.

Finally, the national animal, the takin (Burdorcas taxicolor, above), is a hooffed member of the bovidae family which seems to have the head of a sheep and the body of a cow. It, too, has various religious and mythological associations; legend has it that this animal was conjured up by Lam Drukpa Kuenley, a late-15th-century Buddhist monk and missionary born in Tibet and notorious for his crude and unorthodox ways of preaching Buddhism. Today this is a rare animal, and its conservation status is "vulnerable," but there's a takin reserve in capital Thimphu for those wishing to see this strange and impressive animal up close. 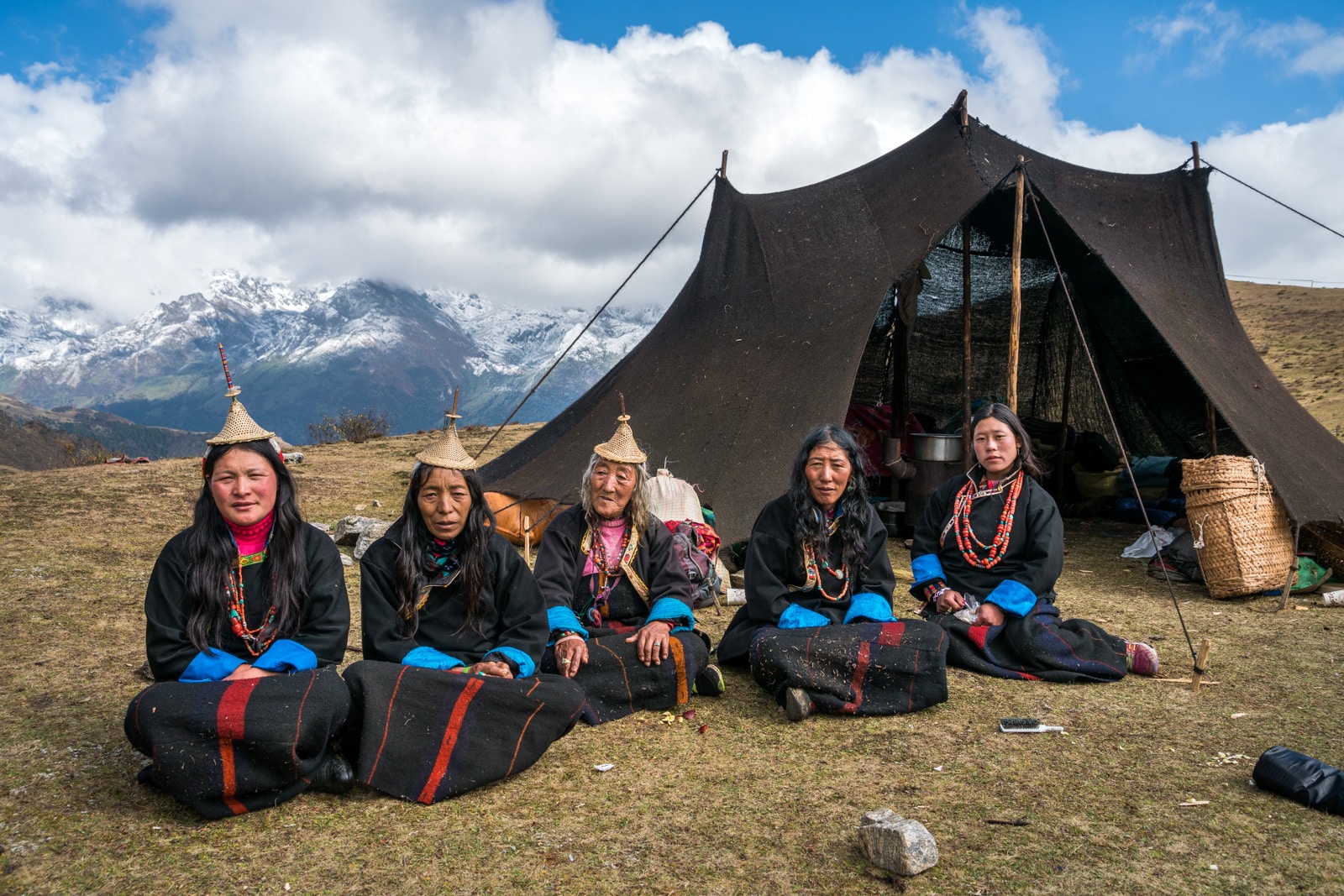 Some Key Facts about Bhutan

Nicknames: Land of the Thunder Dragon, Land of Happiness