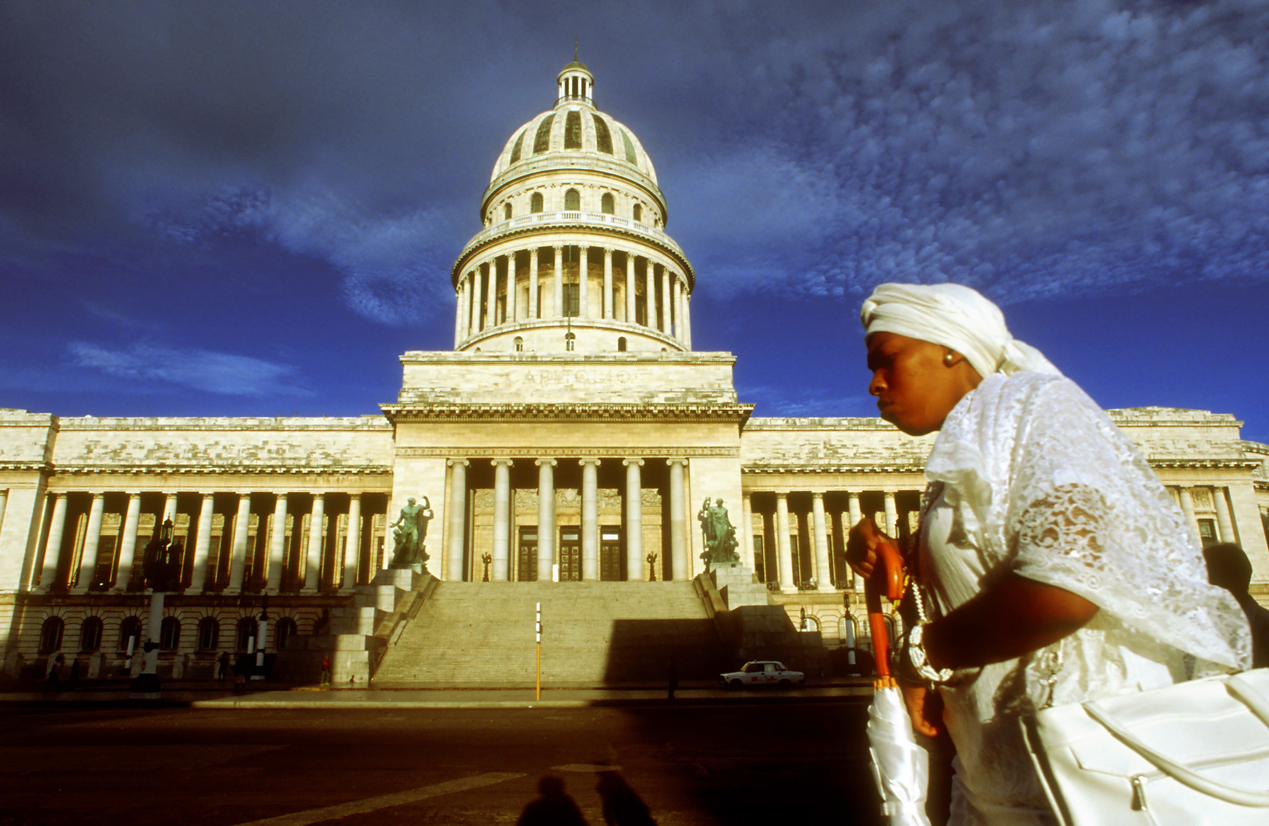 
In the Western Hemisphere, the religions brought over by African slaves have been part of the scene for centuries in Brazil, the Dominican Republic, Puerto Rico, Cuba, and most famously Haiti. But until not many years ago, they were largely condemned by the Roman Catholic church and dismissed as “ignorant” and “low-class” by all but the poor. But I’ve had the chance to observe various aspects of its Cuban variants, both on the island and in South Florida, and whether one believes in it or not, santería is undeniably a moving, often beautiful, occasionally violence-tinged tradition that has in many ways made Cuban music, art, letters and even larger society what they are today. If you visit the island,* chances are you’ll see some reference to santería, whether practitioners dressed in white (above, a lady commonly offering photo ops in Old Havana), shrines, a museum like the one in the town of Regla just across the bay (reachable by ferry), or a folkloric performance including santería dance or music. So I thought a quick introduction might be in order. 
Known more properly as “Ifá,” “La Regla Lucumí,” or “La Regla de Ocha,” santería (a Spanish word that could be translated as “saintism”) came over to Cuba starting in the 16th century mostly with Yoruba-speaking West Africans from what is now part of Benin, Senegal, and Nigeria. But because of Catholic condemnation they quickly learned to hide their devotion to the traditional gods by in effect grafting them onto Catholic saints (santos), so that when they appeared to be praying to St. Barbara they were really worshipping Changó, lord of fire, thunder, and lightning; similarly, St. Lazarus masked Babalú-Ayé (patron of the sick; remember the old Desi Arnaz/Ricky Ricardo chestnut?); and Our Lady of Mercies stood for Obatalá, the creator of humanity; other orishas include Yemayá (above), Elegguá,and Ochun). That’s why the religion is referred to as “synchretistic,” meaning a blending of two different religions. 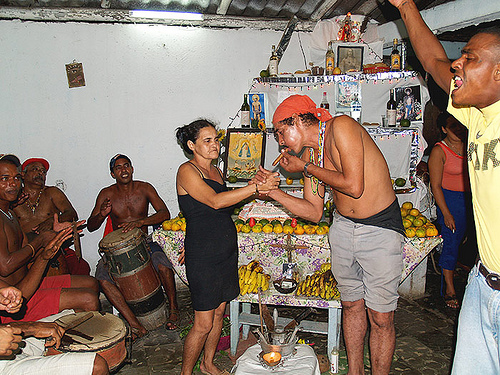 These parallel santos are referred to as orishas (a name adopted, by the way, by a popular Europe-based Cuban rap group), and religious practices surrounding them include casting shells for divination; offerings of fruit, rum, and cigars; and bembé ceremonies (left) in which dancing and drumming lead participants to supposedly become possessed and channel the orishas; ritual sacrifice can also be involved (usually of chickens, sometimes of larger animals like goats); you can get a flavor of a bembé in the video below. Santería priests are called babalaos, and shops selling candles, charms, and other santería supplies are botánicas. No longer is this stuff semi-clandestine - more than a few Cubans from all walks of life buy into it partially or completely, it's become a fairly high-profile annual tradition for a group of babalaos to issue a New Year's forecast of events in Cuba and the world (this year's forecast, inclidentally included more earthquakes climate change, and cautioned that people should also be "vigilant against matrimonial discord"). 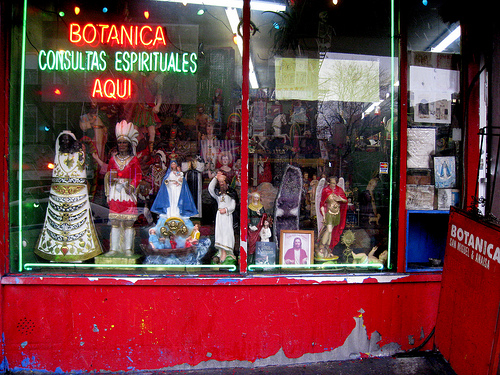 Santería has made its way here to Miami too, where I drive past botánicas all the time and see white-clad initiates in Walgreens (and it meets good ol' American ingenuity in good-luck and get-rich aerosol sprays). You may perchance recall a landmark 1993 case called "Church of Lukumi Babalu Aye v. City of Hialeah," in which the U.S. Supreme court struck down a municipal ordinance banning animal sacrifice).

I should also mention that my description above is a vast simplification; like any organic religion, santería can be pretty  complex. And you shouldn’t visit Cuba without seeking to learn a bit about this fascinating aspect of its culture, whether it’s the Regla museum, the dancing and art on Havana’s Callejón de Hamel - and yes, even the watered-down, glammed-up music and costumes in the extravagant Tropicana floor show. You can also ask at your hotel or casa particular (B&B) about other opportunities.

I've always found this to be one of the most fascinating and haunting aspects of Cuban culture, and definitely consider it a don't-miss, whether you make it to Cuba or only as far as Miami. Aché.