In Rome, the Parco Adriano Hadrian’s Mausoleum, more often referred to as the Castel Sant’Angelo, was once its tallest building, a towering cylindrical structure commissioned by Emperor Hadrian to serve both him and his family as their final resting place once they died.  However, over the course of time, the Castel Sant’Angelo was repurposed by the Popes as a prison and a fortress.

Sitting on the banks of the River Tiber and built between 123 and 139 AD, its design was based on the mausoleum of a previous emperor, Augustus’.  When it was originally finished, the top of the structure housed a garden upon which was placed a gold statue of Hadrian in a quadriga, a four horse-drawn chariot.

After Hadrian's death, his ashes were placed in the tomb.  Later those of his wife Sabina and their adopted son Lucius Aelius were placed alongside his.  Over the following decades, other emperors also had their remains interred here too.

However, by the end of the 5th century, Rome experienced more barbarian attacks, and so the structure was converted into a fortress for protection. When the Castel Sant’Angelo became the property of the Popes, it was altered greatly, and many architectural features were added.  Interestingly, Pope Nicholas III built a secret passageway that connected St. Peter’s Basilica in the Vatican to the fortress.  Called the Passetto di Borgo, it was most famously used by Pope Clement VII to flee and seek refuge in the fortress during the 1527 sack of Rome.

There is a dark and sinister side the Castel Sant’Angelo too.  The fortress was also used as a prison, with gruesome executions that involved guillotining and being burnt at the stake occurred in the fortress’s small courtyard.

However, now, the structure houses the Museo Nazionale di Castel Sant’Angelo.  And, inside are a number of fantastic displays and exhibitions that include military memorabilia, medieval firearms, paintings, and sculptures.  The weapons on display are those that were used to protect the fortress. You can take a tour or buy a ticket in the office in front of the Castel. 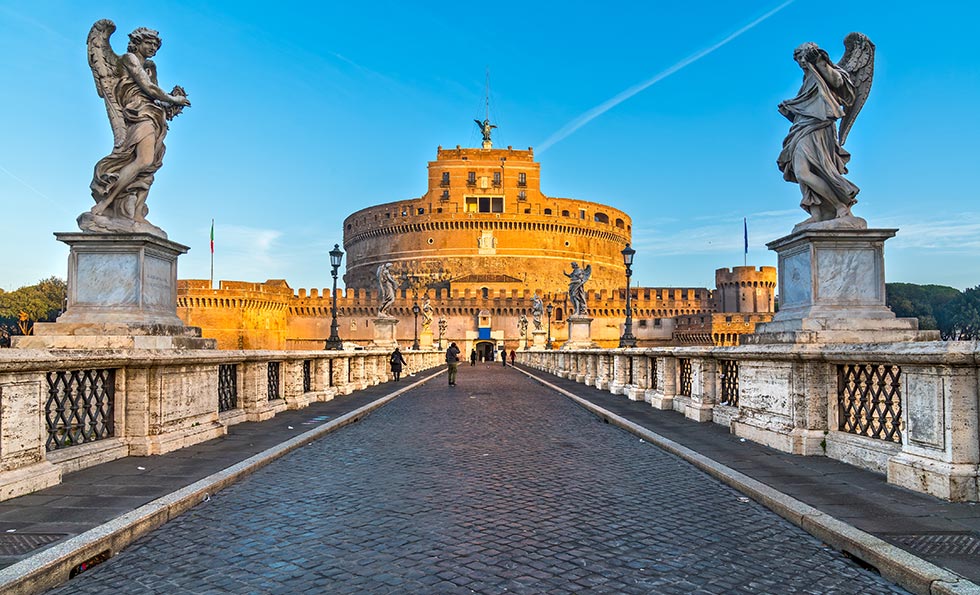 On the upper floors of the fortress you will find walls and ceilings adorned with spectacular frescoes.  The Sala Paolina, a hugely impressive room, has frescoes that depict episodes from Alexander the Great’s life.

If you continue up, you will find yourself on the terrace.  The terrace is perhaps most famous for featuring in Giacomo Puccini’s opera Tosca, in which the heroine throws herself from the terrace ramparts to her death below.  From this vantage point you can enjoy some great panoramic views.