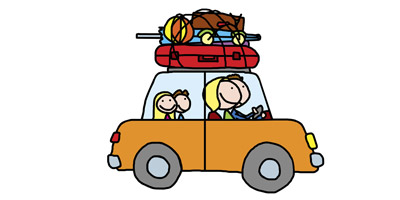 There have recently been some changes to the way toll roads work in Portugal, with roads that were previously toll-free suddenly becoming paid. Travellers headed for Portugal will come across three different types of roads: national roads, highways and SCUTs.

National roads have no tolls and they're tolerably well-maintained, particularly stretches of road connecting main cities. They have the disadvantage of having lower speed limits than highways or SCUTs. Furthermore, they aren't as direct a route between most locations. In some parts of the country they also have more traffic than highways.

If you choose to travel in a highway, know that highways are paid throughout the country. Drivers can choose to either pre-pay their use of the highway, or pay as they go along. Via Verde devices allow vehicles to use the Via Verde lane and to pass toll booths without stopping. Most rentals won't have the device unless requested by the client. Paying for the toll is very easy, however, and - with some exceptions - traffic near toll booths isn't problematic.

SCUTs are much like highways in their infrastructure, and - up until recently - drivers didn't need to pay tolls when using them. Recently, however, this was changed and now vehicles using SCUTs (which ironically stands for "Sem Custos Para O Utilizador" - No Costs For The User) are required to pay tolls.

Unfortunately, paying tolls in SCUTs, however willing one is to do it, isn't always as easy as it seems. Because they were not intended to be used as a paid part of the road network, there are no toll booths along SCUTs. This leaves many foreigners at a loss as to how to pay the tolls. Even worse, many people don't even realise they are using a toll road until they are fined for their failure to pay. There are currently four SCUTs: A22 (Algarve), A23 (Torres Novas-Guarda), A24 (Viseu-Chaves) and A25 (Vilar Formoso-Aveiro). License plates are recorded by a system of overhead devices.

There are two ways to pay for SCUT tolls. You can either request a pre-paid device, or you can pay in a post office or PayStation up to five days after you used the road.

Highways and SCUTs are a very convenient way of travelling in Portugal, and the country has an extensive and well maintained highway network. However, if you prefer to avoid the cost of using these roads, while using national roads might make for a somewhat lengthier trip, it's still a perfectly reasonable alternative.