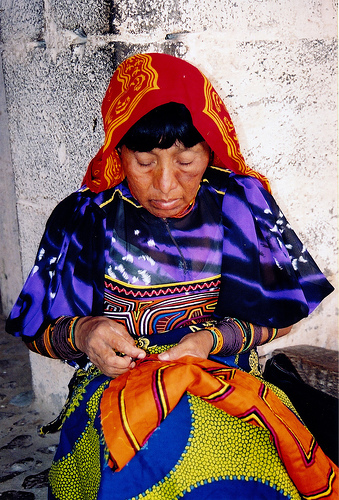 Vacation getaways that are both appealing and off-the-grid are an endangered species to begin with. But even in this rarefied company, the San Blas Archipelago, stretching across the lower half of Panama Caribbean coast, is in a class by itself. Eighty-percent uninhabited, these more than 350 islands, reachable by puddle-jumper flights from Panama City, are as pristine a paradise as you'll find anywhere in the world these days, with occasional lodges, inns, and villages of thatched huts.

What makes the place truly unique, though, is who lives here. The Kuna are a diminutive people perhaps most famous throughout the hemisphere for their molas -- not the moles of Mexican cuisine, but rather colorful cotton fabrics. But they've achieved something no other indigenous people in the Americas have: real control over their own territory of Kuna Yala and their government, officially recognized since 1938, as well as a distinctive way of life, despite welcoming some cruise ships and overnight tourism. As you might expect, most San Blas lodgings are ecologically friendly, and while many are basic and inexpensive, others are slightly more elaborate eco-lodges such as nine-cabin Dolphin Lodge (from US$170 per night) on Uaguitupo Island; Sapibenega (from US$160) with 13 cabins on a tiny private islet off Playón Chico; and Coral Lodge on the main island, El Porvenir, with pool, restaurant, and a half-dozen thatch-roofed, air-conditioned, over-the-water bungalows (from US$240, including three meals daily). Some companies also run excursions from one day to one week or more (a three-nighter with Barefoot Panama, for example, runs $360, including meals, lodging, and transportation, and Panama Travel Group can get you there from around $375, all inclusive).