Lounging by the pool and yacking it up can get old, so here is something untypical to do when killing an afternoon in Palm Springs, CA. Open to visitors is a real B-17 bomber from World War II with access throughout from the nose to the tail. This is one of the few displays that let people go inside a restored aircraft that still flies. When seeing this airplane, it brought home a small part of what a relative had gone through behind a .50-caliber machine gun at a waist gunner station over Germany.

Inside the Palm Springs Air Museum the displays include a flight simulator open to guests. Along with the snack bar, library, and memento shop a visitor is fully entertained for hours beyond seeing the famous aircraft on display. See real period uniforms, replica models, weapons, and documents.

Here is an advantage of a retirement-mecca location: Docents are retired former airmen from World War II and later service with first-hand knowledge of the aircraft on display. If a unique question comes to mind it is likely answers are available. Three large hangers house transport aircraft and power plant displays, aircraft of the Army Air Corps, and Naval Aviation aircraft.  These are aircraft that you can touch and bump into when ducking under the wing to look at something inside.

British Supermarine Spitfires did 448 mph at 26,000 feet and the one on display is a combat veteran that actually shot down a German V-1 Buzz Bomb over England. Close by, the P-51D Mustang displayed boasts 437 mph at 25,000 feet. Performance specifications when aligned between these two make for an endless discussion of the best propeller-driven fighter planes.

Army Aviation aircraft include B-25 Mitchell bomber, A-26 Invader (served in Viet Nam until 1970), Curtis P40 Kittyhawk, and P47 Thunderbolt.

Not outdone is the naval aircraft display in the museum hanger. President George H.W. Bush as a 20-year-old was shot down in his TBM Avenger airplane at ChiChi Jima, near Iwo Jima Island. His airplane is at the bottom of the sea, but an Avenger on display rests near its soulmates; SBD Dauntless dive bomber, F4F Wildcat, F6F Hellcat, F8F Bearcat, and the gull-winged F4U Corsair. 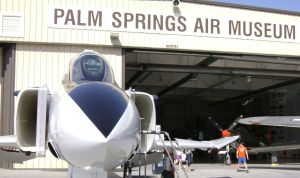 Outside on the tarmac and surrounding green areas there are a Douglas A4 Skyhawk, McDonnell/Douglas F4 Phantom from the USS Midway (including five MiG kills placard), and nearby a real MiG 21. Climb up and look inside the cockpit of these famous jet fighters and see how Spartan they are given the role is warplane.

If not already at Palm Springs, consider traveling over the Hwy 74 route to see the desert flora change with increasing elevation up to hiking trails and vacation cabins. At the peak are pine trees, lower are oak trees, and still lower the brush dominates. The observant person down on the valley floor sees what appears uninhabitable, but is in fact teeming with desert life. Otherwise, faster is the Interstate 10 freeway going into a still distant Los Angeles.