What would the perfect family getaway look like for you? For many, the perfect answer is a vacation filled with theme park fun, where your kids can meet some of their favorite cartoon characters and enjoy thrilling rides.

And of course the theme-park capital of the world is the city of Orlando in central Florida, with nearly a dozen theme and water parks large and small which attract millions of families - as well as just adults, mostly traveling in couples and groups of friends - per year; in fact, it's Florida's - and one of the USA's - most visited.   The "family-entertainment ecosystem" here has also given rise to a slew of other smaller attractions, shows, and eateries aimed catering to kids as well as their parents. Since the 1970s, this city and surrounding area have truly become a "one-stop shop" for families, with repeat visits common. A few are so taken with the area, finding that on top of its attractions, Orlando is a great place to live, thanks to its other amenities as well as its weather, generally mild much of the year, and work with the best realtors in Orlando FL to find the perfect home.

The granddaddy and still the best known of all, this complex of four theme parks, two water parks, 27 themed resorts, a camping resort, several golf courses, an outdoor shopping village, and various other venues is the most diverse entertainment empire ever built, and the main reason why most vacationers visit Orlando.

Prices have of course risen in recent years, but many still consider it a value, considering all the entertainment those entry fees include. Base prices depend on the time of year, age, and number of days you're visiting ("park hopper" combination tickets are available for up to ten days, with per diem rates dropping the more days you buy), but basically for advance online purchases they run $58-$195 per person; under age three it's free, and there are discounts for Florida residents and other categories.

Also, be prepared to wait in line a good chunk of time for most attractions - with wait times varying greatly depending on the popularity of each attraction, from practically none to an hour or more. If there are attractions for which you particularly want to skip the regular lines, the FastPass+ option allows you to choose three per day, and it's recommend that you choose them online as far in advance as possible.

Disney World's first and most park offers classics such as Cinderella's Castle, Main Street USA, Pirates of the Caribbean, the Country Bear Jamboree, and the Haunted Mansion, as well as rides geared toward young children such as It's a Small World and the Seven Dwarfs Mine Train, a Snow White themed roller coaster, spread throughout several sections: Frontierland, Adventureland, Liberty Square, Fantasyland, and Tomorrowland. The nightly fireworks over the castle and Main Street are an unforgettable favorite, as are the many appearances by Disney characters like Mickey Mouse, Donald Duck, and Goofy - both wandering around the park and in special meet-and-greets.

The name of DW's second park stands for “experimental prototype community of tomorrow,” representing the city of the future in Walt Disney’s vision. Sprawling across 300 acres, it's dedicated to celebrating technological innovation and human achievement, as well as international culture as well as celebrating human achievement.  One of the best rides here is Soarin’ a hang-gliding-flight simulator consisting of a mechanical lift system that raises you high into the air and uses a digital projection dome, artificial winds, and aromas to enhance the experience. The World Showcase's pavilions highlight the unique traditions and culture of 11 countries through music, shows, architecture, and food.

Disney's third park is its take on Tinseltown, especially its Golden Age (up till the 1960s), but also more recent fare. You can now step into the middle of the action with attractions based on both classic and popular TV shows and movies blockbusters, with seven sections including witness actors reenacting some of your favorite movie scenes. In addition to live shows there are plenty of rides, including some of DWs most exciting and intense, such as the Rock’n’Roller Coaster, where visitors hop into the "limo" of the band Aerosmith and take off at 60 miles per hour in just a few seconds, careening through the streets and landmarks of Los Angeles, including two roll-over loops and one corkscrew inversion. Explore Toy Story Land, a 4D arcade ride with Andy's toys, including a wild spin aboard Slinky Dog and trip through space on a toy rocket. Most eagerly awaited of all, Star Wars Galaxy section lets you enroll in Jedi training and visit the fantastic places where legendary Star Wars stories come to life; the nightly fireworks are also bursting with Star Wars moments.

One of world's largest theme parks is built around more than 2,000 animals across 300 species, and showcases Disney’s dedication to animal care and conservation as well as education and research; among other things, you can climb aboard an open-air truck to experience the Kilimanjaro Safari Tour. All this is supplemented by some of Disney World's most engaging rides, such as the Himalayas-themed Expedition Everest roller coaster and one of the newest, “Pandora - The World of Avatar,” based on the 2009 blockbuster film. It's a unique and exciting 3D experience on the back of a mountain banshee and journey through bioluminescent rainforest and over floating mountains, glowing fauna and flora; get to meet the Pandora Rangers in their fancy Exo-Carrier utility suits, and experience the unique rhythms and sounds coming from the “sacred place of song.” 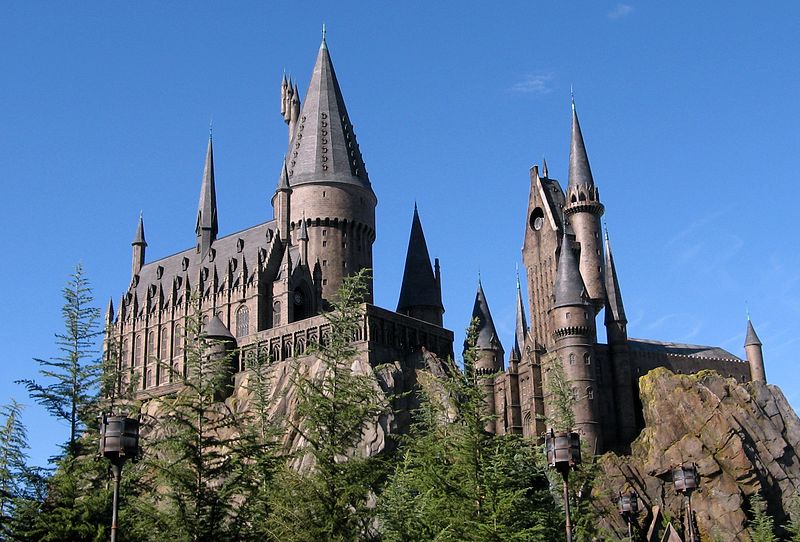 Not far north of DW, this complex is themed almost completely on the world of movies and TV. It consists of three parks and a shopping/dining/entertainment/nightlife complex called CityWalk (whose eats range from fast food and chains to world-class fine dining). Seasonal extravaganzas include Mardi Gras, Halloween, and Christmas. Basic daily prices for its two main parks start at $119 for adults/$114 for kids and for its water park $80/$75. Multipark tickets start at $174/$169, and again, there are discounts for Florida residents and other categories.

The original park is divided into zones such as Production Central, New York City, San Francisco, Hollywood, Woody Woodpecker's KidZone, and part of the Wizarding World of Harry Potter, with favorite rides such as Despicable Me, Transformers, Revenge of the Mummy, Men in Black, and Harry Potter and the Escape from Gringotts. There are also shows such as Shrek and Fear Factor, and organized parades based on TV shows and film franchises such as SpongeBob SquarePants, The Secret Life of Pets, and Dora the Explorer. And of course plenty of character appearances, from Golden-Age Hollywood stars such as Marilyn Monroes to other animated film/TV favorites like Spiderman, Optimus Prime, E.T., Homer Simpson, and Barney the Dinosaur.

This newer park is organized like a journey of exploration, where guests embark on an adventure to visit a variety of themed island: Port of Entry, Marvel Superhero Island, Toon Lagoon, Skull Island, Jurassic Park, The Lost Continent, Seuss Landing, and the other Part of the Wizarding World of Harry Potter. Rides, shows, and other attractions include 3D simulator ride the Amazing Adventures of Spider Man, the Incredible Hulk roller coaster, Doctor Doom's Fearfall, Skull Island; Reign of Kong, Jurassic Park River Adventure, Hogwarts Castle (above), Poseidon's Fury, and the Cat in the Hat.

Universal's water park is tropical theme and built around an elaborate, 200-foot-tall simulated volcano. Rides include a water coaster, drop-capsule body slides (including the USA's tallest); raft slides; and various pools including wave pools and a lazy river. 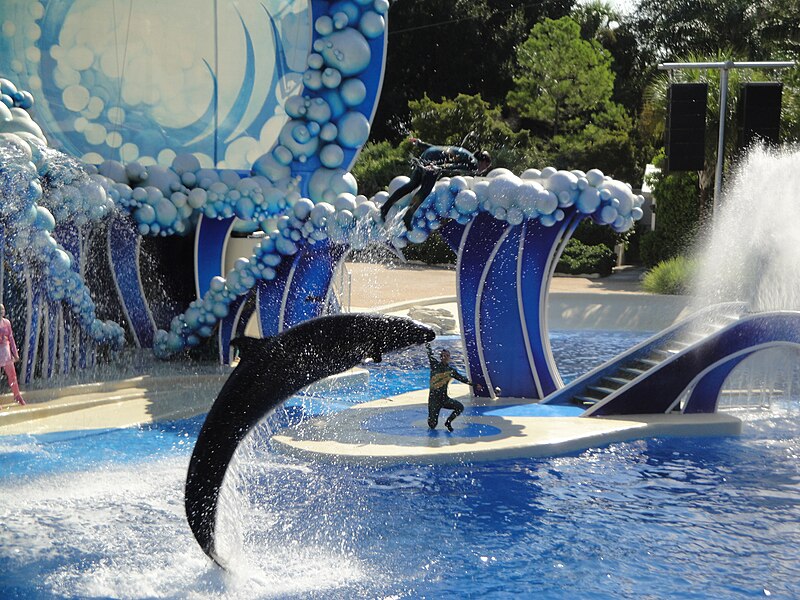 Orlando's third main theme park is actually its oldest, opening its gates in 1964, but has of course updated itself numerous times in the more than half century since. Sea World's main attractions include water-related wildlife displays and spectacles (including orca, sea lion, and dolphin shows, though they're phasing out the orcas due to opposition from environmentalists) and up-close-and-personal encounters, underpinned by research and conservation efforts. Discovery Cove is a premium area with snorkeling and swimming with dolphins. There are also plenty of rides, such as the Kraken, Manta, Ice Breaker (with Florida's highest coaster drop), and Journey to Atlantis roller coasters; the Infinity Falls river rapids ride; and Antarctica: Empire of the Penguin.

Sea World opened a 24-acre water park, Aquatica, in 2009, and it has become one of the world's most popular. It has a South Pacific/Down Under theme and a variety of raft rides, body/mat slides, lazy rivers, and wave pools. The signature attraction is the Dolphin Plunge, a pair of enclosed body slides which pass through a pool with a pod of dolphins.

SeaWorld admission prices start at $88, with a ticket for SeaWorld and Aquatica costing $108. That ranges up to $121 for a ticket including Aquatica as well as a pair of parks owned by the same company in Tampa, an hour away: Busch Gardens and Adventure Island water park (round-trip bus transfer is include in this rate).

Tags: A, In, Kids, Orkando, Orlando, Spending, Weekend, With, do, in, things, to