Part 2 of a four-part series by J. Thalia Cunningham.

The capital of North Korea has more than its shares of monuments, but presumably, people live here, too. So one day our tour group visited some places beyond the great monuments and memorials that might offer some insight into what real life in Pyongyang is like.

At a department store, a few women were nosing around the perfume counter. Upstairs we spotted a man and woman at the jewelry counter. Otherwise, we were the only folks in the store, other than the clerks. Many, many bottles of snake wine were for sale. Like the worm in a quart of tequila, the snake remains in the bottle. Some of the bottles are huge, and the snake inside corresponds to the size of its glass domain, so the snakes coiled inside the larger bottles were monsters.

Other items on display: grocery items such as cookies and biscuits, cubes of bouillon, and sacks of rice. We saw cassette tapes and CDs, too. Upstairs, a few appliances were set out for the fortunate few.

There was more action at the Children’s Palace, a marble confection where kids go after school to enhance their abilities. In one room they were all playing accordions. In another, little girls in leotards were dancing. In yet another, children practiced calligraphy. Girls were embroidering in a fourth room, using brightly colored silks to create intricate paintings with thread on canvas. 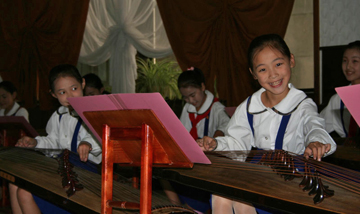 What I found poignant was that the minute we entered a room where, for example, the activity included any of the performing arts, the children would immediately begin a rehearsed song or dance designed to entertain us. The music itself wasn’t the poignant part; it was the smiles. At least I think they were smiles. In one room, I was standing off to the side so I could photograph the children, so I didn't realize that my group had left. The nanosecond the Korean teacher and students thought every Western had left the room, those smiles disappeared as though someone had slammed the door on them. Reunited with the group, I accompanied them to a performance hall that was almost as large as Avery Fisher Hall in Lincoln Center. It wasn't just size that made this an impressive space: The orchestra could be raised or lowered from the pit. The lighting equipment was excellent; this hall lacked for nothing.

A children’s orchestra played music for an hour or so and other children performed for us. I believe there was one mistake when a pipsqueak failed to catch an object while juggling. I always wondered what happened to her afterward.

What struck me as most amazing was that these children – some as young as five years of age – were not only technically perfect in their dancing, singing, juggling, acrobatics, and gymnastics. At this emotionally undeveloped age, they also acted well. If a role called for a child to portray a character or emotion, then, by golly, that child depicted the character or emotion with the maturity of an adult. Creepy, very creepy.

One night we went to a local bar where we drank beer and spirits, and noshed on dried fish jerky. Now, one member of our group was afflicted by a horrible case of glasnositis, and I didn't have anything in my medical kit to treat it. Everywhere we had gone, he'd wanted to "make friends." This meant having his photograph taken with a pod of colorfully dressed women, a group of kids, you name it. Most of the folks were accommodating.

In the bar, however, there were only two locals other than ourselves: a couple of men who, clearly, wanted a quiet evening of just hanging out, drinking, and getting away from the womenfolk, the kids, the hard labor, whatever. Suddenly, in storms this crowd of Goddamn Westerners. Worse yet, Americans, making noise. The Korean men kept to themselves, drinking their booze and gnawing on enough salty fish to make them thirsty enough to need more booze, one of those happy cycles in life. 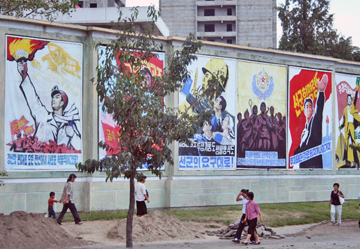 But our companion couldn't simply spend an evening in a bar without hyping it to the max. No, he bought everyone in our group plus the two Koreans a round of drinks. Then, he raised his glass in a toast, asking one of our guides, Mr. Kim, to translate. (It was easy to remember the guides' names. They were all named Mr. Kim, unless they were women.)

Our new toastmaster orated a long salute more fitting to a visiting diplomat than a tourist wearing a frumpy striped T-shirt. One of the Mr. Kims did his best to keep up with the translation. I'm not sure I was keeping up, although the American was speaking English. Finally, he finished. We hoisted our glasses and drank to this gesture of friendship between our respective countries and to the two new friends my fellow traveler thought he had made by buying them drinks.

Accustomed to observing people, whether palpating their abdomens or hanging out in North Korean bars, I watched these two North Korean men. They remained polite, but their facial expressions were priceless. Silently, they communicated to each other, through sips of booze and gnaws of fish jerky, rolling their eyes and attempting not to express their contempt for this overbearing group of assholes. Clearly, they regarded the glasnost efforts of the American as a put-down. It was a revealing moment.