Part 1 of a four-part series by J. Thalia Cunningham

While North Korea has not given up its hobby of saber-rattling at South Korea, it has made things a little easier for travelers who want to visit. I've found that getting in via Beijing is pretty straightforward, provided it’s done "properly” -- that is, by obtaining visas and making arrangements through an authorized

tour operator. Yes, tour operator – but don’t despair. The other people in the tour group were anything but boring: They included screenwriters, a novelist, a lobbyist, a philosopher – in short, travelers interested in learning how people different from themselves view the world.

Our visit centered around the famous Mass Games in Pyongyang, the capital. In this dazzling depiction of North Korean history, 100,000 gymnasts, martial artists, dancers, singers, and acrobats of all ages perform one of the world’s most remarkable spectacles. The 2011 Games are scheduled for August 1 through October 10. 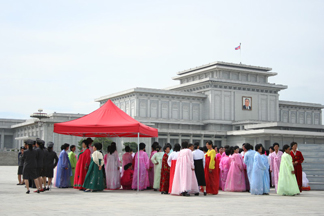 Before we get immersed in the Games, though, know that Pyongyang itself is a spectacle. Its centerpiece is Kim Il Sung Square (right), a vast plaza rimmed by stately government buildings and museums.

Visitors may ride the elevator to the top of the 492-foot (150-meter) Juche Tower (below, left), a soaring obelisk, for stunning views of the city. Standing up there, I suddenly sense architectural similarities to Washington, D.C.

Not to be outdone by France, Pyongyang also has an Arch of Triumph, although this one celebrates Great Leader Kim's Il Sung’s liberation of North Korea from Japan. Actually, it was the Soviet Union's army that disarmed the Japanese, but our guide focused on the fact that this arch is taller than its counterpart in Paris. Broad avenues of eight lanes unblemished by cars sweep by other impressive testimonials like the Korean Workers Party Monument, a trio of massive Things à la Addams Family holding a hammer and sickle fromHome Depot. Then there's the Victorious Fatherland Liberation War Museum, containing American planes, tanks and other military effluvia captured during or after the Korean War. Prior to exploring the most famous of these, the USS Pueblo, visitors are treated to a short film describing the unstintingly brave efforts of the Korean people against "U.S. imperialists"(yup, there’s an English version). Agree or not, there's no question how fascinating it can be to hear about yourself from someone else’s point of view.

Plenty of additional lecturing is provided for us imperialist Westerners at the Grand Monument (below), a 65-foot (20-meter) bronze statue of "Great Leader" Kim Il Sung flanked by larger-than-life bronze figures depicting Korea’s "triumph" over Japan and the United States. This is the DPRK’s most sacred site. Every visitor, local or not, is expected to bow to Kim's statue. In addition to bowing, our group bought flowers to place at its feet. Oh, and any photographs taken must include the entire statue from head to toe. 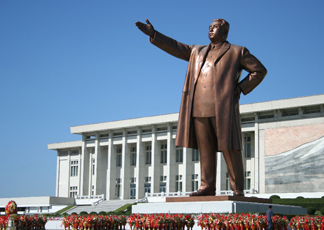 Visiting the nearby Kim Il Sung tomb is considered an obligatory and solemn occasion requiring formal dress, a more formal protocol, and a prescribed series of bows in the chilled room where the leader still lies in state 16 years after death. Akin to the tomb of that other great leader, King Tut (who refuted the adage, “you can’t take it with you”), this mausoleum displays gifts Kim received from heads of state such as Muammar Qaddafi. If all this bowing and scraping sounds silly, think about being presented to the Queen of England, and just go with the flow. A Visit to the DMZ

The famous DMZ, the 2.5-mile (4-km) Demilitarized Zone separating North and South Korea, may actually be the world's most militarized piece of real estate. It's home to more than 2 million soldiers, a million landmines, a Disneyesque propaganda village with the world’s tallest flagpole to show those South Koreans what they’re missing, and tunnels large enough to drive tanks through. From the DPRK side, in only one building, only one room, is it possible to cross the border between North and South Korea – and that is done by circumnavigating the table. When you take a DMZ tour from Seoul, you don’t see squat, in my opinion; from the North, you get into the DMZ’s core.

But DPRK isn’t all pomp and politics; real people live here, too. So in Part 2 of this series we'll get away from the monuments, go to a department store, visit an amusement park, and mingle (a little) with the locals.