You might think London hotels would be sold out or vastly marked up during Royal Wedding week. Well, you might be wrong. Seems a lot of folks got the idea that it would be a total Picadilly circus, and decided to stay away. Travelocity, for example, just reported there’s plenty of availability, affordability, and even bargains – so if you can scrape the time together, you can get thee thither for Wills and Kate’s Excellent Adventure.

When it comes to hostelries, of course, the city on the Thames has some of the best and most famous on the planet, from cutting edge to resolutely traditional, with names like the Savoy, the Ritz, the Metropolitan, One Aldwych, the Park Lane, and so forth. On my last trip to Britain’s capital, I had the pleasure of staying in or visiting several teddibly upscale properties, and I highly recommend any of them as your base in London – during RW week or any time. Five to check out for checking in:

The Athenaeum  We’ve blogged about this 123-room property on Tripatini before, because it serves up a great mix of central location (a short stroll to Picadilly and Leicester Squares), gentility (it's in swank Mayfair, with soothing views right across the street to bucolic Green Park), and a quirky contemporary flair (check out that groovy mother-of-pearl bit of business behind the reception desk). The latest twist since its mega-million makeover in 2009-10: this hotel is, as we put it in our previous post, “so green it photosynthesizes,” thanks in part to a “living wall” of plants growing up the façade – never seen anything quite like it! Rooms next week and in general start at £195 per night. The Bentley  And now for something a bit more traditional and even a tad, well, grandiose. There are a number of fine hotels out south of Hyde Park in Kensington, near several key museums as well as funky Notting Hill and tony Knightsbridge, one of London’s prime shopping areas (Harrod’s and Harvey Nichols are out here). But this 131-year-old 64-roomer owned by Hilton’s Waldorf Astoria group is a standout, positively dripping with Old-World-style marble, crystal, and gilt. If you like your opulence antique-style and shiny, your royal hiney will rest just marvelously here. And if you can't afford a cab after paying the bill, fear not: the Bentley is also convenient to the Tube. From £210 nightly. 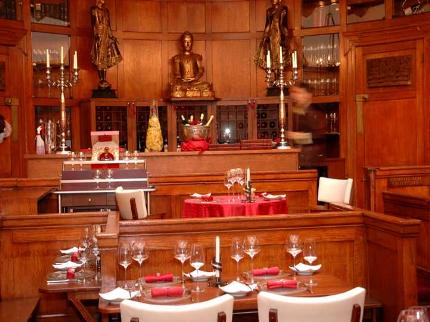 The Courthouse Doubletree by Hilton  Hear ye, hear ye! Of our selection here, this contemporary-flavored property is the one most in the middle of “the action,” specifically shopping, theater, dining, and nightlife. It’s on Regent Street, with Carnaby Street right at the doorstep and Picadilly a short stroll away. The hotel itself is a former magistrate’s court, and not just any old one, but one which tried Oscar Wilde, Mick Jagger, and John Lennon. Several cool interior details remind you of those days, such as the marvelous Silk restaurant, in a woody former courtroom (right), and holding cells turned into posh party nooks as part of the bar. Even if you don’t stay here, I simply must insist you make time for a scrumptious Asian fusion meal at Silk. From £210 nightly. The Royal Horseguards  If the Bentley is très elegant in an intimate, Continental manner, this elaborate Victorian pile in Whitehall is also very classy but in a bigger, more bombastic way, and I mean that in the best way possible. Owned by Thistle Hotels, the Royal Horseguards is near Charing Cross and Trafalgar Square, across from the London Eye and the nearest of our selection to Parliament and Westminster Abbey, where I hear a certain someone’s getting hitched next weekend. The feel in the public spaces and 261 rooms is contemporary with traditional touches (the building dates from 1884, but the hotel from 1971). We once held a Tripatini soirée here during World Travel Market, and it was all the more memorable an occasion because of the surroundings (not to mention plentiful amounts of the Horseguards’ rich signature tipple, the Cavalry Cocktail). From £222 nightly (£375 with “royal wedding package”). 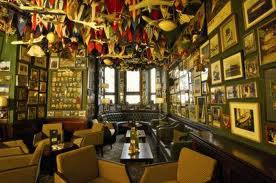 The Stafford London Kempinski   Last in our list but only alphabetically, this also historic property in St. James near Picadilly and Green Park is discreetly tucked away down a side lane, and offers impeccable service and a somewhat tweedy, preppy feel that I found very comfy indeed. All 105 rooms are being gradually modernized and updated, and my ground-floor “Carriage House” digs off the rear courtyard couldn’t be more appealing. We’ve also blogged before about the Stafford, due to its particular affinity to visiting Yanks, dating back not just to its service as officers’ quarters during WWII, but even to the early days of the transatlantic ocean liners. We’d heard that the delightfully cluttered bar celebrated Thanksgiving by concocting a special Pumpkin Pie martini and…well, you can read about it here. Anyway, don't forget to ask to see the basement bomb cellar and memorabilia left over from the Blitz. From £257 nightly.

*Stays at some of these properties were offered on a comp basis.