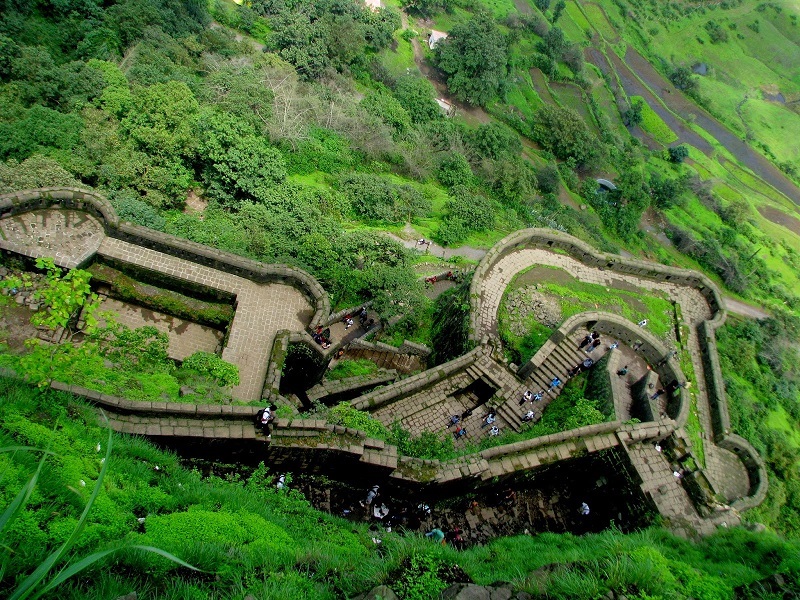 Lonavala (aka Lonavla) is a fascinating hill station in the Pune district of Maharashtra State, about an hour inland from Mumbai/Bombay. Separating the Deccan Plateau and the Konkan coast,  Lonavala is a very popular monsoon destination for Indians, from early June through approximately October, when its scenic locations become lushly green and the waterfalls are in full flow. Here are its half dozen most popular draws:

Up in Lonavala's Sahyadri Hills, separating the Indrayani basin from the Pawna basin, it's in one of the more popular trekking areas near Pune and Mumbai. Lohagad Fort was designed in the shape of a scorpion's tail of a scorpion, and has four entrances, Maha Darwaja, Ganesh Darwaja, Hanuman Darwaja and Narayan Darwaja. The fort makes an ideal trekking destination for trekkers because of its accessibility, ease of trek and lush green surroundings. Malavli is the base of the trek, which is around 7 kilometers from Lohagad. This fort offers aerial views of Karla and Bhaja Caves (see below) as well as Pawna Lake.

Also known as Bhaje Caves, these are among the most popular Hinayana Buddhist grottoes in Maharashtra, a group of 22 dating back to the 2nd century BC, and situated on an ancient trade route. Caves 12 and 8 are the most important caves, including elegant architecture such as a group of 14 stupas, which enfold an irregular excavation with five stupas inside and nine outside. There is also a waterfall near the caves where visitors refresh themselves with a dip.

This complex of ancient Buddhist rock-cut caves are excavated nearly 100 metres up on a high spur on the north flank of the Indrayani Valley. Karla is one of the most famous centers of early rock-cut architecture in India. These caves were developed over two periods - from the 2nd century BC to the 2nd century AD, and then later in the 5th to 10th centuries The complex consists of 16 excavations; cave 8 is the grandest and the largest of India's chaityagrihas (Buddhist shrines, sanctuaries, temples or prayer halls). Here you'll see well carved sculptures of humans as well as animals. The arched entrances and vaulted interiors are the main highlights of the caves. The complex also houses a Buddhist monastery dating back to the 2nd century BC.

This is a masonry dam built in late 1860s for the Great Indian Peninsular Railway as a source of water for their steam engines. Water was carried through cast-iron pipes from the reservoir to Lonavala, Khandala and the reversing station of the railway. Located in the backdrop of scenic hilly terrains, There's also a waterfall nearby, formed when the water gushes out through the dam during the monsoon months.

Also known as Waghdari, this scenic viewpoint near I.N.S Shivaji derives its name from its resemblance to the shape of a leaping tiger. It is a cliff top with a sheer drop of over 650 m and offers spectacular views of forests, lush greenery, waterfalls and lakes around. There is a small waterfall nearby which flows during the monsoon season only. When the stream flow is medium, the place offers adventure activity like rafting. The place is perfect for trekking as it offers spectacular views of the surrounding valley. The sunrise and sunset views from here are mesmerizing.