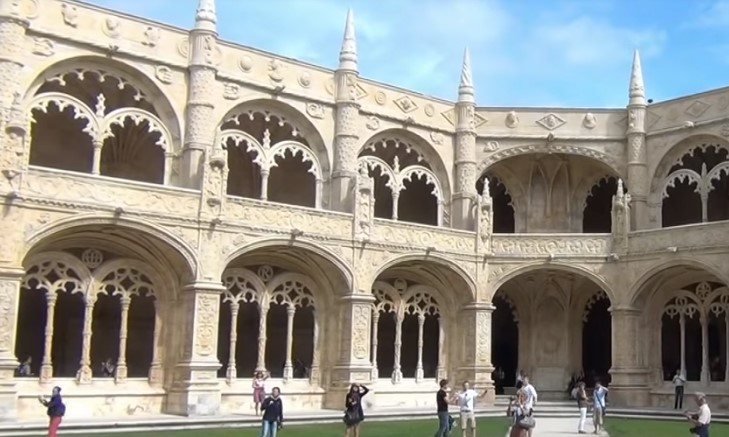 Especially for travelers to Europe on a budget, there's no better place to hang out than the capital of Portugal, considered one of the continent's most affordable countries. But even apart from that, it's a romantic city with amazing history, culture, dining, and architecture including Gothic, Renaissance, neoclassical, Art Deco, and more. Here's my list of the top ten things to do - mostly free or inexpensive - on your visit to Lisbon:

Lisbon's oldest district, stretching from the Tagus River up to crenellated São Jorge Castle, is a cobblestone-paved charmer that dates back to the 8th-12th centuries, when what is now Portugal was ruled by Islamic dynasties originating in North Africa. Here you'll find the city's 12th-century cathedral and other churches and monasteries/convents, as well as handicraft shops and many typical Portuguese restaurants, as well as bars where the country's traditional fado music (see below) is performed. And the views out over the city from its miradouros (overlooks) are inspiring.

When up in the Alfama, don't forget to continue to the top and visit this grand landmark, built after the 12th-century Christian reconquest of the city on the site of earlier Visigothic and Muslim fortifications. Once occupied by both Portugal's kings and archbishops, its ramparts and 11 towers (some of which house historical exhibitions) are a delight to explore - and of course offer sweeping city and river views.

Explore the Rest of the City

Lisbon is very walkable, and in addition to doing it on your own, there are all manner of walking tours to chooses from - several even free of charge. One of the most prominent, bookable online, is run by Sandemans, typically two to four times per day. Starting from center city's Largo de Camões Square, the three-hour tour takes you through the Chiado, Alfama, and Bairro Alto districts, explaining the architecture and history along the way. Don't forget to tip!

Enjoy Fado for Little or Nothing

Portugal's soulful answer to Spain's flamenco is a must, but many venues are overpriced tourist traps. But there are a handful of great tascas (bars) and eateries where you can take in performances for the price of a couple of drinks and/or petiscos (the Portuguese version of tapas) - and sometimes even totally for free; such as Associação do Fado Casto, Povo, and A Tasca do Chico.

Check Out the National Tile Museum

Housed in the one 16th-century Madre de Deus convent a bit outside the center of the city, the Museu Nacional do Azulejo (MNAz) shows off the colourful glazed tiles that are one of the central prides and joys of Portuguese culture, and adult admission is just 5 euros (2.5 for seniors and students). The museum also has a free app in English as well as Portuguese which works as an audio guide (you can download it right in the lobby with free WiFi).

Another Portuguese pride and joy, but on the culinary front, pastéis de nata (also known as pastéis de Belém; singular pastel) are egg tarts invented in the 18th century by the monks of Jerônimos Monastery in Lisbon's Belém district. Right near the monastery, the Pastéis de Belém factory and shop has been turning them out since 1837 using the original recipe, and you can buy one for just 1.50 euros.

Ginja (aka ginjinha) is a cinammon-infused sour-cherry liqueur that's a specialty of Portugal., often served as a shot, costing just a euro or two. Delicious!

Old-fashioned, picturesque street trams are famous in Lisbon, and the one to pick for the best views through the city is the No. 28. The route starts in Martim Moniz and jangles its way on a loop out to the Campo de Ourique neighborhood, passing many of the city’s main attractions through the way. A ticket costs just 2.90 euros.

Have a Day at the Beach

An easy train ride/drive to the coastal suburbs of Cascais and Estoril you'll find lovely beaches such as Praia Tamariz, Praia da Conçeção, Praia da Rainha, and Praia do Guincho. A lovely warm-weather treat for yourself, and to watch locals at play!

Just 45 minutes away by train, Sintra's old town, situated amid a nature reserve, is a UNESCO World Heritage Site thanks to its past as a refuge – especially in summertime – for Portugal’s royal family and courtiers, and its gorgeous palaces are like real-life fantasies.

Tags: Elite, LISBON, UK, attractions, do, from, guide, in, things, to, tour, travels