THIS WESTERN RESORT TOWN IS A BARGAIN NOW I've been skiing, dining, watching wildlife, and visiting spas in Jackson Hole, Wyoming, and I'm here to say that if you're able to get there before April 3, the last day of winter season, go for it. This area has gotten a ton of snow, so the Tetons look beautiful, the sled dogs feel good, thousands of big-antlered elk are still lounging on the lowlands (the National Elk Refuge) right outside town, and hotels in Jackson Hole and Teton Mountain Village, the ski resort, are dealing. And need I remind you that Jackson Hole Mountain Resort, with its challenging steeps and bowls, its glades and groomed half-pipe blues, is the Pebble Beach of skiing?

Five airlines serve Jackson – six, if you, unlike me, can afford Marquis Jet – and they land at the only airport in the United States that's within a national park: Grand Teton National Park. Unlike most airport baggage rooms, this one has picture windows, as well it should: While you're waiting to collect your skis, you look out at the aptly named Grand Tetons. Anyone remember when car rental companies kept their cars right at the airport? That's the deal here. 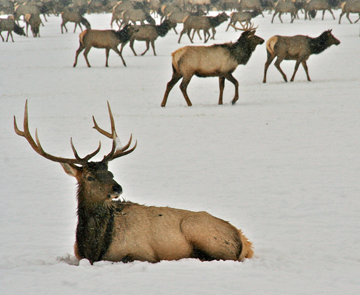 As you drive into town, you'll see elk herds on the driver's side of the car and mule deer (they're a lot bigger and better looking than those scrawny East Coast whitetails) on the hill to your right. You'll also pass what looks like a sprawling stone ruin on that hill: That's the National Museum of Wildlife Art, and what could be better than a whole museum full of paintings and sculptures of furry and feathery creatures – no still lifes or portraits of dead white males, no religious allegories or abstract puzzlements.

One clarification: I said “as you drive,” but you don't have to rent a car at all. You can take a taxi or the shuttle into town ($31 round trip) and, if you're staying in town, take another shuttle when you go to the ski area ($3 one way). Also, some of the hotels will pick you up and run shuttles to the slopes. Personally, I'm a great fan of ski trips that don't involve rental cars.

This is not Aspen; you needn't look hard to find inexpensive lodgings, such as the Jackson Hole Lodge, where rates have come down to $81. The much-praised Best Western Lodge at Jackson Hole (the “at” in there makes it a different hotel) is now asking just $139 plus 6% tax ($147 and change) per night, and that includes breakfast. Or you could buy the Lodge's Black Diamond Ski Package, which costs $1,317.14 for two, including a very comfortable room, hot breakfasts, transfers to the ski area, and five days of lift tickets. A la carte, that would cost you and your favorite ski pal about $1,700. 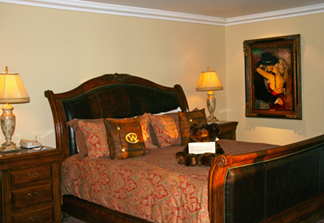 Move up a bit in price and you could pay as little as $199 for a $359 room at the Wort Hotel (right), an authentic Western landmark and a member of Historic Hotels of America. The Wort also will arrange packages for skiers. The operator quoted me a six-night stay for $1,780 that includes the shuttle to the mountain, four days of lift tickets for two, and breakfast (the Snake River Burrito, crammed with eggs and chorizo, is a fine way to start the day). You could book through the website, but you might do better by calling the toll-free number: 800.322.2727.

Lodging on the Mountain

Up in Teton Mountain Village, at the ski mountain, RockResort's Snake River Lodge & Spa is offering rooms at 40% off: i.e., from $159 plus a $25 resort fee. That's slopeside, and the indoor-outdoor Avanyu pool and hot tub are a delight after a day of skiing or boarding.

For something different, Spring Creek Ranch occupies a private reserve on a bluff above Jackson that's dotted with lodge-style mansions for which people have spent millions. On the off chance that you're reluctant to pay a week's rental for one of these babies, you can stay at Spring Creek's inn ($199 a night including breakfast; try the trout and eggs with Manchego Hollandaise sauce) or in a one-bedroom condo, which starts at $290 -- more than an inn room, but you get a fireplace, a kitchen, and room to put the kids on the couch.

While you're there, arrange for a nature tour. In one day with lodge naturalist Kurt Johnson, my wife and I saw elk, moose, bald eagles, trumpeter swans (with wingspans that are actually two feet longer than those of bald eagles), mule deer, bighorn sheep, Barrow goldeneye ducks (cute!), and perhaps my favorite sighting of the day, a coyote that was willing to amble across an open field so we could get a good look at him. And if you're not a skier at all? Wait until mid-April, then check into the Four Seasons Jackson Hole in Teton Mountain Village. This Adirondack-style lodge has extraordinary food (the tender port-marinated elk loin shown here is worth the trip), a spa, nature programs, and art, with eye-popping works by the likes of Romare Bearden and Joan Miro all over the place. Above all, this is a chance to enjoy Four Seasons service and style at, y'know, Two Seasons prices: $295 for a room that normally costs $725.