When I first visited Playa Nicuesa Rainforest Lodge at the end of 2004, what struck me most was how in heaven did this amazing high-end Costa Rica eco-lodge come to exist in the middle of a jungle on the sea, with nothing else around? 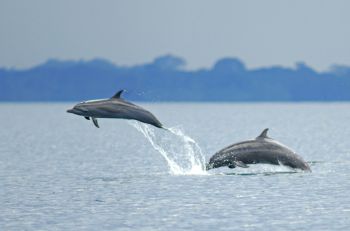 The question is a valid one given Nicuesa Lodge’s completely isolated location in southern Costa Rica. It is a wild place of dense steamy rainforest and tranquil ocean, intensely populated by thousands of species of tropical wildlife. Playa Nicuesa is a little crescent-shaped beach and small bay on the pristine Golfo Dulce – “Sweet Gulf” – a critical habitat for migrating Pacific Humpback Whales, dolphins and hammerhead sharks. The region is dedicated to environmental conservation, from the world-famous Corcovado National Park on the Osa Peninsula to the Piedras Blancas National Park and three other private reserves.

What keeps Playa Nicuesa Rainforest Lodge so unique and private is that the lodge is accessible only by boat. Almost directly across the gulf from the town of Puerto Jimenez, Nicuesa Lodge’s 165-acre private preserve is backed by rugged mountains and wild jungle of the Piedras Blancas National Park. There are no roads, and there is no development. 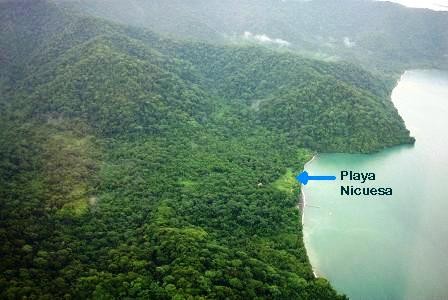 So, how did a high-end eco-lodge come to be in this pure, remote place?

The story starts with Nicuesa Lodge owner Michael Butler, when he was a young university graduate student studying urban planning in New York in 1992. The tale involves dreams, adventures, faith, hope and a lot of hard work, all leading to the successful Costa Rica rainforest lodge that stands today. Butler had an opportunity to go to Colombia to work on an urban planning project, but first he needed to improve his Spanish language skills. He took a few months to backpack through Central America, which brought him to Costa Rica for the first time.

He went to Colombia, finished his degree and was working in urban planning in New York. Then in 1994, he visited a friend in the Peace Corps who was stationed in Costa Rica. He traveled all over the country and especially enjoyed the Osa Peninsula and Golfo Dulce. “I met some people and thought it would be neat to live there,” said Butler. But like most people, he returned home and got busy with work and life. Although he never forgot Costa Rica.

He met a girl – Donna, now his wife, who was working as an environmental planner in New York. The couple talked about Michael’s dream of creating an eco-lodge, and in 2000, got serious about starting the business. “We wanted to build something in a pristine place and have as little impact as possible,” said Butler. “We were really going for sustainability when no one knew what that was.” 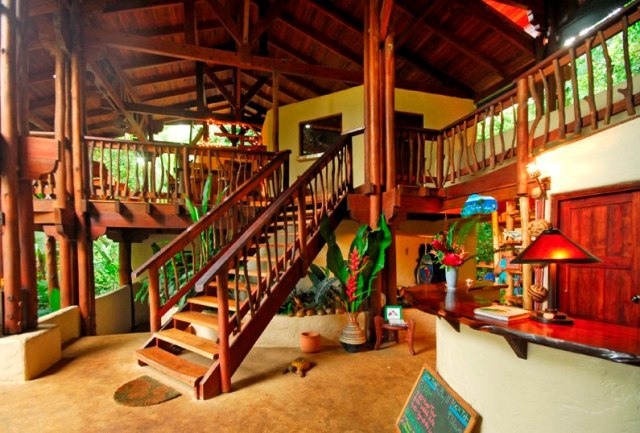 Butler returned to the area he liked best in Costa Rica – the Osa Peninsula and Golfo Dulce. “I fell in love with that area. It was perfect for what we wanted to do,” he said. “At first we thought we’d buy a lodge to fix up, but we ended up falling in love with the area where we are” – which meant building. The Butlers bought their property – an abandoned cacao plantation returning to jungle – in 2001, the same year they married.

In order to supervise the building, the couple had to move to the remote location. Butler said they rented a small rustic cabin on the next beach (San Josecito). It had an outdoor bathroom, one generator-powered light bulb to use to cook at night, and a propane gas stove. They used a large cooler with blocks of ice to store food, went to town once a week by boat for supplies, and their only mode of communication was a marine radio. 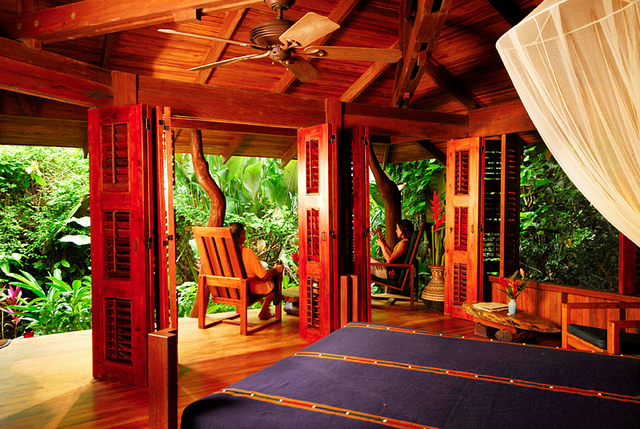 For construction materials, it wasn’t like they could get a delivery truck from the nearest hardware store. The Butlers had to buy a barge to transport any materials, including a backhoe once or twice. The main lodge and most of the cabins were built in two years. The couple really paid attention to sustainability, and also the area’s seismic activity. “We made sure we knew where the wood came from, that the gravel didn’t come from the beach, etc.” said Butler.

The wood used came from tree farms and naturally fallen trees pulled out of the forest. Roofing materials are made of recycled plastic banana bags. They had to build the gravity-fed water system from the mountain springs, and invest in a high-tech solar system to generate electricity. “It was really labor intensive. It was a whole operation with like 20 guys living there to build. We ended up going with all local guys,” said Butler. An eco-lodge is born

Playa Nicuesa Rainforest Lodge opened in April 2003 as one of the first true eco-lodges in Costa Rica. Operating now 12 years, Butler says the lodge has improved greatly over the years. “Things have changed so much now,” he said. “There’s cell phone service at the lodge, electricity, a chef who cooks your meals ….” More cabins, a yoga deck, a solar drying room and employee facilities have been added; gardens and orchards planted. The Costa Rica rainforest lodge really is a paradise – appreciated more than ever, Butler says since he doesn’t live there full-time anymore. The Butlers first son, Leo, was born in 2004 and spent his first years at the lodge. When the Butlers second son, Henry, was born in 2007, the family needed to move back to “civilization”. For owner Michael Butler, the best part about the maximum 30-guest lodge is the uncrowded pristine nature. “You experience a big rain in the rainforest. Go out for a kayak at sunset and you’re the only person out there. And then you have a bartender making you a cocktail and a chef cooking you a fresh meal,” he said. “You go on the waterfall hike, and it’s just you. There aren’t six groups coming up behind you. Our lodge seems to always be the highlight of people’s vacations, something they always remember.”