If you visited the beautiful property of Playa Nicuesa Rainforest Lodge four decades ago, instead of a high-end Costa Rica eco-lodge, you would have found only “chocolate trees.”

Cacao tree plantations were once plentiful in Costa Rica’s southernmost region of the Golfo Dulce and Osa Peninsula. Cacao was an important export market for Costa Rica until the fungus blight called Monilia destroyed 95% of production in 1979.

On the Chocolate Tour at Playa Nicuesa Rainforest Lodge, you will learn about cacao’s rich history in Costa Rica, what the cacao fruit looks like, how it is harvested and how to make delicious natural chocolate from raw cacao seeds. The best part is eating your own freshly made chocolate treats after the tour! Cacao has a long history in Central America. Cacao beans were revered by indigenous peoples and even used as currency in Pre-Columbian times; in Costa Rica, cacao continued to be exchanged for goods up until the 1930s. Indigenous peoples ate cacao beans for energy since they are naturally full of caffeine, are an antioxidant, a source of fiber, and are high in Vitamin C and serotonin. This leads to the theory of how cacao spread throughout Central America. It is thought that migrating people ate cacao while walking, for energy, and threw the leftover bits of seeds to the wayside, which then germinated and grew into trees. 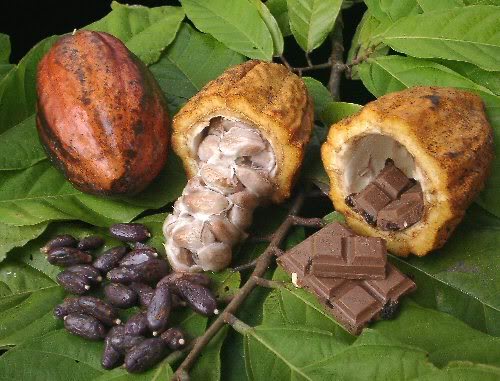 Nicuesa Lodge still has cacao trees on the property, and harvests unaffected fruit. On the Nicuesa Chocolate Tour, you will see what a cacao fruit looks like and how to dry the seeds for chocolate preparation. Then, you’ll go to Nicuesa’s kitchen to roast the cacao seeds in a pan on the stove and grind them into powder. Afterward, you will make hot chocolate – using milk and sugar in the European tradition instead of the indigenous natural bitter drink made with only cocoa and water. You will also make chocolate paste and form shapes to cook and eat as dessert later. By the end of the tour, you will know how to make homemade chocolate with real chocolate seeds.