We arrived before 10 am, and our VIP group was hastily ushered to seats arranged right in front of one of the main yatai – a festival float on wheels, presented before Sakurayama Hachiman shrine, the main protector of the city since it’s enlargement in 1683.

The elaborately decorated float was removed from the Yatai Kaikan (Festival Float Museum), just for this special occasion – The Takayama Matsuri (Takayama Festival) that takes place twice a year – October 9-10 and April 14-15 in the old city of Takayama in central Japan’s Gifu Prefecture. Considered among Japan’s three top and most beautiful festivals (the others being the Gion Matsuri in Kyoto and the Chichubu Matsuri in Saitama), it dates back 350 years, and on November 30, 2016, it was among the 33 float festivals in Japan designated collectively as a UNESCO Intangible Cultural Heritage.

The evening of October 9th, the first night, called yomatsuri, is quite dramatic. Eleven floats – all national “significant intangible cultural assets” – are pulled through the streets of the old town from 6 to 9 pm, aglow in the crimson light of nearly 100 traditional, oblong-shaped Cochin lanterns. However, our group was here for what can be considered an even greater highlight -- the karakuri ningyo (mechanical doll) performance (below).

These sophisticated puppets – also “intangible folk cultural properties” – are a specialty of central Japan (Chubu region). They were produced in great numbers in the 17th through 19th centuries. Sadly, many were destroyed during World War II, making the remaining dolls truly special. Their intricate and delicate movable body joints are considered the precursors of mod­ern robots. The handlers require years of training to make them flip, dance and move their heads, conveying sincere emotion. The dolls themselves are true works of art, and today, Karakuri master Tamaya Shobei IX, whom I was honored to meet during the Aichi Expo in Nagoya in 2005, even has a doll in the collection of the British Museum. 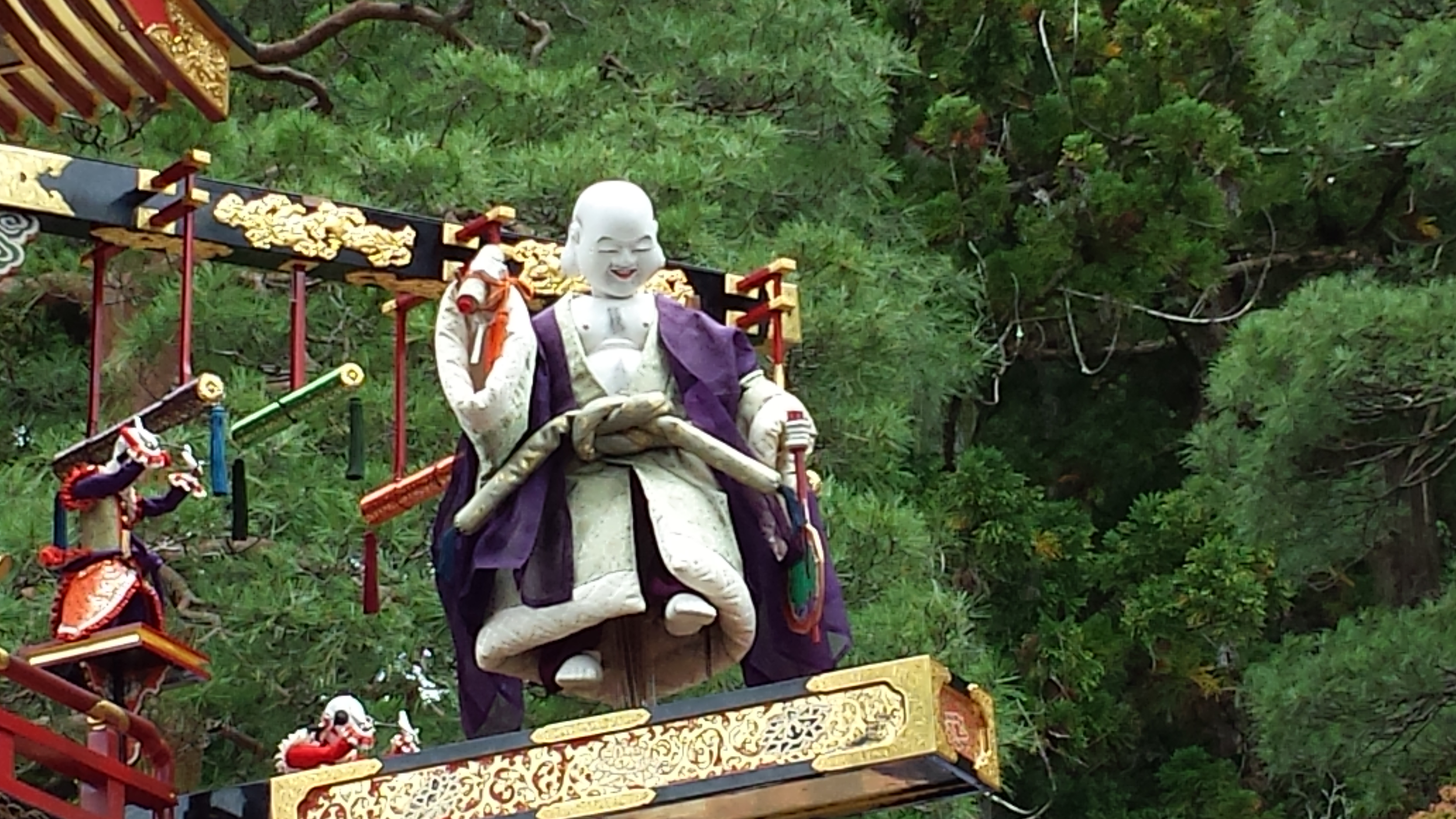 First the mayor and other officials spoke, and then the music and karakuri performance began. The puppets greeted us with smiles and gymnastic tricks along the perimeter of the Yatai, with their handlers maneuvering them from inside. Their performance was enhanced by the sounds of shakuhachi flute and taiko drumming. It lasted for about half an hour and was quite entertaining.  Afterwards, I had a chance to talk to one of the doll manipulators, who began training as a child and now trains other neighborhood children. He revered the festival with pride, noting that he and his younger apprentices actually practice in a back room of a nearby teahouse! 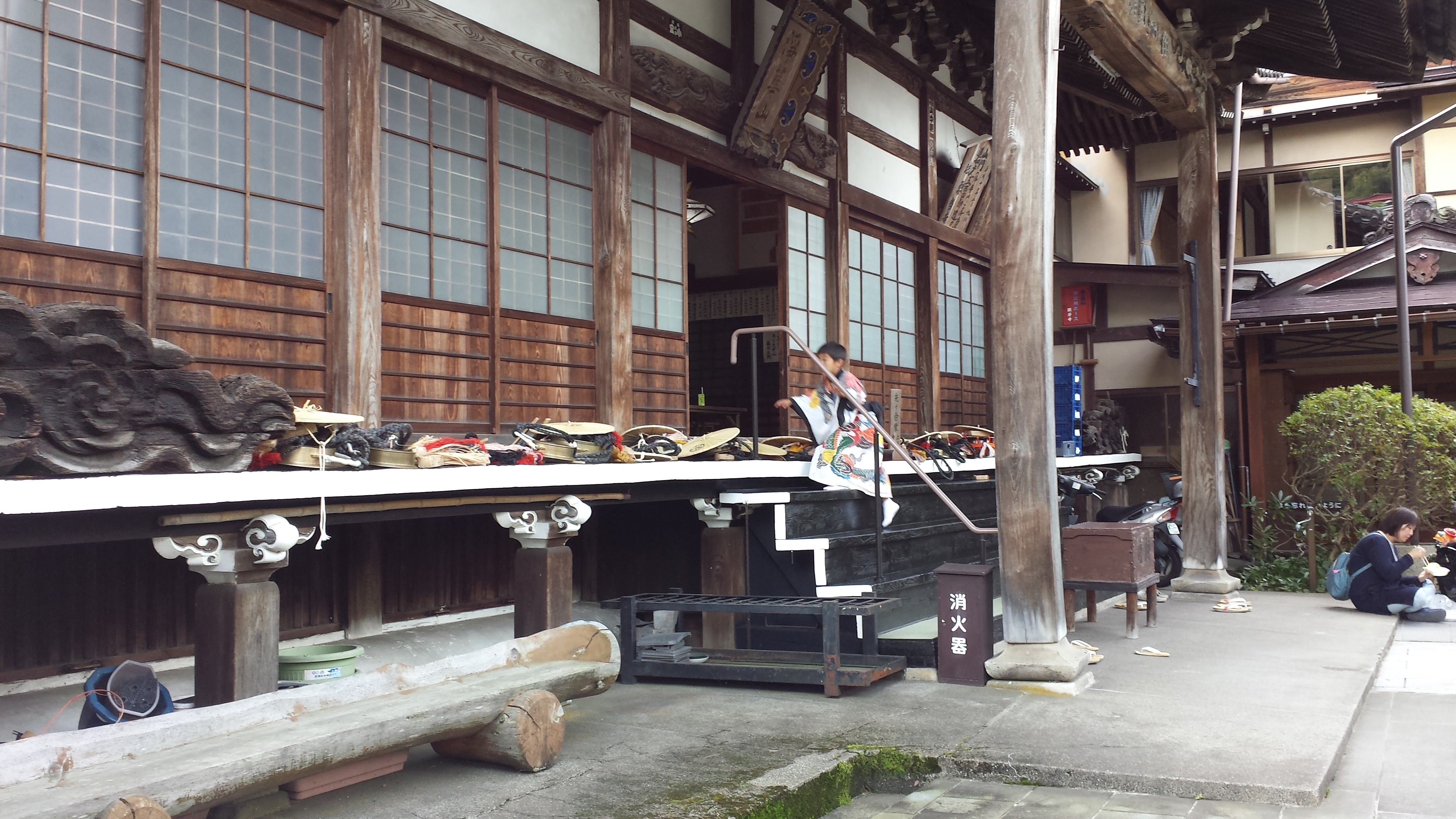 Moving on, we explored the grounds of Sakurayama Hachiman shrine and then proceeded along the main street, interacting with volunteer guides on an international sister-city exchange program, as well as: local craft vendors, youth performers in traditional costume, and even yatai handlers – paused from their work, happily smiling for photographs. We saw all eleven floats up close, with their unique karakuri dolls, and we even spied numerous incarnations of sarubobo – the red, faceless, humanoid dolls that are the mascot of Takayama – progenitors of good fortune and good marriage. The fall festival is a celebration of Sakurayama Hachiman Shrine, while the Ssring festival celebrates Hie Shrine, on the opposite side of the city. Sakurayama Hachimangu dates from the time of the Emperor Nintoku (413-439), when he summoned Prince Takefurukuma-no-mikoto to subjugate the monster Ryoumen Sukuna, an incredible beast with two heads, four arms, and four legs. Before undertaking on his task, Prince Takefurukuma-no-mikoto enshrined his father, the Emperor Ojin, as the deity of this sanctuary, and prayed for the success of his mission. 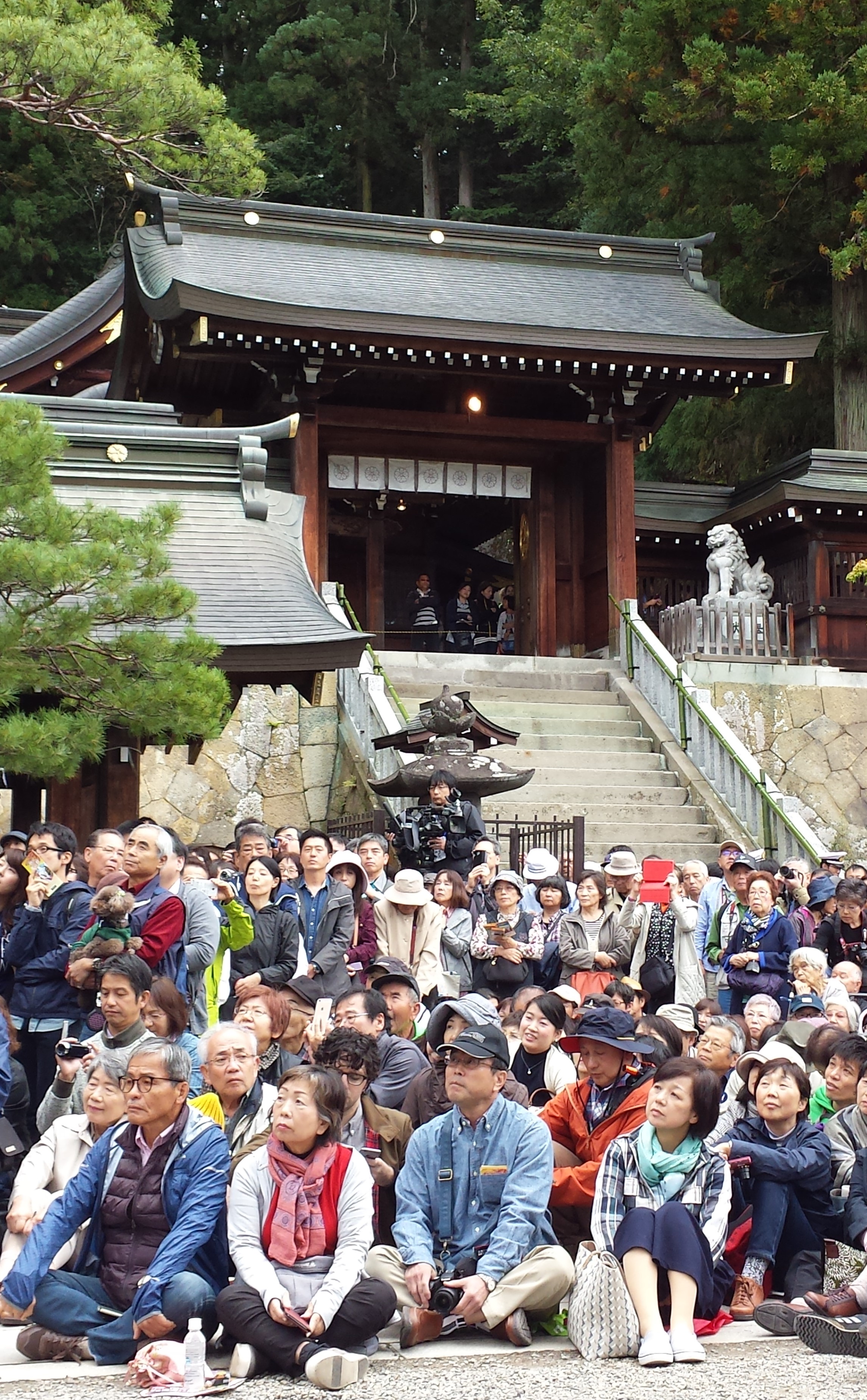 Today, more than 1,500,000 people visit Sakurayama Hachimangu annually – from around Japan and around the world -- especially during the festival!

Takayama City is part of the Shoryudo region of central Japan. For more information on this region visit Shoryudo.Go-CentralJapan.jp.