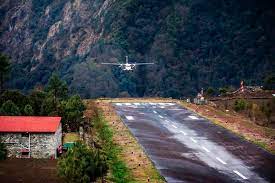 Lukla Airport for Everest base camp

Airport for Everest base camp Tenzing–Hillary Airport is also known as Lukla Airport. It is a domestic airport in the town of Lukla in Khumbu Pasang lhamu, Solukhumbu District, Province No. 1 of Nepal. It gained worldwide fame as it was rated the most dangerous airport in the world for more than 20 years by a program titled Most Extreme Airports. This program was broadcast on The History Channel in 2010.

The airport is popular because it is considered the starting point for treks towards Mount Everest Base Camp. There are daily flights between Lukla and Kathmandu during daylight hours in good weather. Although the flying distance is short, rain commonly occurs in Lukla while the sun is shining brightly in Kathmandu. High winds, cloud cover, and changing visibility often mean flights can be delayed or the airport closed. For security, the airport is surrounded by a chain-link fence and is patrolled round the clock by either the Nepalese armed police or civil police.

The airport for Everest base camp Lukla is located in northeast Nepal at 2,860m above sea level. You'd be lucky to see a goat or sheep despite the name these days. It means 'place with many goats and sheep. also, there are guides and porters waiting in the Lukla airport for the Everest base camp trek

The small town is buzzing with excited trekkers getting ready to set off on their expeditions or finishing off a well-earned beer after a good hike! Tenzing Norgay and Sir Edmund Hillary, the first people to reach the summit of Everest, were the namesakes of the Tenzing-Hillary airport.

Despite the picturesque views, there isn't much to do here in terms of activities, and the often changing weather conditions may make you wish you had stayed longer. Our goal is to give you some useful information about the airport, the weather, and what to do if you have some time before your flight.

Airport for Everest base camp

There have been news reports claiming that the Airport for Everest base camp Lukla airport is dangerous. Have you seen the reports that describe it as the most spectacular flight you've ever experienced? Although the negative headline is catchy, there isn't much truth to it. Every year, thousands of people fly in and out of Lukla incident-free, and it seems that Lukla has gained its reputation through its location rather than incident rates.

The runway itself is short with high terrain at the Northern end and a steep drop at the Southern end which doesn’t leave much room for error. Pilots who are allowed to fly out of Lukla airport must meet high standards set by Nepal's Civil Aviation Authority. They have to have completed at least 100 short take-offs and landings and have at least one year of experience doing this in Nepal as well as having to complete ten flights into Lukla with a certified instructor, so you're in safe hands!

If you travel with us, we have buffer days at the beginning and end of our trips. This is so if the weather isn’t optimal, Airport for Everest base camp we’ll wait for good flying conditions and spend an extra day in Kathmandu. As with all our trips, we do our research and safety is our number one concern, so we make sure we only use airlines with stellar safety records.

Also, the location of the airport wasn't the first choice of the developers. It was built in 1964 under the supervision of Sir Edmund Hillary. Originally, he wanted a flat piece of land nearby, but the farmers rejected his offer, so he had to look elsewhere. It's said that Sir Ed bought liquor for the Sherpas who were helping him build the runway and asked them to perform a 'foot-stomping dance in order to keep the land flat - fortunately, the runway is only a short distance!

Whether or not you enjoy flying in small aircraft to Airport for Everest base camp, it is the only direct way into Lukla since no roads have yet been completed (one from Kathmandu is being constructed). Bus, drive or fly to Phaplu or another nearby town and walk from there. It will take you 3-4 days. Then buckle up, get your camera ready, and enjoy one of the most scenic flights you'll ever experience.

Airport for Everest base camp Temperature

Lukla is located in the mountains, which are notoriously difficult to predict when it comes to the weather. If you are based in the US or UK, Nepal is in the Northern Hemisphere, so the seasons are pretty straightforward:

Summer (June - August, which also includes monsoon season from July - September): Temperatures are at their highest of 28°C (82°F), lots of rainfall, and unstable weather conditions in the Everest region due to melting snow.

Autumn (September to November): Low temperatures reach 26°C (70°F), comparable to spring. This is a great time to trek through the green hills after the monsoon season.

In winter (December - February), temperatures can reach up to 18°C (64°F), and trekking is not recommended as lodge owners pack up and head farther down the hills to find warmer weather.

The best times to visit Lukla and trek in the region if you want to stay cool and dry area in the spring and fall. During these months, the weather is at its best, with perfect hiking conditions and clear skies.