Samuel G. White is a designer of numerous homes and public buildings in the Beaux-Arts style and is the co-author with Elizabeth White of “McKim, Mead & White: The Masterworks,” a comprehensive survey of the firm's public buildings. Mr. White is the great-grandson of Stanford White (1853-1906), the foremost practitioner at the turn of the century, whose neo-classical designs were discussed along the tour.

Columns, pilasters and pediments categorize the architectural motifs of the Beaux-Arts period, a style prevalent in America from about the late 19th Century to the beginning of the 20th. During that time, McKim, Mead & White was a proponent of the style. The firm’s commitment to simplicity of form, which incorporated elegant details and arrangements of textures, made it the largest and most important architectural firm in America. The most prominent families in the Northeast commissioned buildings and homes, many of which remain standing to today.

During the tour of Woodlawn Cemetery the distinctive style of McKim, Mead & White’s constructions was apparent. Exquisitely carved garlands and scalloped seashells complete the top of the colonnaded mausoleum of Henry A. C. Taylor (right), while within, cherubs and fish-scale patterns (center) embellish the sarcophagi.
It was not unusual to see a Tiffany window shedding light and color inside crypts like the Louis Sherry mausoleum (below), or the familiar garlands adorning the top of the stark black granite 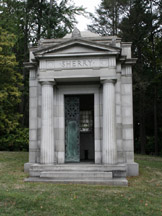 Some of the tombs were unknown to the firm’s archivist until Samuel White, with the aid of the Woodlawn staff and volunteers, began preparation for his book. The Woodlawn Cemetery is located at Webster Avenue and East 233 rd Street, New York, (718) 920-0500. Forthcoming tours in October include Italian Heritage at Woodlawn (10/17), Autumn in Woodlawn (10/24) and Halloween at Woodlawn (10/29, 10/30, 10/31). For a complete schedule, visit http://thewoodlawncemetery.org. For tour reservations contact Brian Sahd, Executive Director, Friends of The Woodlawn Cemetery, (718) 920-1470, friends@thewoodlawncemetery.org.
On October 18th from 6:00 p.m. to 8:00 p.m. The Friends of Woodlawn and Lehman College Art Gallery invite you to the opening reception of the exhibition Photographing Woodlawn. The exhibition will be presented at the Lehman College Art Gallery in the Robert Lehman Gallery, Bedford Park Blvd West and runs from September 21 through December 15, 2010.
All photos by Denise Mattia