It is not often that a toilet and a tea ceremony form perfect metaphors for the culture of a country, but so it is in Japan.

The toilet falls into the realm of delightful personal discoveries – albeit all of them in the hotel bathroom of the Kyoto Park Hotel. First, a warm toilet seat along with musical options with a variety of buttons that cleaned more areas with water spray than I have nether region body parts, a portion of the large bathroom mirror that remained perfectly clear even after an exceptionally steamy shower which co-incidentally was the most invigorating I've ever had. Plus a sophisticated hair dryer with more settings than I had hair styles. All a testament to Japanese ingenuity – they apparently don't only make better cars. However, as I was to discover on our hikes through the countryside, these benefits were not always available. In fact, toilets in general were not always available – or stall showers (but more on that later). 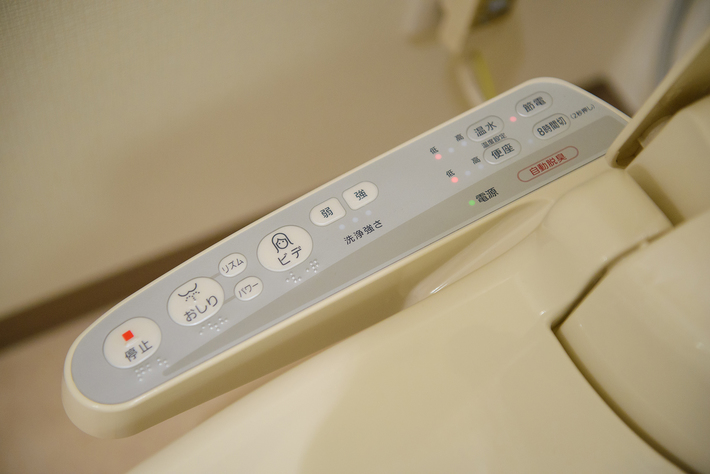 Japanese toilets are a study in Japanese innovation, Photo by Fyllis Hockman

A stop at a tea house illustrated another pervasive element of Japanese custom -- the precision with which they do everything. Just the preparation of a simple cup of tea can be a time-consuming, labor-intensive, rule-bound ritualized ceremony – the same is true of a cocktail at a bar. Whether you prefer your drink shaken or stirred – and if shaken, the procedure resembles a professional maracas concert -- an air of pomp and circumstance surrounds its presentation. You don't actually stop for a beverage of any sort on the way to the airport!

A visit to a Japanese tea master is a cultural experience of its own, Photo by Fyllis Hockman

From Kyoto and its temple overload, we headed into the countryside to follow the paths forged by feudal lords, daimyos and samurais of the 16-18th centuries. Traversing the Kiso Road section of the Nakasendo Way – the ancient highway that connected Kyoto with the then-town of Edo, now Tokyo – at a rate of 8-10 miles a day, we travelled past post towns that afforded pilgrims refreshment and accommodations, through mountain passes and alongside Shinto shrines and Buddhist temples.

The Golden Pavilion is one of many majestic temples and shrines in Kyoto, Japan, Photo by Fyllis Hockman

Every day was an adventure. Past so much greenery as to require a new color delineation to accommodate the different shades. Past sacred stone markings, old rice mills and monumental rock structures representing any variety of gods or demons or homages to emperors and other human or spiritual deities. And then the de riqueur waterfalls that crop up through the beautiful forests that provide a kind of tranquil experience equivalent to the many temples enroute.

Waterfalls are plentiful along the Nakasendo Way in Japan, Photo by Fyllis Hockman

As we hiked in and out of shrines, restaurants and tea houses, there's a lot of taking off of shoes and putting on of slippers – and then taking off those slippers and slipping into so to speak, other slippers. Whoever has the slipper concession in Japan provides added dimension to the concept of walking in someone else's shoes...

Shelves of shoes are rampant throughout Japan, Photo by Fyllis Hockman

The evenings we spent at small travelers’ inns, with fluffy futons floating on the floors serving as our beds. The inns might have been small and simple but the dinners there were not. They most often were banquet-style with multiple courses ranging from traditional (and to my palate, unidentifiable) to more recognizable offerings that usually took the shape of small fish. Despite not being an advocate of Japanese food in general, I still never left the table hungry.

Nightly banquets were a welcome respite after hiking along Japan’s Nakasendo Way, Photo by Fyllis Hockman

Having luxuriated in the bathrooms in Kyoto, such ablutions take on a slightly different tenor in the countryside. I don't usually shower and wash my hair before getting into a bath, but at the traveler's inn in the rural town of O'Tsumago, I found this was the custom. And as I’d learned, customs are one of the primary characteristics of Japanese society. Okay, so maybe shower is somewhat of a misnomer – really, you're sitting on a low stool next to a series of other low stools and rinsing yourself off with a shower head. And maybe bath is misleading as well. It was actually an assortment of hot pools in a tranquil outdoor setting accessed by multi-levels of stones and surrounded by interspersed boulders ranging in size from large to humongous. And although to me this seemed like a very unusual experience, our guide assured me it was an everyday occurrence. In other words, bathing had become a communal rather than an individual occurrence.

That sense of community carries over to meals to which the inn occupants tend to wear their yukatas, dressing robes provided by the inns, while sitting cross-legged on tatami mats. No dressing for dinner. Saves a lot of space when packing…

Day two took us through more post towns that feel and look as old as they did in the 17th and 18thcenturies. I sensed the samurais traversing the same stone steps, stopping for tea at the same wooden tea houses, sitting on the same tatami mats. At the Waki-Honjin in Tsumago, where feudal lords used to stay, allegedly the infamous Emperor who moved the capital from Kyoto to Tokyo in 1868 stopped by once. They're still celebrating that half-hour rest stop by showcasing special seats and implements he may or may not have used. It reminded me of the George Washington Slept Here claims often heard in the U.S.

Our daily meanderings continued, sometimes over trails or through towns and often shrouded by forests, thick and lush, with ever-present rumblings of brooks and rivers and waterfalls accompanying our journey. It was a measured pace with lots of stops for historic perspective and although the uphill climbs often required a wish for even more historical perspective, it sounds harder than it was. Oh alright, so there were one or two sharp inclines but you tend to forget about them shortly thereafter. Sort of like childbirth...

Day three – more ups and downs, more historical towns, more stunning views, more shrines and temples. As much as my eyes tended to glaze over after too many temples, shrines and castles, each is actually so well done that despite myself I found I was both interested in and understanding the many details of the lives of the various emperors, shoguns, samurais, daimyos and oh yes, also the concubines who dominated the history of Japan from the 9th century through the 20th. And I was actually beginning to look forward to yet another pair of slippers…

And all the while, continued inter-connectivity with the other men and women on the tour, conversing with different people at different times, the comraderie certainly welcome as you cross another mountain pass for yet another scenic overlook.

There is no tipping in Japan. I mean you can't tip even if you want to. Service people just won't accept it. At one point, we stopped for tea and our guide Kate had collected more money from the group than was needed. The waitress practically chased us down the street to return the equivalent of a $1.50 overpayment. Can you imagine THAT happening in the U.S.?

Time to return to the big city. There’s definite culture shock going from the tranquility of the countryside to the sensory overload of Tokyo, the city center doing a very convincing impression of New York's Times Square.

Despite Tokyo's hi-rise modernity, the Edo Period (1602-1868) is still alive and well just below the surface. And this is what our guide Paul delights in explaining. Using a collection of wood cuts and old photographs dating from the 1800's that he's amassed in a mammoth book, he illustrates how every street corner, bridge, hidden side streets and major boulevards all had their beginning from the time Tokugawa arrived in 1590. Assuming the title of shogun, he unified the country by manipulating the daimyo (the baron class) and the samurais (the warrior class) so that they stopped fighting each other (for the most part) and worked together to make Edo (later renamed Tokyo) the center of Japanese life and culture.

The rich history is not present in the buildings but in the layout of the city, the nooks and crannies underneath. He related his pictures directly to what we were looking at so that we no longer saw what was currently there but what used to be. He brought to life all the far-reaching accomplishments of the Tokugawa family shogunate, the daimyos and samurais who served them, the merchants and the horse traders who lived there. “See this,” he pointed to a historical illustration time and time again. “This is where we are now!”

Tokyo Park was a part of the old Eco Period as well as modern Tokyo, Photo by Fyllis Hockman

When I was finally able to pull myself away from the enthrall of the Edo Period, I looked up and was surprised to find a very modern Tokyo all around me. The intriguing and creative architecture of so many striking skyscrapers was in sharp contrast to the wooden dwellings of the daimyos.

Although the two major cities, Tokyo and Kyoto, add breadth and scope to the experience, it is the richness of texture and depth of culture of the Nakasendo Way that makes the journey so meaningful.

As I was going through security at Narita Airport enroute home, somehow having to remove my shoes did not feel as oppressive an activity as it usually does. I felt right at home – until I asked a surprised TSA agent for a pair of slippers. For more information, contact walkjapan.com.