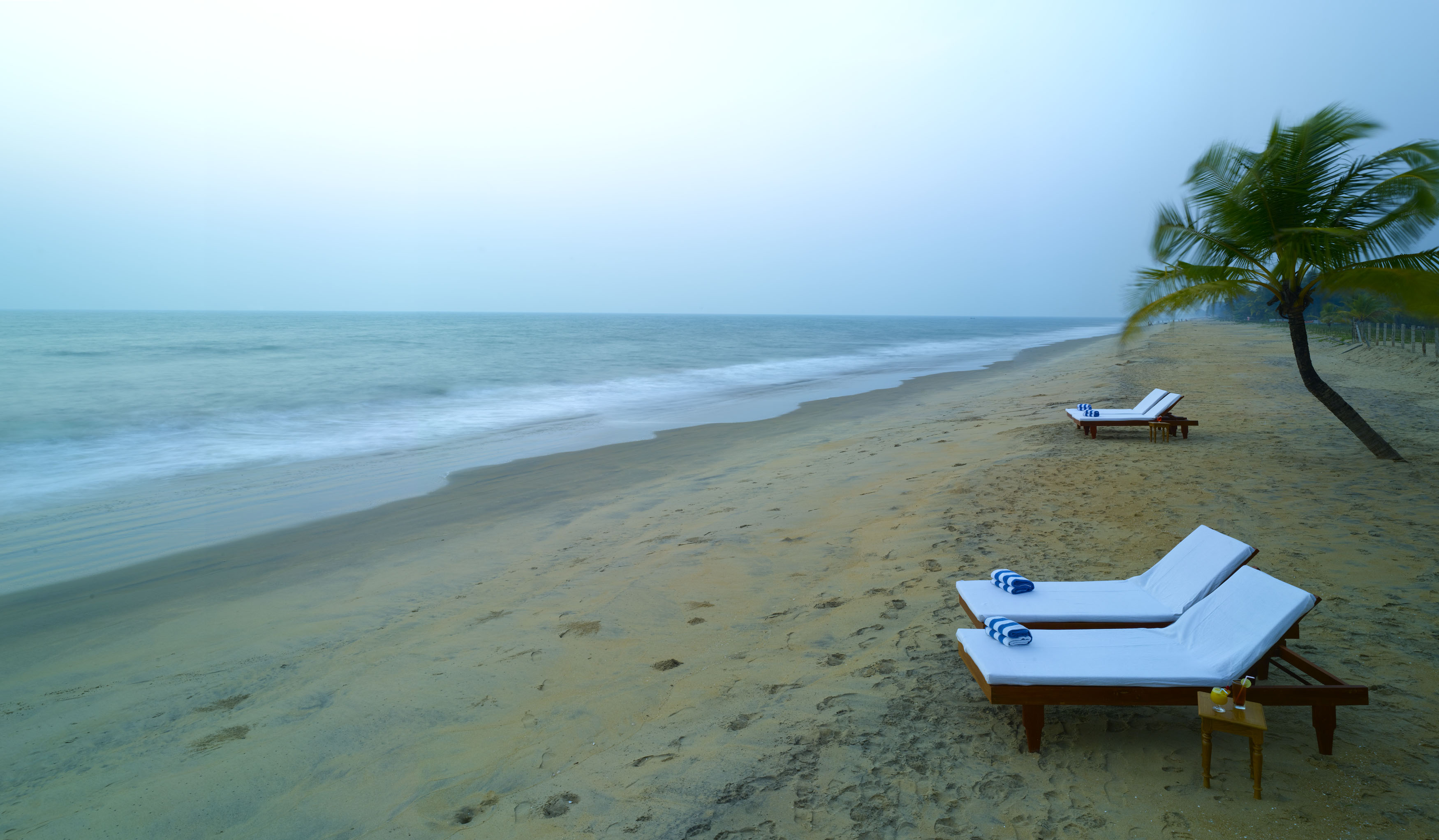 Varkala is a calm and quiet hamlet, seaside tourist resort and spa. It is a small coastal town located 51 kilometers (approx. 32 miles) northwest of Thiruvananthapuram (Trivandrum) and 37 km southwest of Kollam in Kerala that is also an important religious place for the Hindus. Varkala beach is a serene quiet sea resort that is rich in mineral water springs. It is the only place in southern Kerala where cliffs are found adjacent to the Arabian Sea. These tertiary sedimentary formation cliffs are a unique geological feature on the otherwise flat Kerala coast, and is known among geologists as Varkala formation and a geological monument as declared by the Geological Survey of India. There are many waterspouts and spas on the sides of these cliffs. Although Varkala is a famous Hindu pilgrimage center, it has been recently opened for tourism and therefore the town is yet to be explored. If you are looking for a less crowded beach in India then a trip to Varkala in Kerala is the best choice. Varkala is a perfect beach holiday destination with lesser crowds. You can visit the town any time, as the climate remains pleasant throughout the year. However, if you want to stay away from the crowds then avoid going there during the pilgrimage time, which lasts from December 31st to early January. It has emerged as a tourist hot spot destination in Kerala in recent years. You may spend time at this spot leisurely on the quiet beaches doing absolutely nothing while holidaying. The pristine glory of the beaches of Varkala remain so untouched that one literally has to climb down the cliff or scramble over rocks in order to reach the secluded parts of the beach.

The quiet and secluded Varkala Beach is a haven for sunbathing and swimming. The evening views of the sunset are worth witnessing. It has several places of tourist interests like a beautiful beach, a 2000-year-old Vishnu Temple and the ashramam - Sivagiri Mutt a little distance from the beach. The hilltop mausoleum of Sree Narayana Guru is one of the most famous monuments in Kerala. It is the major landmark in Varkala established by the social reformer Sree Narayana Guru. The adjacent hills house the East-West University of Brahmavidya and Sree Narayana Gurukulam.

According to a myth, sage Narada was approached by a group of mendicants who confessed to having sinned. Narada threw his valkkalam (the bark of tree which the mythical sages used to wear) into the air, and the place where it landed was subsequently named Varkala. The mendicants were directed by Narada to offer their prayers in the newly created place by the seashore. The place where they prayed for redemption came to be known as the Papanasham Beach ('Papanasham' means redemption from sins).

Varkala Beach: This beautiful beach consists smooth white expanses of sand, sun and sparkling blue water. It is located on the high ranges of the Western Ghats, is one of the primarily important Hindu pilgrimage centers. The town is also known because of the Papasnanam Beach.  At a distance of 54 km from Thiruvananthapuram, lies Varkala Beach. A quiet and solitary sandy expanse, the isolation draws several tourists all through the year.  The beach has several tourist spots around which help pique the interest of the travelers.

Sree Janardhana Swamy Temple: This is a 2000 years old temple that stands on the cliffs overlooking the beach, a short distance away. It is a pilgrim center for Hindus. The Sree Janardhana Swamy Temple is dedicated to Ayyappa that is a major crowd-puller, with thousands of pilgrims visiting each year. This temple is built on a hilltop that has become a sobriquet for the region. It is a very important Vaishnaviite shrine that attracts thousands of pilgrims. Facing the temple is the Papasnanam beach where devotees take a bath in the belief that the sacred waters will wash away their sins. The temple has an ancient bell removed from a shipwreck, donated by the captain of the Dutch vessel, which sank near Varkala without causing any casualty. One of the inscriptions indicates that the temple was improved during the reign of Umayamma Rani, who ruled this region during 1677-84 A.D. Non-Hindus, however, are not permitted entrance in the inner sanctum but can hang around in the temple.

Arattu festival at this temple is celebrated every year in Meenam (March-April) commencing with Kodiyettam (Flag hoisting) of Krithika day ending with Arattu on Uthram day. A colorful procession led by adorned elephants is one of the prominent features of the festival.

Sivagiri Mutt: It is founded by the great Hindu reformer and Philosopher Sree Narayana Guru (1856 - 1928), whose mausoleum is also located on the hilltop. The Samadhi (the final resting place) of the Guru attracts thousands of devotees every year during the Sivagiri Pilgrimage days - 30th December to 1st January. The Guru propagated the ideology: "one caste, one religion and one god", in a society torn by the taboos of caste system.  Other spiritual centers in the adjacent hills are the East-West University of Brahmavidya and Sree Narayana Gurukulam, both founded by Nataraja Guru, a disciple of Sree Narayana Guru.

Kaduvayil Thangal Dargah: It is another pilgrimage that houses the shrine of a famous local Muslim saint. It is on National Highway 47 and attracts people from all religions, who seek the saint's blessings.

Papanasam Beach: It is a quiet stretch of white sandy beach, surrounded by coconut palm trees and red cliffs of 1500 meters. This Internationally renowned Beach Resort has been a favorite haunt of tourists since the 1930s. Kovalam consists of three adjacent crescent beaches. The Southernmost, known as the Lighthouse beach, is the most popular Kovalam offers accommodation options to suit all budgets.

Anjengo Fort: It was the stronghold bastion of the British in the coastal belt of Kerala that was built in the 17th century, the remnants of the old English fort and its cemetery are now protected national heritage monuments. The earliest sepulcher in the cemetery dates back to 1704 AD. Anjengo literally stands for 'Anju Thengu', which means five coconut trees. It was established in 1684 by the English East India Company as a strategic garrison, the fort protected their powerful position in Kerala and played an important part in the British military strategy, during the 17th and 18th Centuries. The British also used it as a trading station. At present it only has a few remnants of the fort and cemetery.

Varkala Tunnel: The Varkala Tunnel, a 924 ft long tunnel, was built more than a century ago to aid the seafaring trade between Thiruvananthapuram and Kollam. The tunnel built in engineering perfection provides ample natural light and air circulation. Its construction began in 1867 and completed 1880. It is popularly known as 'Varkala Turuthu', this tunnel was built under the supervision of Divan Sheshaya Sasthri and was extensively used for ferrying of goods.

Kappil Lake: It is located 6 km north of Varkala at the outskirts of Varkala town, the lake gives way to the pictorial world of the Kerala backwaters. It is a less-explored, quiet and scenic spot, ideal for a relaxing cruise enjoying the captivating beauty of the landscape. The surrounding area is draped in lush greenery including numerous coconut grooves. The scenic beauty of the estuaries of the lake is mesmerizing.

OTHER ACTIVITIES AT VARKALA

Sunbath: One of the best ways to spend time in the beach and to get a tan.

Water Sports: Opportunities galore to indulge in a variety of water sports. Enjoy a number of thrilling activities including a ride on the speedboat or a water scooter.

Sunset: Watch one of the most memorable sunsets at the Varkala beach. Feast your eyes as the magic unfolds as the water, palm trees and the cliffs gets drenched in a beautiful crimson hue with the sun going down the horizon.

Ayurveda: It is an important activity in Varkala. There are several clinics offering massages and treatments but many of them opens only during the peak season. You could also enroll for meditation classes at the Sivagiri Mutt.

Backwater Cruises: It is an activity that is picking up in the stretch between Edava and Kappil (6km north of Varkala). The scenery of this beautiful estuarine area is captivating.

Nature Cure Center: Situated near the Varkala beach, this is an excellent destination for relaxation and rejuvenation of the body.

Varkala although a small town is well connected with road and train services with the major cities in India. The nearest international airport is at Thiruvanthapuram. Once inside the town it is easy to get around on foot as the town is spread on just few kilometers. Auto-rickshaws are also available for commuting.

By Rail: Alleppy & Quilon is the nearest rail route to Varkala about 3 km away.

By Road: Varkala is 54 kms from Thiruvananthapuram and 37 km from Kollam.