Except for the tinkle of harness bells and the occasional grunt of yaks, the valley is silent. Early morning mists shrouds the lone hut in Merathang, a pasture bordering Merak and Sakten villages, in the extreme north of Trashigang, Bhutan.

Inside, 38- year old Sumba is woken by the sound of droplets of rain dripping 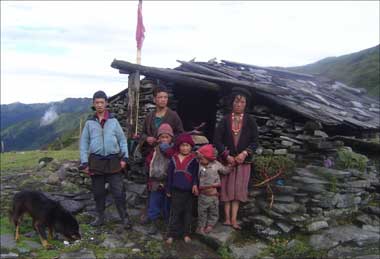 through a hole in the roof and splattering in to an aluminium pot on the floor. Assuming its dawn, he gently sneaks out of the woolen blanket shared by his wife and three children. He wakes his brother- in –law, sleeping at the other end of the one roomed hut, and together they set off to work. They return after an hour, carrying buckets of milk to the hut where the family is seated around a stone hearth at the centre of the room. Together, they churn the milk to make butter and cheese, which is followed by a meal consisting of maize flour and a hot vegetable soup. While Sumba’s wife clears the dishes, he and his brother-in-law set off for the pasture to graze the yaks.

Sumba and his families are Brogpas, the nomadic community of Eastern Bhutan, and their life is that of a naazip or Herdsman. They always move to the summer pastureland in Merathang every July with their 35 Yaks, two sheep and a horse. “My life revolves around the yaks and pasturelands. I was born as a naazip and will die as one” said Sumba.

Hundreds of other naazips like Sumba leaves their homes in Merak and Sakten and move to alpine pastures at a height of more than 3000 meters. They live a life that is
in harmony with nature, moving seamlessly like the wind from one pasture to
another with the changing seasons. But behind this romanticized veil is a life
that is tough, challenging and altogether very different. That is what Kuensel (Bhutan National News) found
out after living and travelling with them for a week.

Naazips have a permanent home at Merak and Sakten but they get to stay for only two months in a year. For the other 10 months, they stay in temporary sheds built by their
ancestors years ago, as they migrate from one place to another.
These single-roomed huts of stone walls and wooden planks do little to keep out the cold and rain and function as kitchen, bedroom, workplace and
storeroom. A few live in huts that are
no less marshy than outside. The closest neighbor is a two hour walk away.
Sometimes, it was just one person who left as naazip but in most cases, the
entire family moved with the herd. Some also served as naazips to rich
landlords in their village or owner in the east, surviving on incentives
provided by the owner.
Despite the difficulties, the naazips strongly feel that their children make a
living through yaks. Very few have enrolled their children to school.
Genden Tsomo, 37, and her husband had moved with the herd to Thank Karpo, a two
day walk from Sakten, leaving behind her fourteen year old son, who was
studying in Grade 4 in Sakten. She had brought her 11 year old son and 8 year
old daughter with her. “If our children do not perform well in school, they can
fall back on their Yaks. But we need a helping hand and two of my children will
become naazips when they grow up. Otherwise how will we survive until the eldest
gets a Job?” said Genden.

On the migration cycle, naazips survive on the stock of wheat and barley taken from their home. Many frequently cross over to the neighboring Indian state of Arunachal Pradesh or lower villages of Trashigang, Bhutan to sell their daily
products like cheese and butter.
Naazip Pasang said that 90 percent of their products went to Tawang and Shar
Dirang in Arunachal Pradesh. “We have been trading with people in that region
for ages and are more familiar with them,” he said, adding that their products
were sold in mass there. They also bartered it for food grain and salt. He said
that the lack of a road discouraged them to take goods to their own country in
Trashigang. Moreover they rear their own cattle and very little of their
products is sold.
As their lifestyle encouraged isolation and poor sanitation conditions, many do
not receive proper health care. “The nearest health unit is a two day walk from
Merak but we cannot afford to leave the Yaks alone.” Said Genden, who was
suffering from Urinary tract infection at the time of the interview. However she
said, she had no complaints as she was used to such hardship. “Other sees it as
a difficulty but we do not perceive it that way. It’s a part of our living,”
she said.
The establishment of the Sakten Wildlife Sanctuary in 2003 made life even more
difficult for them. Naazips say many restrictions were imposed upon them and
they were deprived of forest resources after the Sanctuary came up. Tshering,
48, from Merak said they were many do’s and don’ts they were made to follow
which demanded many adjustments. “The change in the system is threatening our livelihood.
Government has plans to come up with many rules and we are worried about our
right over pastureland,” he said.
According to Park officials, countless naazips practiced girdling (making rings
around tree by removing bark), to let it die so that they could create space
for grazing. Park Range officer in Merak, Dhono, said looping (chopping of
branches and leaves), which served as fodder for cattle, was also very
prevalent. “All these have caused major damage to the the environment in the
region,” he said.
With the Scattered settlement pattern of naazips, he said it was difficult to
reach everybody to monitor and create awareness. He said that the rate of
animal poaching was also very high. However, normal"">endangered species like Leopard, Himalayan black bear, various
peasants, and red panda were reviving.
Dhono said under the Integrated Conservation Development Programme (ICDP)
introduced by the park, more than 240 households in normal"">Sakten were provided with CGI sheets to reduce pressure on the
forest. Plans are underway to conducts to conducts similar activities in Merak. There are also plans to build a
prototype shed that naazips could replicate and use during the migration cycle
to improve sanitation, hygiene and living standards.

Meanwhile, shadows of the ridges fall over the hut as the sun sinks behind it. Sumba and his brother-in-law are heard returning with the normal"">Yaks, singing a brokpa song in their shrill voice: “May everyday is like this and may all the
Yaks be reborn in my house.”