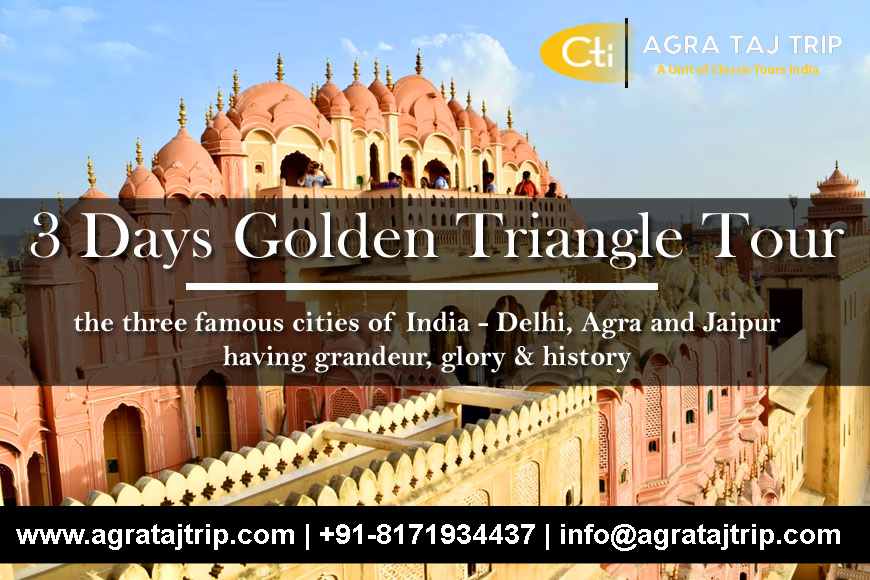 The three most well-known cities in India are Delhi, Agra, and Jaipur, which are all included on the 3-Days Golden Triangle Tour. Visitors see a true representation of India's rich customs and culture. This wonderful journey brings you to the vibrant and political heritage of Delhi, the historical capital of the Mughal emperors in Agra, and the Rajput city of Jaipur.

Enjoy your 3 days in the Golden Triangle with us. The capital of India, Delhi, offers a wide variety of attractions, restaurants, and bustling malls. The Mughal Empire's former period, its architectural brilliance, and the amazing monuments built during that time are revealed at Agra, the capital city. The pink city of Jaipur is well-known for its palaces, temples, and forts all over the world. On this Delhi, modern towns with a touch of the glorious past Agra-Jaipur Trip the 2 nights and 3 days highlight India's many civilizations. Explore the fascinating adventures of Delhi, Agra, and Jaipur by booking your vacation right away.

You will be greeted at the airport in Delhi by one of our agents to begin your three-day Golden Triangle Tour. The vibrant capital of India will be your destination for a sightseeing trip. Delhi is a great fusion of old and new, with well-known landmarks and shopping centers scattered across the city. You may take a tour of Delhi's Old City and visit Chandni Chowk, one of the city's oldest markets, as well as Jama Masjid, the largest mosque in the nation and one of the city's most prominent landmarks. You could afterwards pay a visit to India Gate, a famous military memorial honoring valiant Indian warriors. Even the President and Parliament's mansions may be passed by a car. You will also be transported to QutubMinar, Raj Ghat, and Humayun's Tomb. Take the 210-kilometer Express Highway, which takes around 3 hours to travel, to get to Agra. Have supper at a well-known Agra restaurant when you arrive. We'll stay the night at an Agra hotel.

Early in the morning, as the sun is rising, visit the Taj Mahal. The Taj Mahal will subsequently be seen once again in the daylight. Sunlight makes the Taj Mahal appear wonderful, which is a testament to Shah Jahan and Mumtaz's sincere love for one another. After seeing the Taj Mahal, have breakfast at the hotel before leaving. You will be escorted to the Agra Fort, a well-known tourist destination made of red sandstone and representing bravery and strength. Then continue on to Jaipur. You may make a pit stop at Fatehpur Sikri, the historic capital of Akbar the Great, on the route. Due to the lack of water, many people rapidly departed. Continue on to Jaipur and stay the night.

After an early breakfast at your Jaipur hotel, depart for sightseeing. Start your adventure at the Aravalli Hills' Amer Fort, which is positioned on top of the hill. Enjoy the once-in-a-lifetime opportunity of the elephant ride to the fort. A short distance away lies the City Palace, an incredible example of Mughal and Rajput architecture combined. After that, head directly to Jantar Mantar, Hawa Mahal, and Jal Mahal, three of Jaipur's most famous landmarks. In one of Jaipur's most well-known eateries, scrumptious Mughlai cuisine is offered for a magnificent lunch. After returning to Delhi in the evening, you will be dropped off at your location with wonderful memories of your two-night and three-day Golden Triangle tour 3 days.