Inexpensive and friendly, Thailand boasts fascinating cities and towns, abundant nature, islands with exotic beaches, and adventure on land and sea. Check out these eleven Thai musts for a full menu of all of the above, with something for almost every taste:

Of course we start with Thailand's capital (top). With a population of more than 10 million, Bangkok is a study in contrasts: modern/international and traditional side by side as well as fast moving with pockets of tranquility. Superb dining and shopping are everywhere, along with rollicking nightlife. Top attractions include the 18th-century royal Grand Palace; Buddhist temples including Wat Phra Kaew (on the Grand Palace grounds), Wat Arun, and Wat Pho; Khaosan Road for shopping and nightlife; and the Chatuchak Weekend Market (one of the world's largest). 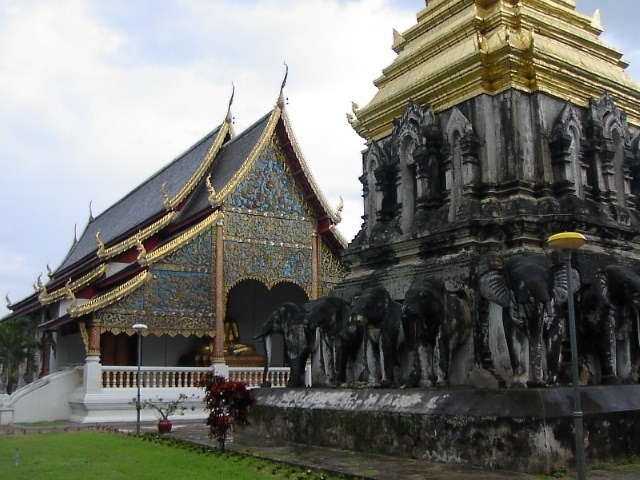 Founded at the end of the 13th century, this large city set among the lush rainforests of Thailand's northern mountains is considered one of the country's cultural hubs, and its pace is slower than that of Bangkok. Chang Mai offers quite a few historic sites (including more than 30 Buddhist temples such as 13th-century Wat Chiang Man, the oldest, above, and Wat Pra Singh) in its walled, moat-encircled historic quarter; a lively dining and nightlife scene; colorful open-air markets (especially don't miss the Chang Mai Night Bazaar; and excursions to experience elephant sanctuaries, hill tribes, and adventures such as caving and ziplining outside the city proper. 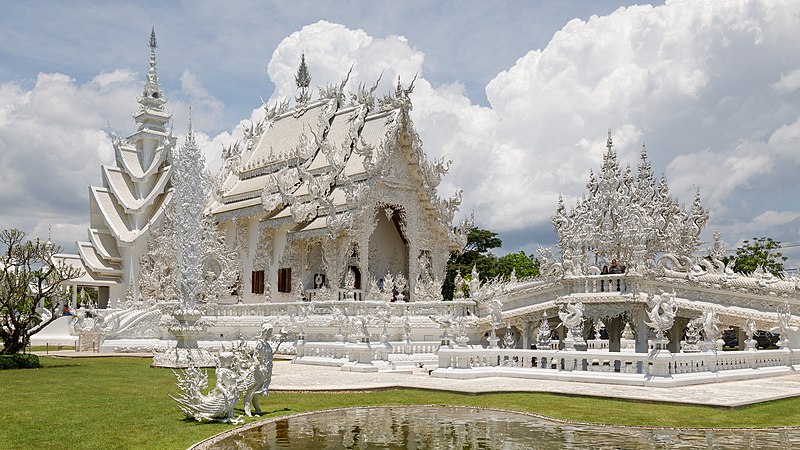 A three-hour drive from Chiang Mai, and sleepier and more laid back (including its nightlife), Thailand's northernmost major city was also founded in the 13th century and has an impressive collection of temples and other historic structures to prove it. Highlights include temples such as 14th-century Wat Klang Wieng and Wat Phra Singh, 10th-century Wat Phra That Doi Chom, Wat Phra Kaew (as well as the now famous 24-year-old monument known as the White Temple, above); the Night Bazaar, Mae Fah Luang Art & Cultural Park, the Baan Dam Museum, and the Oub Kham Museum. Also fascinating is trekking in the surrounding hills and visiting the Lanna and Tai hill tribes. 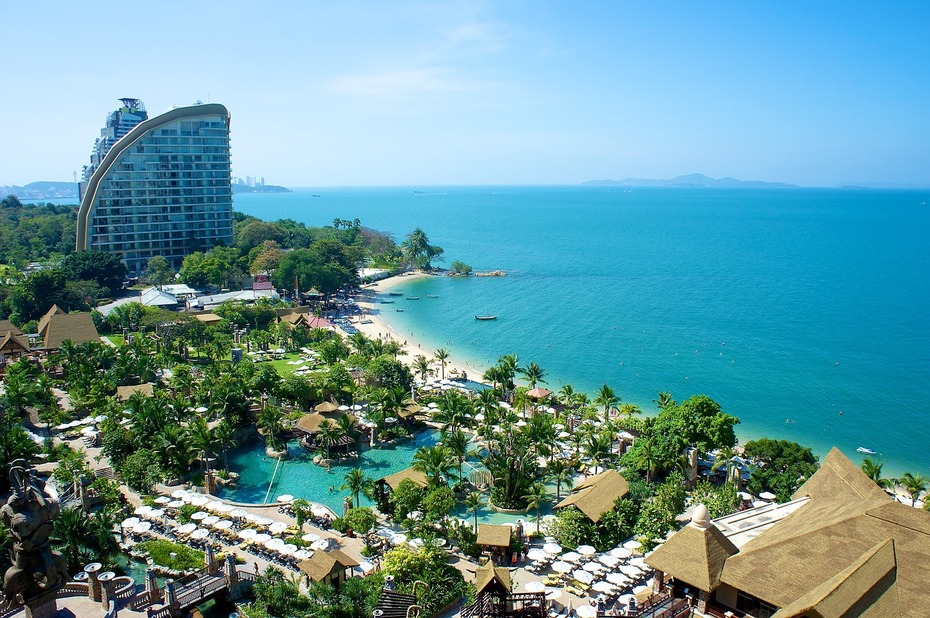 On the Gulf of Thailand coast southeast of Bangkok, Pattaya has become a booming resort city known for its nightlife and beaches such as Jomtien and Pattaya Beach. There are also a number of other attractions such as the amazing teak Sanctuary of Truth, a recently constructed hybrid of temple and palace; the Nong Nooch Tropical Garden; a floating market; the Wat Phrao Kao Yai temple complex; Mini Siam theme park; and several nearby water parks. Set amid scenic limestone karst landscape down on Thailand's west coast, onthe Andaman Sea, this town has become a popular tourist destination for beaches such as Railay and Phra Nang, with a range of water sports, as well as ecotourism and adventure in nearby national parks Hat Noppharat Thara and Ko Lanta.  Other local attractions to include temples such as hill complex Wat Tham Seua and Wat Kaew Korawaram, and offshore islands including Ko Poda and Ko Tap (aka Tup Island). On Thailand's western, Andaman Sea coast and part of a national park, this is a popular draw for its dramatic limestone cliffs, caves, and islands. You can sign on to a boat excursion or rent a kayak to explore the bay and some of its 42 islands, including Ko Phing Kan (aka James Bond Island because it was used in The Man with the Golden Gun and Tomorrow Never Dies), Ko Hong, and Ko Panyi. (The bay also appears in Star Wars: Episode III - Revenge of the Sith). 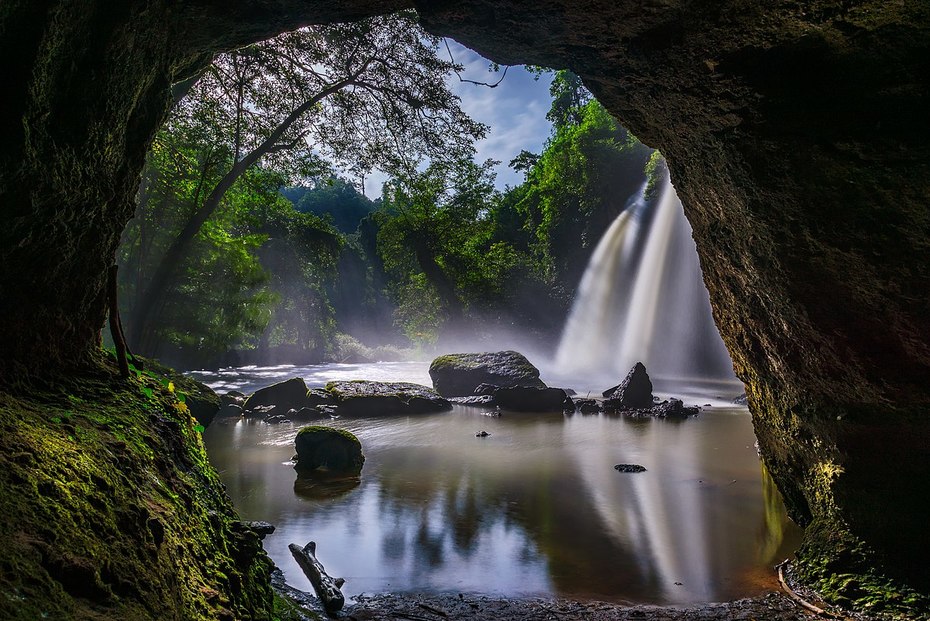 Just under five hours northeast of Bangkok, this 837-square-mile (2,168-sq.-kilometer) spread is one of Thailand's top ecotourism draws, with extensive hiking trails and wildlife such as gibbons, macaques, sambar deer, bears, jackals, and elephants (one of the few areas left in Thailand where they survive in the wild). Highlights include waterfalls Haew Narok, Haew Su Wat, Nang Rong, Pha Kluai Mai, and Wang Ta Krai. Now we come to Thailand's most popular island destinations, and scenic Phuket is the largest and most popular of all, located on the Andaman Sea and across Phang Nga Bay from Krabi (it's an hour by plane from Bangkok). Attractions include its main town (and lodging, dining, shopping, and nightlife hub) Patong; Karon and Nai Harn beaches; the 148-foot (45-meter), concrete Big Buddha statue completed several years ago; the Phuket FantaSea cultural theme park; Buddhist temples like Wat Chalong and Wat Chai Thararam; and an elephant sanctuary. In Patong for nightlife go to Thanon Bangla street and for shopping/photos ops don't miss OTOP Patong open air market and Baznaan Fresh Market. East of Phuket out in the Strait of Malacca and reachable by boat from Krabi, this small grouping of islands is known especially for the exotic beauty of its limestone cliffs. Boating, beaching, and snorkeling are the main activities for visitors here, and highlights include Ko Phi Phi Don (the largest island), Ko Phi Phi Le (known for its beaches), Maya Bay, Bamboo Island, Ko Mai Phai, and Ko Bida Nok. 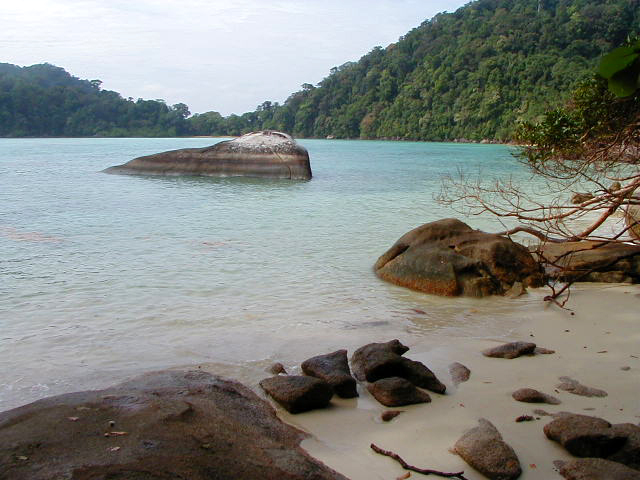 Visitors come to this picturesque, rainforested archipelago of five islands in the Andaman Sea not far from Phuket - reckoned by some to be Thailand's most beautiful, and all part of the Mu Ko Surin National Park - for aquatic activities like beaching, snorkeling, and scuba diving (its coral-reef life is superb, and its Richelieu Rock is considered one of the world's top ten dive spots). Must-visits include Mai Ngam Beach and Chong Khat Bay. The Surins are also home to communities of animist Austronesians called the Moken. There are several lodges and bungalows here, but many visitors camp out on the pristine beaches with their impressive dea cliffs..

For some great Thailand package options, check out TravelTriangle.com.