Finally there’s a Spanish wine that suits most palates.  Branded Tapeña, it’s a clever combination of the Spanish word Tapas (TAH-paz), foods to share, and peña, a slang word for a group of close friends.

The grape comes from the Tierra de Castilla region in the heart of Spain, an area that’s highly regulated by the Denominación de Origen (DO) appellation system.  Offering two reds, Tempranillo and Garnacha, a white, Verdejo and a Rosé, Tapeña wines are now available in the states and are priced under $10 a bottle. 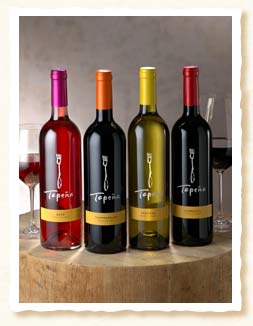 If you’re looking for a light and fruity wine, like a pinot noir, try the Tempranillo.  Similar to a Merlot is Garnacha.  It’s a medium bodied red with a rich berry flavor.  The grape ripens late in the season and consequently thrives in the hot, dry conditions that the Tierra de Castilla region affords.  It’s known to produce excellent wines in the southern European countries such as Italy, Israel, Cyprus, the Greek Islands and in northern Africa (Algeria and Morocco) as well.  In the white category, Tapeña Verdejo offers an aromatic and full-bodied wine.  Dry, crisp, and with a hint of citrus and lemon, Verdejo is thought to be brought to Spain by the Moors.  It’s similar in taste to a Pinot Grigo.   Becoming increasing popular in the states, is the Tapeña Rosé.  It has a slightly sweet flavor and an aroma of fruit and spices.  It’s the perfect any-time wine to be enjoyed in the company of friends.