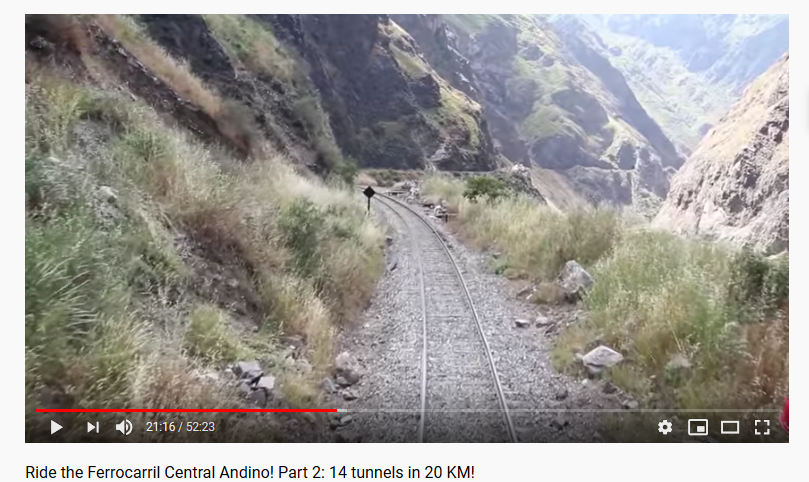 You’re enjoying an adventure for the senses as you journey through the soaring Alps Mountains in Switzerland.  You immediately understand why the magnificent view that surrounds you in Colorado inspired the words of “America the Beautiful.”   You channel Harry Potter during a ride over the towering viaduct that the Hogwarts Express crossed in the popular film series.

These and other equally dramatic, experiences can be yours while you travel no farther than the chair in front of your computer.   With people now spending more time than usual at home, railroad buffs, lovers of the outdoors and anyone else seeking a close-up encounter with Mother Nature may take a virtual train ride in destinations around the world.

Several websites offer simulated YouTube experiences that place viewers on excursions certain to entertain the eye and satisfy the longing to escape the daily grind, even if only for a brief time.  Some offer observers an engineer’s view of the passing scenery; all provide a realistic, if admittedly imagined, ride on the rails.

If you have enjoyed an outing by rail in the past, you may relive the experience and rekindle memories.  If not, you’ll have an opportunity to check out train trips you may wish to add to your bucket list for future planning.

A day-long ride on the Glacier Express to enjoy the snowy wonderland of Switzerland finds a place on many a person’s wish list.  Just when you think you’ve seen the most spectacular landscape possible, another one which surpasses it in beauty comes into view.

The setting is very different, but by no means less awe-inspiring, on the cog railway that climbs to the 14,115-foot summit of Pikes Peak in Colorado.  Since 1891, what’s said to be the highest cog railroad in the world has carried millions of passengers through and above lush forests of aspen and pine trees and past streams cascading down  steep hillsides.   Those who make the journey share the spectacle that prompted a youthful English teacher in 1893, upon reaching the pinnacle, to write about “purple mountain majesties.”

The Jacobite Steam Train would be popular even without its Harry Potter connection.  Its route passes through the Scottish Highlands, traverses the country’s highest mountains and skirts deep freshwater and seawater lochs.  Adding to its appeal is the fact that some of the train’s carriages were used in the Harry Potter films, and it crosses the Glenfinnan Viaduct, over which the Hogwarts Express chugs in the movies.

They may go by a different name, but the fjords of Norway share the beauty of the Scottish lochs.  They’re among natural features that greet passengers riding the Flam Railway.  The short route also offers breathtaking views of steep mountains, plunging ravines, rushing waterfalls and high-altitude farms.

Mountain scenery also lies outside windows of the Belgrade-Bar Railway along its route from Serbia to Montenegro.  As the train makes its way through the Dinaric Alps it crosses 435 bridges, passes through 254 tunnels and speeds through deep canyons.

The surroundings through which the Odontotos Diakofto Kalavryta railway passes may not be as dramatic as some, but more than makes up any such failings in other ways.  For one thing, it claims fame as the narrowest public cogwheel train in the world.  The tracks were constructed using materials found in the area.  They pass through a gorge nestled between steep cliffs that are home to waterfalls and caves, and by the oldest monastery in Greece, which was built in 362 AD.

The Ferrocarril Central Andino (top) also traverses a canyon, but there any similarities to its Greek cousin end.  As it travels some 200 miles through the Peruvian Andes, the train zigs,  zags, and winds through 66 tunnels, including one of the highest shafts built for railroads in the world. When it was constructed in the 19th century, this railway was considered to be one of the greatest engineering feats on Earth.

You may take a virtual YouTube ride on these and other trains by going to the following links: