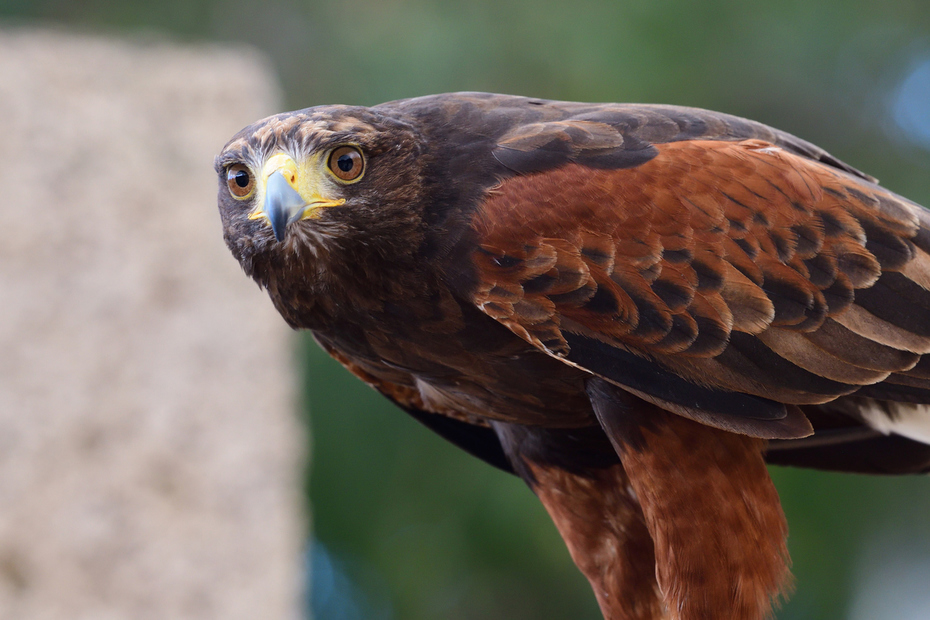 Feet firmly planted on the ground, left elbow out, forearm straight, hand and wrist covered with a thick leather glove, I looked apprehensively at the master falconer standing by my side. He had just sent a magnificent Harris's hawk into the air, soaring into the sky, then swooping down towards me. “He won’t attack me, will he?” I asked. “Not unless he mistakes you for a rabbit,” the instructor deadpanned, “and there is no chance of that”, he grinned. He had placed a piece of chicken on my glove and, sure enough, with a swish of feathers, the hawk landed on my arm, gobbled up the chicken at lightning speed and eyed me expectantly, not unlike a playful dog who wants his master to throw the stick again.

Practiced in Central Asia and the Middle East as far back as 1700 BCE to hunt food and introduced to central and northern Europe around 400 CE (by the Huns, it's thought), falconry became the sport of kings and aristocrats, and in the 20th century started becoming more "democratised" among enthusiasts from many walks of life. In recent years, it's grown even further in popularity, and has even been included as an attraction to the public by falconry centres, tour operators, and even resorts, offering the chance to experience these impressive aves de presa (birds of prey) up close and personal, learn how to care for them, and how to let them fly. I found one such place in Spain, the Las Colinas International School of Falconry, in the town of Campoamor, near Alicante where I live. 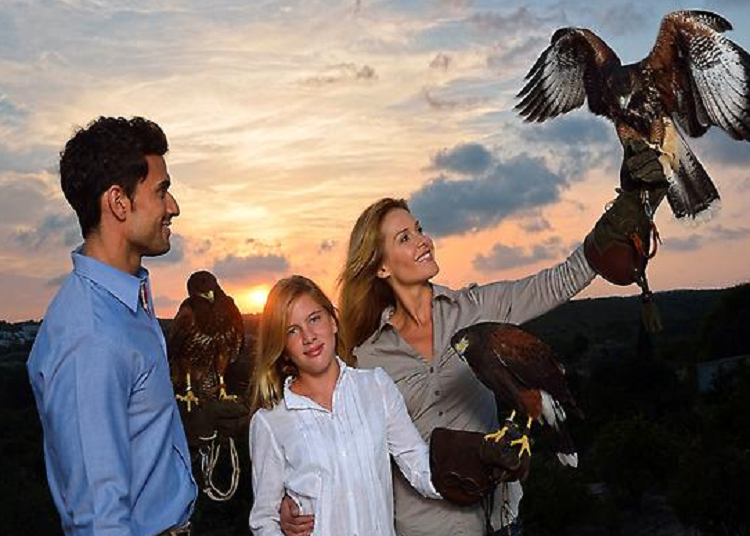 Basically, you walk with an instructor who carries the birds into the countryside whilst he explains how you have to hold them yourself; wrap the ties to which they are attached around your fingers; then let go and push them; and finally whistle, after you've placed their reward on your glove, to make them return. It’s a truly remarkable experience to see them fly and actually make them return to you - though also a bit intimidating to see a fierce-looking creature with a 1.2-metre (nearly four-foot) wingspan and razor-sharp talons extended and descending upon you. No flinching, though - it's not really about you at all; they're only fixated on that morsel of chicken. 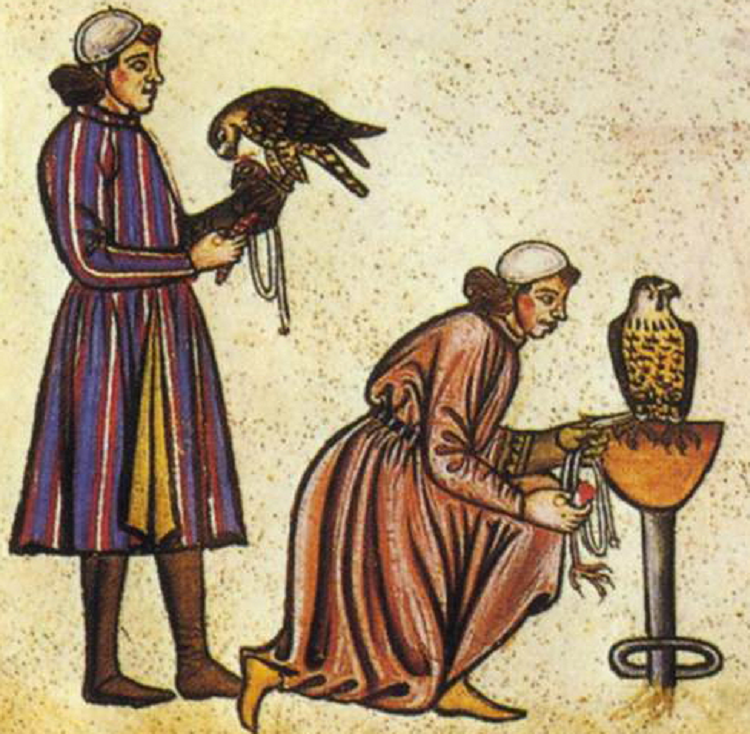 I also learned more about falconry's fascinating history. Gradually, especially after the invention of firearms made it easier to hunt animals, it evolved into a sport for the upper classes. During the Middle Ages, the sons of nobles were trained in hunting with falcons along with archery and riding, and spent days in the field with their valuable birds. Falconers were the men who trained and looked after the falcons, and were held in high esteem. The Book of St Albans, first printed in 1486 and attributed to Dame Julia Berner, lists a hierarchy of birds and which one was most appropriate for which social rank. Ladies rode on horseback with their falcons too, and mostly favoured peregrine falcons - prominent among them was Mary, Queen of Scots (in modern falconry, peregrine falcons are still among the most widely trained birds, along with the red-tailed hawk and Harris's hawk, and women are the sport's fastest growing demographic).

Terms of falconry even found their way into the English language, like "hoodwinked", which comes from the leather hood that is placed over a falcon’s head to keep it quiet and relaxed, and or "under the thumb", which refers to the way a strap tied to the bird’s foot is clamped under the thumb to keep it in place. In more recent history, as greater awareness of the environment and endangered species took hold, interest in falcons and hawks was revived and falconry schools sprang up in many countries of the world, among them Spain and the United States, with a view toward breeding and protecting the birds whilst allowing members of the public to enjoy a unique experience combining outings in nature with "meeting" and handling these majestic birds of prey.

In Spain, falconry was not introduced by the Huns - who never made it to Iberia - but rather by the Arabs, who ruled varying portions of the peninsula from 711 to 1492 (it remains a major pursuit in the Arab world, especially in Saudi Arabia and the Persian Gulf states). It became a sport of kings here too, as documented by El Libro de La Caza (Book of the Hunt) compiled in 1329 by one of that era's most powerful men, the Don Juan Manuel, Prince of Villena, listing the best places to hunt with falcons in Castile. 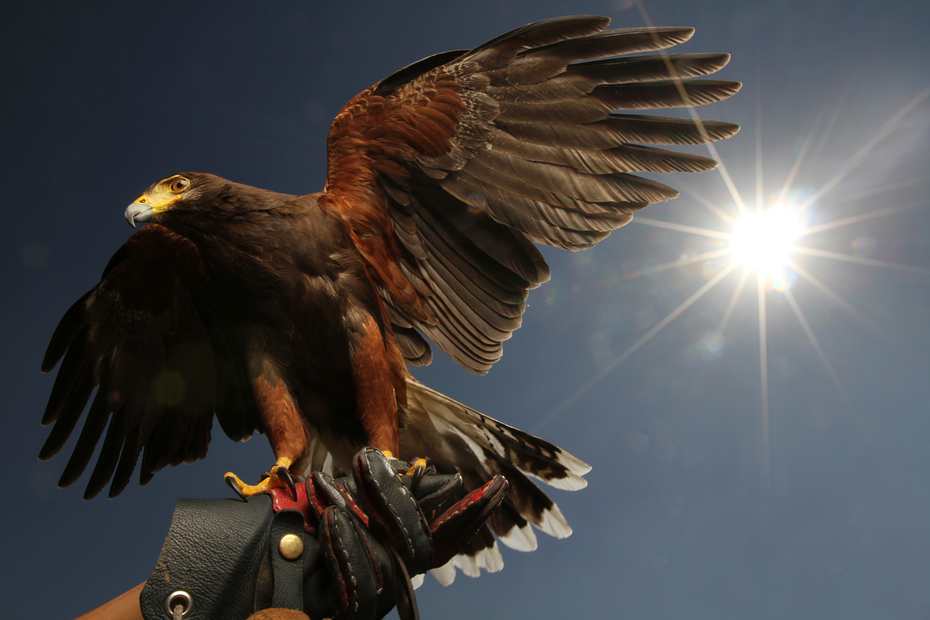 As over the centuries falconry extended its reach in Spain, it became such an embedded part of Spanish culture that in 2010 it was included for this pursuit on the UNESCO Intangible Cultural Heritage list along with 17 other countries (nine of which are Iberia destinations: Austria, Belgium, the Czech Republic, France, Germany, Hungary, Italy, Morocco, and Portugal). These days it also plays a great part in Spanish conservation efforts, with centres also playing an important role in breeding vulnerable species like the Eastern Imperial Eagle, osprey, and other raptors, and reintroducing them into their natural habitats.

(And fun fact: many falconry enthusiasts in the Gulf states now prize falcons imported from Spain - kind of like history gone full circle. And since this is an airline blog, fun fact number two: most Spanish airports and a number of others around the world employ falconers and their raptors to patrol areas around the perimetre to scare off other birds from getting in the way of air traffic, as "bird strikes" against engines and cockpit windshields can be a significant safety hazard.)

Falconry in Spain is pursued largely by various clubs of cetrería enthusiasts, along with hunting preserves, and competitions are regularly held. For you as a visitor, other places in Spain that work with raptors include Alicante's abovementioned Las Colinas International School of Falconry, which offers hourlong sessions. Down in Andalusia, in the Cádiz province town of Algodonales, Skywings Falconry offers three-hour sessions with these majestic birds, as well as a much more intensive courses of two to five days for those who want to go in depth. It also offers an innovative activity called "parahawking" (above), in which visitors actually fly and interact with hawks and vultures on the fly - an absolutely breathtaking experience, without a doubt!

There are several other spots in Spain where you can watch raptors in action whilst not participating, such as the "Birds of Prey" show at Tenerife's Jungle Park and the Jardín de las Águilas in the Málaga town of Benalmádena. But quite honestly, nothing beats the thrill of interacting with these powerful avians - I know for me it will always remain one of my memorable experiences of a lifetime.

Inka Piegsa-Quischotte is an attorney turned travel writer/photographer, currently based in Alicante, Spain, whose work has appeared at GoNomad, GoWorldTravel, EuropeupClose, and BBC Travel. Her blog GlamourGrannyTravels.com is dedicated to female baby boomers who love to travel in style and comfort.