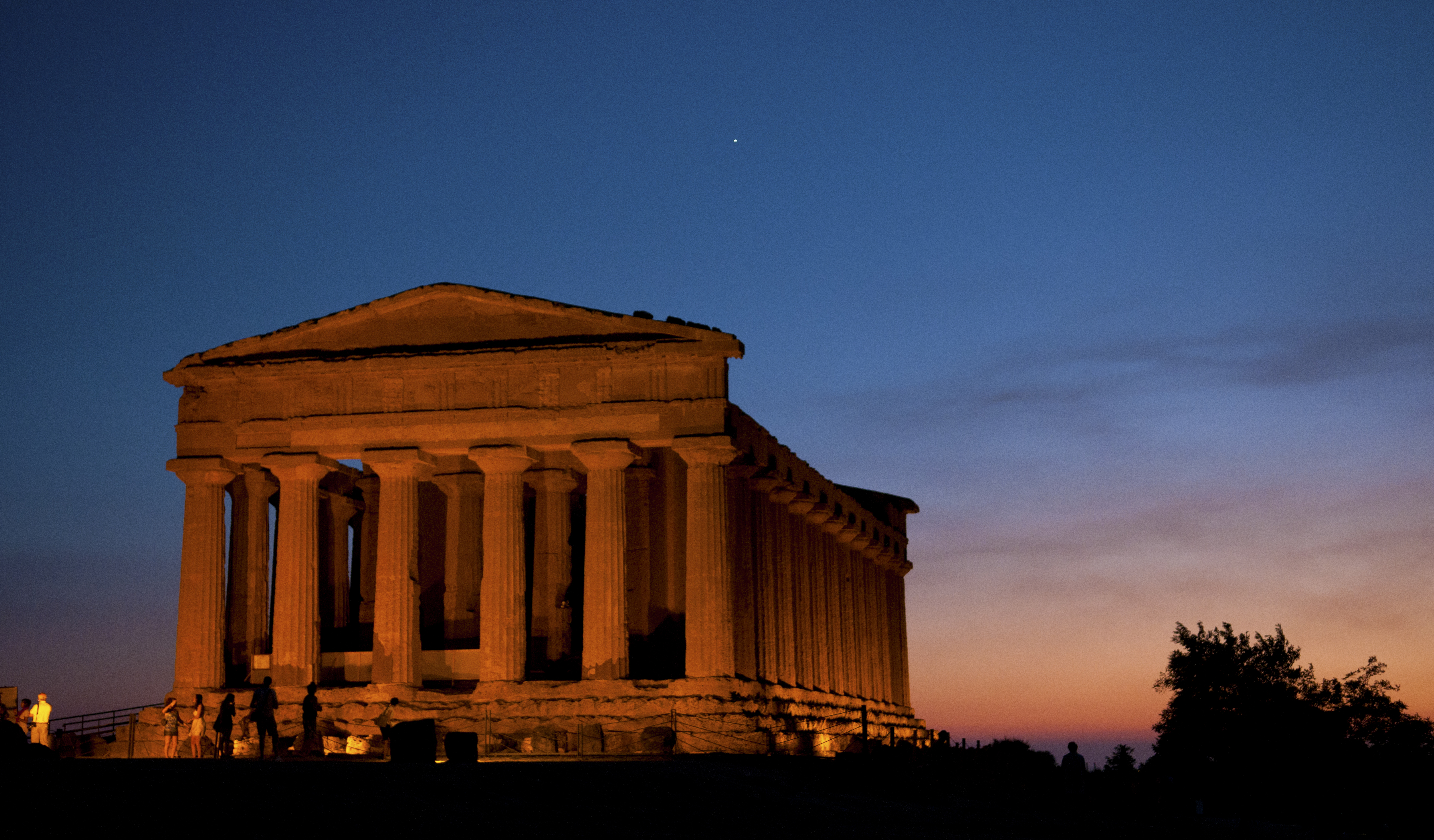 We had been to Sicily before, and were bewitched and beguiled by the land, the people, the food, the atmosphere. We have been to a good many places around the world doing travel writing. Sicily, somehow, for us held a special charm. We vowed to return.

Recently, in the spring of 2017, we did return. Our very complete itinerary was created by a good friend, Paola Vasta, founder and managing director of VP Luxury Key. She arranged for a car and an excellent and pleasant driver through Ulisse Tour Operator, founded by three young women of Sicilian and Spanish origins. Their company plans and designs tours, vacation stays itineraries and experiences. With lots of stops along the way with our ten-plus-day writing trip, everything went quite seamlessly. So kudos to Paola and the ladies of Ulisse Tour Operator. First stop in the trip for us was this 11-room retreat in the province of Trapani, on Sicil's west coast. It's a unique experience – the merger of nature and real.Sicilian landscape, a place where the past is felt but the present is very close to the surface. Located in the middle of vineyards, fluttering  birds, lots of  sunshine and clean, perfumed air, as well as rolling hills and long horizons of olive trees and in the distance the sea.

One of the highlights of our visit was a special wine-tasting experience with a highly informed and enthusiastic young man named Luka, a sommelier who shared just the right information. He came to symbolize the charm, the character of the Baglio Soria Wine resort experience, which then continued with a fabulous dinner with the owners Irene di Gaetano and Count Federico di Monte Jato.

The meal was a gourmet delight. - inventive, served in an elegant restaurant with fish and vegetables from the region (plus, of course, superb local wine), and the company was charming and well informed. A bit over two hours' drive down the coast, after an informative and picturesque walking tour to the Agrigento Greek temples (top), a UNESCO World Heritage Site, we enjoyed a truly Sicilian lunch at Terracotta Restaurant, uniquely housed inside a fabulous church in the city center of Agrigento.

Afterward, we checked into the four-star hotel Alba Palace in Favara, several miles outside the city of Agrigento and the Valle dei Templi (Valley of the Temples). Named for its owner Antonio Alba and supervised by general manager Marta Agro, it's a lovely, 20-room boutique hostelry in a restored 19th-century palazzo.

The large rooms and suites are spread over the first and second floors and are custom interior designed with a blend of traditional and contemporary materials, including oak and sheet metal. In its restaurant, Le Traveggole, tasty dishes of the best gourmet cuisine combined with the excellent labels of a wine cellar are all there for any traveler to enjoy.  And enjoy we did. It's featured in the newspaper La Repubblica’s Guide to Sicily for the fresh, exciting and original interpretation of Sicilian cuisine of chef Salvatore Tortorici.

Nearby, the new Marzipan - Museo della Mandorla Siciliana (Museum of the Sicilian Almond) has as its mission to promote excellence in the Sicilian food and agriculture sectors, with special attention to the cultivation, history, and culinary uses both sweet and savory of over 200 varieties unique to Sicily. Over near the southeast coast and the city and spectacular ruins of Siracusa, this two-year-old, luxury boutique hotel outside the historic town of Noto is named for the foxes (volpe) which once roamed its idyllic, dramatic spread, 15 acre rolling acres planted with grape vines and trees including almond, orange, and palms.  Anchored in an impeccably restored historic farmhouse, the four-star property has just 22 rooms, but feels much bigger and grander (even the swimming pool). The service and amenities are fabulous, and the elegant restaurant helmed by an award-winning chef specializes in updated versions of classic Sicilian recipes.There's also a large outdoor pool, tennis court, and a range of spa services. The Masseria delle Volpe is just a short drive outside the historic center of the small city of Noto, also a UNESCO World Heritage Site thanks to its late Baroque architecture. There was some time spent going around the fabled city of Siracusa, followed by a unique experience at a splendid and  unique property then just about to open, the Ortea Luxury Palace Hotel. There we met up with a good friend from the past, Patrizia Torri, now general manager of what is destined to be a very famous and successful hotel. An elegant Art Nouveau building designed in 1920 by architect Fichera incoroprating works by the sculptor Florio, this former post office, recently underwent  five years of renovation and restoration. Located in the historic center of the city, the hotel showcases 75 elegant and stylish guest rooms, We enjoyed a hosted lunch with the owner and management team members, and made a mental note that we want to return. After all we claimed a record – the first “guests”who had the distinction of being the first to dine at what will be a legendary hotel. 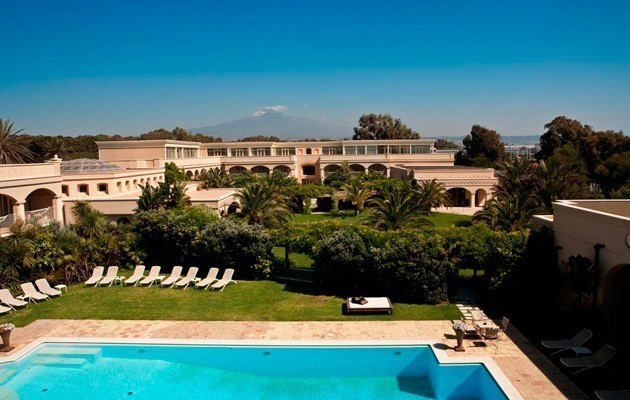 On our last night in Sicily, we overnighted at the first and only five-star luxury hotel in Catania, less than an hour up the coast from Siracusa. Our arrival was late and our departure was early, so sadly we did not get to experience much of this prestigious 13-year-old, 104-room property. However, what we did experience was a first-class mix of Baroque details and precious furniture with modern amenities and comforts.

One final note for shoppers: the Sicilia Outlet Village on the east-west road between Catania (40 minutes away) and Agrigento (90 minutes) is a great stopoff for great bargains from 140 brands and designer - especially strong in Italian brands, of course!

Harvey and Myrna Frommer are a wife-and-husband team who successfully bridge the worlds of popular culture and traditional scholarship. They are the authors of five six critically-acclaimed oral histories (It Happened in the Catskills; It Happened in Brooklyn; Growing Up Jewish in America; It Happened on Broadway; It Happened in Manhattan; It Happened in Miami and It Happened in Israel, 2018). They are professors at Dartmouth College going into their third decade where they teach oral history. Their many travel articles have appeared in such outlets as the New York Times, Newsday, New York Daily News, Los Angeles Times, Redbook, Golf Digest, International Herald Tribune, USA Today, Washington Post, Haaretz, Caribbean Travel and Life and many Internet sites.