All photos by Victor Block unless otherwise noted

It happens all the time with the tour operator Overseas Adventure Travel. I start out expecting to write about the trip itself – in this case, Sicily's Ancient Landscapes & Timeless Traditions"-- and I end up writing about all the things that aren't on the itinerary – what OAT refers to as "learning and discovery." Sure, I wanted to focus on the extensive ruins of the Greeks and Romans from the 8th century BCE; the city market initiated by the Arabs in 900 CE still operates today almost as it did then.

Built in 1174 the Norman Church was proclaimed by acclimation of the trip participants as “The most magnificent cathedral ever!” and a boat ride to a Phoenician island dating back 2,700 years. And that barely brushes the surface of the extensive itinerary that brought new adventures to our group of 16 day after day. But that’s where the story went awry. 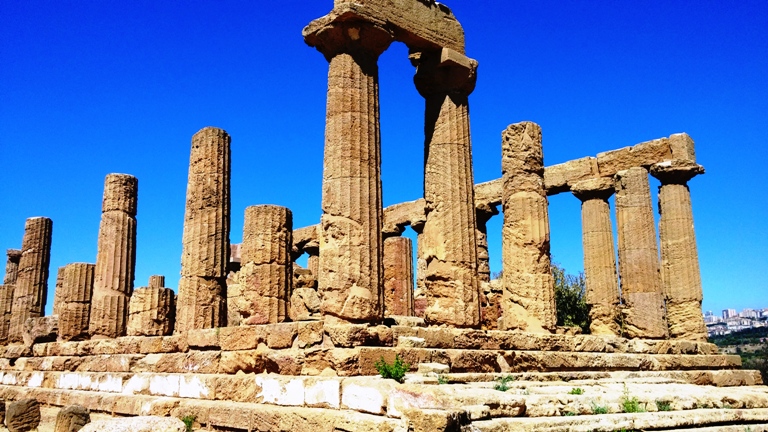 I found myself being equally surprised and delighted by all the little extra things we were seeing and doing -- and yes, often eating -- that weren't on the itinerary, the L&D moments that reflect the culture and deepen the immersive experience already embodied within the OAT itinerary – but which differ for every trip.  You will probably not experience what I did, but you will be enamored by whatever you do.


While exploring the capital city Palermo, we stopped at a tiny, nondescript storefront with antique-looking sewing machines and irons - but okay, the owner is a tailor. How then to explain all the old instruments strewn everywhere? The tailor is also a musician. He sang along as he played a 50-year-old mandolin. Come for repairs; stay for the repertory!  Such an OAT moment – which places a great deal of attention on offering offbeat examples of local culture that are nowhere on the itinerary.

As soon as we arrived in Castelbuono, a 14th-century medieval village whose history dates back to the Arab influence of the 800’s, it was time for another discovery: a variety of Sicilian pastries washed down with samples of liqueurs such as emon, cinnamon, tangerine, and prickly pear. By this time, it was hard for me to work up an interest in the surrounding history, usually a passion of mine. Stopping for a “taste” can translate into a marathon multi-course mini-meal. So yes, often L&D has to do with food – which is understandable: aside from the Mafia, food is one of the things Sicily is best known for. 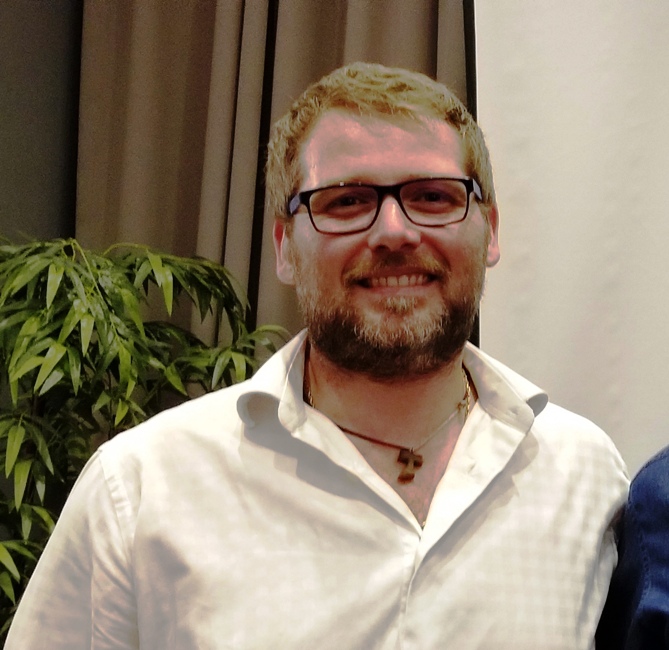 Because another OAT hallmark is its emphasis on controversial topics, a discussion of the Mafia was not unexpected. But actually meeting with Angelo Provenzano (above) - the son of Bernardo "Bernie the Tractor" Provenzano, one of the most notorious mob bosses in Sicilian history (from 1993 to 2006) - most certainly was. Kept in hiding for the first 16 years of his life, Provenzano recounted the difficulty of separating his feelings for his father from his feelings about him – and the impossibility of leading a normal life despite having no connection himself with la Cosa Nostra.

It should come as no surprise that the Mafia is still alive and well in Sicily - though not to the level that another Godfather movie is likely to be produced. In response to a question as to the accuracy of those films, Angelo replied: “Except for certain Hollywood effects, the films are basically realistic.” Angelo’s birthplace? The town of Corleone, of course. A name everyone in the room knew well. 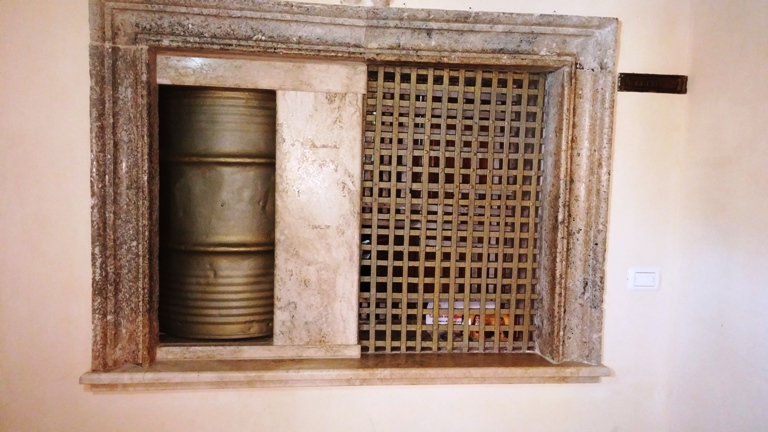 From Mafia to marzipan - knowing that Sicily is known for this favorite almond-paste treat of mine, I asked our guide Alessio where best to buy it. He said: “We'll find some,” and ten minutes later we found ourselves at a small Benedictine convent, built in 1092, where cloistered nuns have been making sweets for years, after as the story goes the Pope came to visit but since it was winter there were no fruit on the trees – so the good sisters made little fruits out of marzipan and hung them on the trees. And they've been selling their wares to all comers ever since, via a charmingly antiquated wooden-mesh door that revolves to reveal its marzipan and other delicacies.  As responsive as I knew Alessio to be to special requests, I thought, “Nah, he couldn’t possibly have had enough time to set that up…” 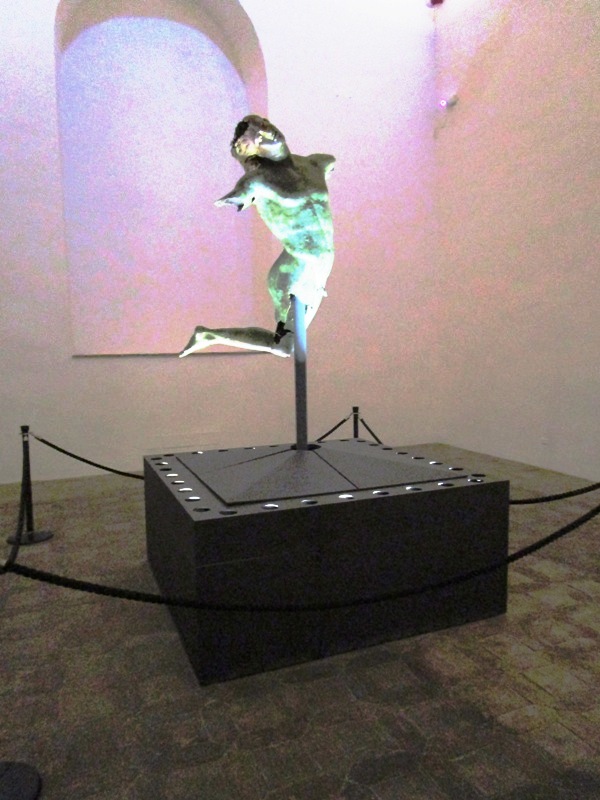 Then in the small por city of Mazara del Vallo, on the west coast, we visited a museum showcasing the Dancing Satyr, a bronze Greek statue from the 3rd century BCE that was pulled from the sea in 1998 in the nets of some fishermen. As fascinating as the story was -- an archaeological event that captured the attention of the world -- it didn’t compare with the unexpected meeting with the boat captain who made the discovery. His personal story was even more enthralling. 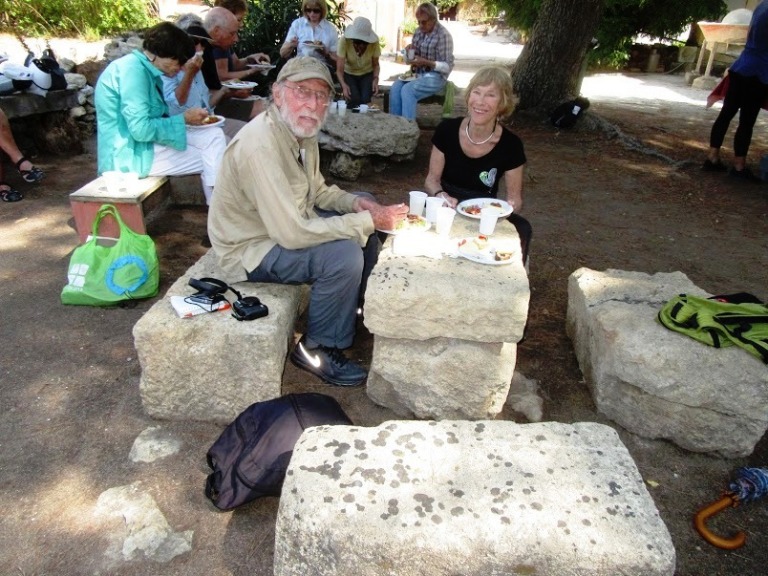 Picnic lunches are hardly unusual on tours. But when they take place on an island settled by Phoenicians some 2,700 years ago – leaving some of the world's largest collections of Phoenician ruins -- and your picnic table can be a stone from one of their former structures - imbuing your humble repast with the echoes of millennia of history.

The Romans and Greeks who came later left even more of a mark. The Valley of Temples (top) was colonized by some 50,000 Greeks some 2,600 years ago, and the remains of their multiple temples constitute the second largest archaeological site in the entire world (though only one of those temples survived intact, while others were reconstructed from original materials). Then the Romans showed up in 600 CE and built their own structures on top of the Greek ones. Our local guide stopped to pick up what to me looked like a number of rocks which he then identified as a rooftop tile and a piece of pottery or a jug - just lying there. Still. After 2,600 years. It's so hard to fathom that anything can survive that long. So sometimes itinerary items are pretty cool, too.

And at the end of the trip, after visiting sites representing Roman, Greek, Norman, Arabic, Carthaginian, Phoenician, Byzantine, and Spanish occupation – and I’m sure I’ve left some out – we arrived in Syracusa, an ancient city on the southeast coast which boasts remnants of all of them - there were ruins from everyone everywhere. Then during the boat ride around the nearby island of Ortigia, we sampled some Sicilian almond liqueur to get us through the 40-minute excursion. And why not? A touch of alcohol can also be a nice little cultural experience. 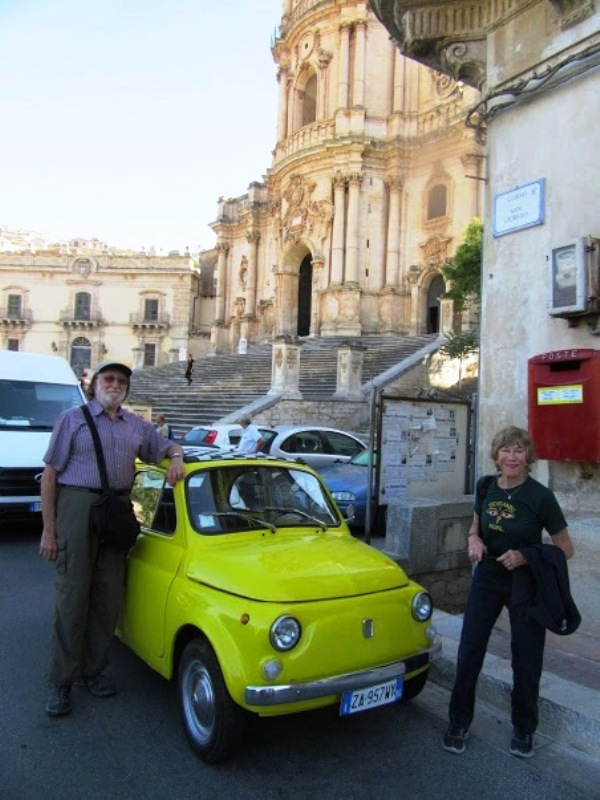 Driving an hour or so southwest, we then explored the medieval city cienter of Modica - which of course was fascinating, but the way we did it was even cooler - joy riding in vintage, iconic Fiat 500 sports cars (above) over steep, twisty, curvy, windy, narrow, cobblestone streets. First made popular in 1957 as a readily affordable automobile, these refurbished convertibles – smaller than a Smart car – still barely fit on alleyways that were unfathomably two-way. Warning: “Do not put your hand outside the car or you’ll end up losing it.” Sort of like a Disney ride threatening to go off the tracks. At this point, the fact that we were driving through a beautiful 12th-century Norman city felt like just a bonus.

Another itinerary highlight worth mentioning is the Museum of the Landing in one of Sicily's main cities, Catania, a moving testament to the end of Italy’s involvement in World War II. Operation Husky took place in July and August of 1943 and helped bring about the collapse of the Fascist régime of Benito Mussolini had just collapsed in July 1943. Upon entering a replica of a Catania street from those days, we suddenly heard an air raid siren – and were quickly ushered into the bomb shelter before the door closed. That was all the time we had if we wanted to live. What then ensued for a minute and a half – planes shrieking, bombs dropping, dogs barking, hysterical cries of anxious people – actually went on for hours. The shelter shook and as much as I knew this was only a simulation, I could still feel the terror of those who had to endure such trauma day after day for years. We emerged to find ourselves surrounded by rubble. The rest of the museum accurately relates the people and events who suffered through this sad part of Italy and Sicily’s history. And indeed it was nice to hear how welcome the Allied forces were once they arrived! 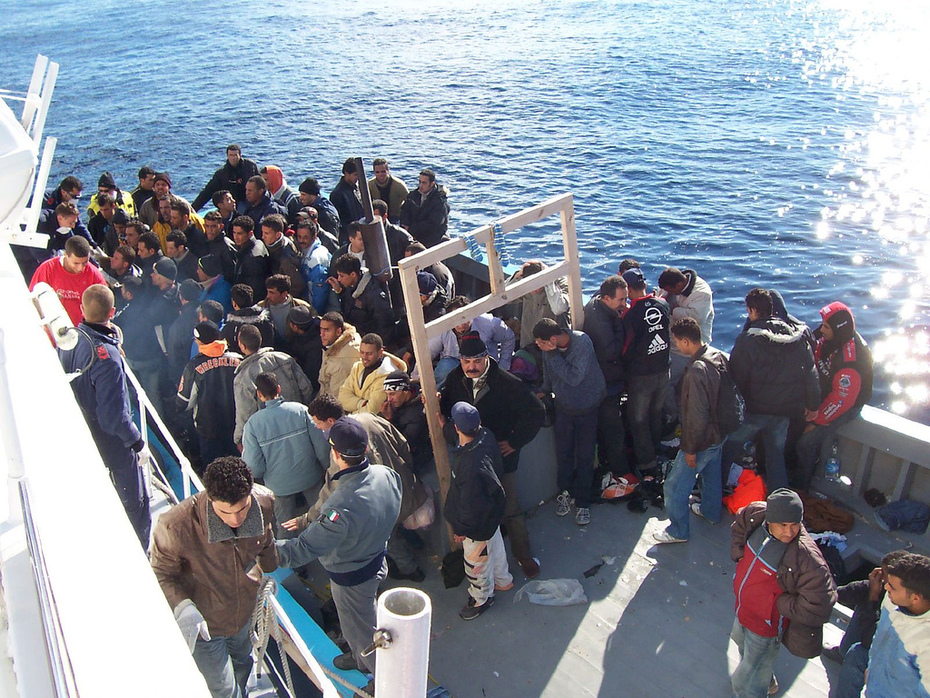 
And again, back to OAT's embrace of controversial topics, we met with members of Casa di Maria, an organization which aids young immigrant girls who illegally land in Sicily, where a sign at one port declares “Welcome Refugees” (though the welcoming of refugees is now being challenged by the new government led by the Brothers of Italy party). And it was harrowing to listen to 19-year-old Joyce’s story of being lured from her home and family in Nigeria with promises of an education in Europe, only to find herself part of an agonizing nine-month ordeal spent in many refugee camps in Libya and Syria along the way under abusive, horrendous conditions as a part of a sex-and-drug trafficking operation. She was fortunately saved by Casa di Maria upon her arrival in Sicily; but most are not. No one exited that room without feeling emotionally drained. Again. 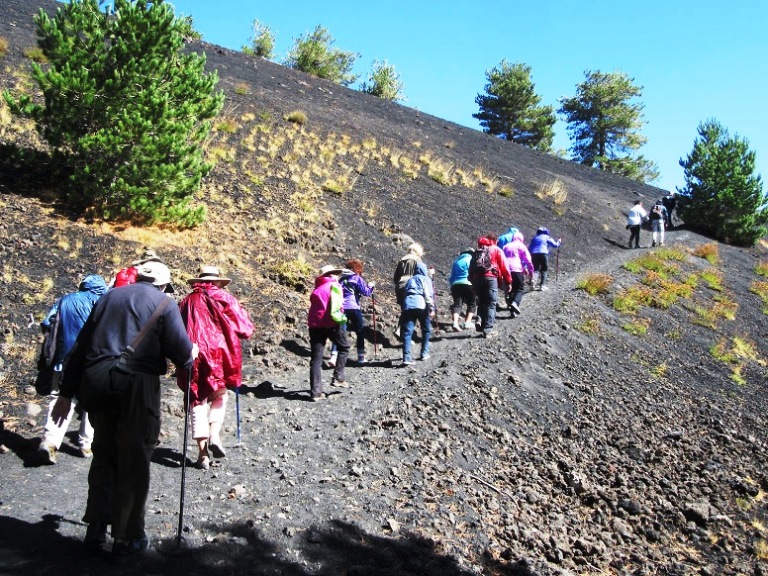 Then there was Mount Etna on the east coast just under four hours north of Catania – at more than 10,000 feet high, Europe's largest active volcano. Although the last eruption was in May 2017, we were repeatedly assured we were in no danger of a repeat. I’m a hiker. I’m used to climbing over rocks and roots. But this was my first experience with lava stones and fields – a topography I had never encountered before. As we climbed up the almost two-mile trail, we passed two centuries worth of vegetation from tiny tufts of green still recovering from earlier eruptions to huge, long-standing pine trees of old. I’m a travel writer and I’m supposed to be able to bring experiences to life but this was so surreal and otherworldly, so without comparison to anything I’ve seen before that I feel inadequate to capture it in mere words. A stop afterwards for a shot of "Fire of Etna" – a 70-proof concoction of rose petals and herbs -- shook me out of my volcanic revelry.

And by the way, finally, after our farewell dinner in Catania, it was hard to believe there would be yet another L&D moment. After all, it was late – and we all had early planes the next day. But indeed we headed into town to a small, outdoor shack where the vendor more doubled as a bartender – even more a mixologist, a creator of drinkable art. Tamarind syrup, fresh squeezed lemon, soda water and then the pièce de resistance - baking soda! All shaken up with gusto. The whole point? To make you burp. A lot. A Sicilian tradition, apparently. And very successful Sicilian tradition. Who wouldn’t want to go on such a tour?