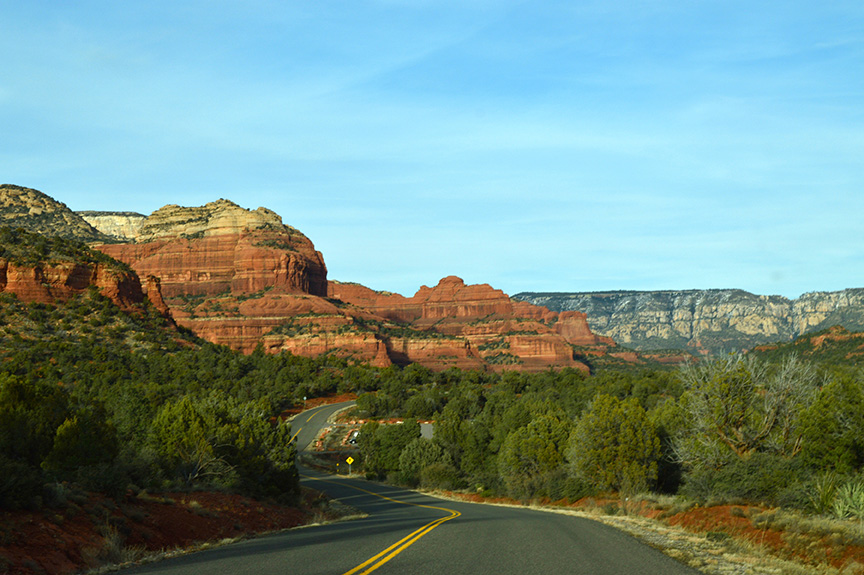 Sedona. The name has become synonymous with the spiritual, mystic, peaceful. It is indeed a lovely place and each of those adjectives suits it well.

It is a place where red rocks rise up out of red-colored earth of the same hue. Native American flute music plays through my mind as I traverse the trails and the roadways. It suits it perfectly.
I first heard the flute music as I stepped from my room at the resort  – a casita, actually. The sound carrying gently on the morning air. I found out later that it was not piped in as I had originally thought but came from - out there. I met, briefly, the man responsible for the music. I didn’t get his name but he told me that twice a day he climbs to the top of the rock where he sits and plays his flute. It may sound odd, but here, in this canyon, in this landscape, it makes perfect sense. The town of Sedona is full of shops, restaurants and art galleries. A happy place to wander and browse and wish I could afford some of the wonderful sculptures and paintings that were so tempting.
Airport Mesa is the place to be at sunset, as the sun casts its golden rays and the red rocks of Sedona turn even redder in the glow of the setting sun.
Originally I had thought that the resort I was staying at was too out of the way; I would feel isolated, what would I do there? After three days I never wanted to leave. Enchantment Resort is really only about a 15-minute drive from town, but first driving there in the pitch black of night it seemed lonely and isolated. It is anything but!
It provides, tennis, golf, hiking, pools, restaurants, gift shops and a spa. Daily activities are offered, most of them at no extra charge. I woke every morning to orange juice and the morning paper outside my door. And if you feel you are due for a splurge, which I highly recommend every so often – this is the place to do it! 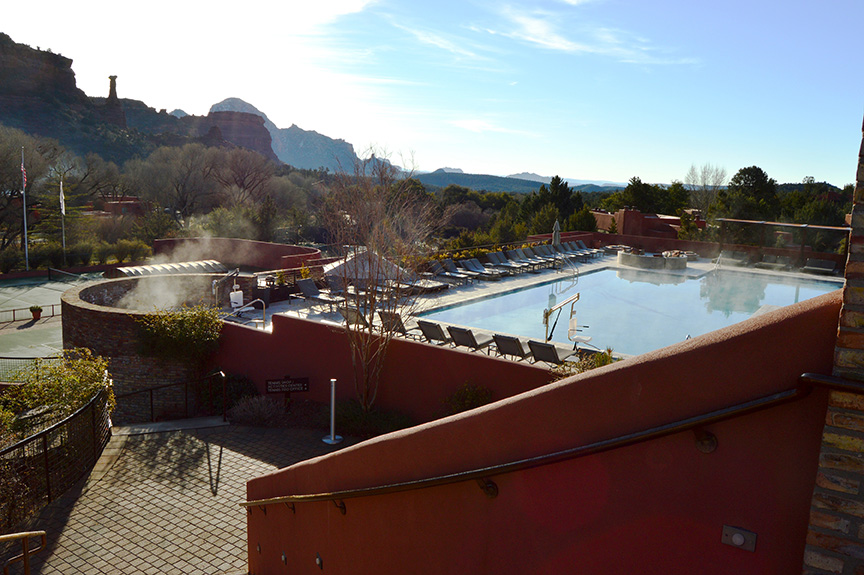 In the spa I enjoyed spending some quiet, reflective time in the steam room. I loved the steam room! I first tried the dry sauna, but I swore I could feel my hair getting brittle. It occurred to me that if my hair was drying out so was my face and at this stage of my life I don’t need either, so I switched over to the steam room. Sitting in a steamy wet cloud until my skin was dripping felt wonderful! And I didn’t feel like I was headed for spontaneous combustion.
Also in the spa, which incidentally is a separate building, is a kiva room. Based on the Native American kiva, a room used for religious rituals, this room is round, has a dirt floor, cushioned seating all around and in its center is a huge chunk of petrified, wood-turned fountain. The water gently bubbles up and slides softly down the sides. If I never believed in this "vortex" theory before, I do now. The first time I set foot in that room I felt weak, and suddenly lighter, as an actual physical sensation of a weight falling from my shoulders overcame me. Nothing like that has ever happened to me before. I returned to the kiva room several times during my stay, once for a ceremony and the other times to simply bask in its peace. It was akin to sitting in an empty church; Silent, peaceful, spiritual.
A couple of hikes also put me in good spirits. On the first one, I tackled the hill climb, ending at the base of the flutist’s rock. It was a grand view of the surrounding landscape, the resort spread out below me. It was not too steep, nor too rocky, but a decent workout.
The second hike took me in the opposite direction and was more level. I went farther than I should have, inadvertently passing the end of the resort property. I had seen a fence, but not a gate, so figured I could still go on. Unlike the other trail, this was by far the less travelled. The further I went the more I wondered if I should turn around. Passing no other people for quite some time, I was getting a little worried. Unlike the other trail which was dry and open, this path weaved through the brush and was quite muddy in spots from melting snow trickling down the sloping hills. I didn’t want to slog through the mud again, but I wasn’t sure about continuing on either. I kept hearing faint noises and vaguely wondered if the family of wild-piglike javelina, I'd heard about was out there and if they were aggressive. But what had me more scared was thinking about the sign that was attached to the fence leading to the trail: "Bear Country..." If it was a bear, should I scream? Who would hear me? Play dead? Run? No. Not run. I didn’t really like being alone out there. At long last, some people came up the path towards me. I asked if they knew how far the trail went. They did: a few more miles, into a box canyon, with some ruins at the end. The only way out was the way I came in. They’d had an early start hours before and were on their way back.  I joined them. Looking up into the rock, full of crevices and cracks, we noticed a couple of caves. Caves that long ago peoples had lived in. I found my way back to the gate, grateful to have some company. 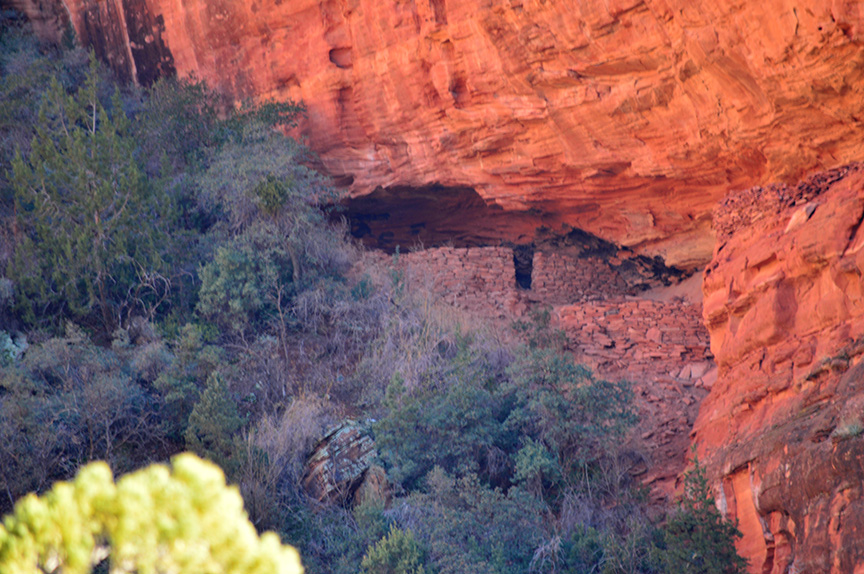 My last night in Sedona, I decided to drive out into the countryside and watch the rocks put on their sunset show, and then head into town to Oaxaca - a Mexican restaurant I knew of. As I headed toward town I saw a full moon coming up behind those great red rocks on one side of me as the sun was going down on the other. It was a beautiful sight and I was not the only one pulled over to the side of the road standing outside my car, camera in hand. 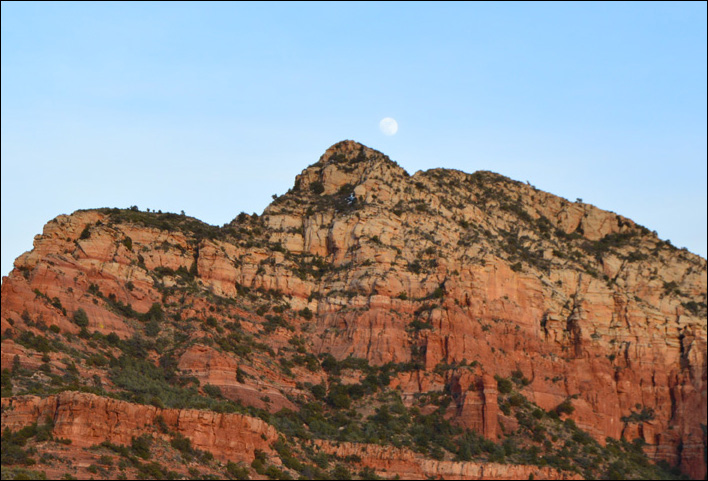