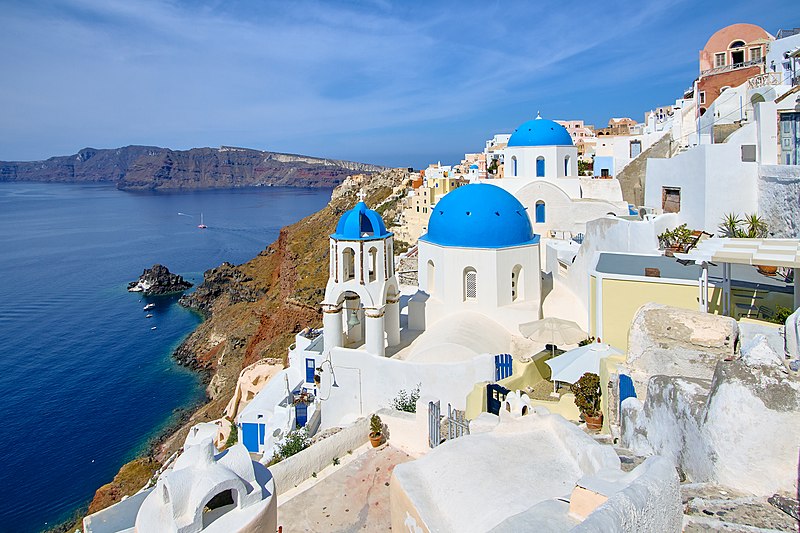 The small, circular Santorini archipelago (known in Greece as Thera) is nestled in the southern Aegean Sea's Cyclades Islands, with two inhabited islands and four others that are uninhabited. Its enchanting natural and manmade beauty makes it a great holiday destination, and while many have visited via cruise ship, cheap flights to Santorini are also in high demand, owing to its popularity among holidaymakers. Here are four of the top draws, mostly on the main island of Santorini itself:

Santorini and second largest island Therasia have nearly two dozen towns and villages, most of them composed of white cubic houses, churches, and other structures along narrow, winding lanes and stairs. Most visitors experience the islands' capital Fira, but others include Emporio, Imerovigli (known for its sunsets), Kamari, Oia, and Perissa.

Despite poor soil conditions, Santorini has a long established winemaking tradition and indigenous grape varieties (such as Assyrtiko) dating back to classical antiquity, and turns out some distinguished vintages, including current specialties including dry white and sweet dessert wine. There are around 20 wineries, which can be visited individually or on an organized tours, and also a wine museum in a cave near the village of Messaria.

There are some 20 beaches here - mostly on Santorini island - ranging from pebbles to sand colors ranging from tawny to gray to black to even red. Notables include Kamari Beach, on the east coast, a volcanic black-sand beach which at around five kilometers long is also among the longest uninterrupted stretches of seashore in all of Greece. Meanwhile, Red Beach gets its eponymous colour from volcanic sand and is dramatically backed by equally reddish cliffs.

In terms of ancient history, Santorini is known as the site of Akotiri, settled by humans as far back as the fifth millennium BCE, destroyed by an earthquake in the 16th century BCE, and excavated since 1967. Visitors can walk through the excavation as well as see many of the artifacts and explanations of it all at the island's Archaeological Museum as well as the Museum of Prehistoric Thira.