The famed El Cid battled the Moorish invaders in the area around Valencia during the Middle Ages of Spain.  Unless El Cid held dinner parties with the remaining Moors, it is unlikely that he enjoyed Valencian seafood paella because its origins in Spain developed later from the Moors influences on cooking with rice.

Where is Valencia, Spain?

Valencia is on the eastern shore of Spain, about half way between the Pyrenees border with France, and the thorn in Spanish pride at British-occupied Gibraltar.  That Spain nearly touches Africa is how the Moors got a foothold in the eighth century. It is warm and beautiful, with classical beaches on the Mediterranean Sea.  Rent an ocean view room at the Las Arenas resort hotel and, nearby, walk along the coastline area of traditional restaurants offering some of the best food in the world.

Previously, I reported on cooking Spanish paella with a traditional recipe (here is a pdf version).  Here are a few insights on eating Lobster Paella (repeatedly, I might add) in Spain. Valencia is where paella originated in Spain and recipe originality is treasured when cooking paella.

The previous recipe included some meats in the mix and green vegetables, along with seafood.  This fact does not detract from the recipe authenticity, just that it is actually a “mixed” version of the local delicacy.  Another version might include mostly meats, and in Spain this may include rabbit, snails, chicken, or duck.  Seafood paella, as seen in the picture here, beyond not including green vegetables will have several changes to the recipe when in Valencia. 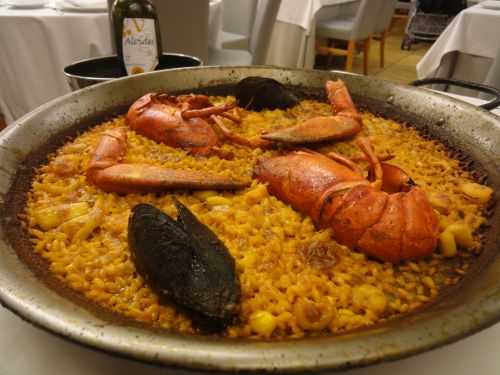 One noticeable difference is the previous recipe has rice in the pan bottom that was cooked until nearly crisp.  This was done over a flame, not in the oven.  The broth of the cooking was absorbed into the rice before serving, taking about five minutes with a covering of the pan.

Stirred into the rice was small shrimp without shells. The shrimp was cooked in the pan with oil before making the rice and broth combination.

Finally, the clams and lobster was split, broiled, and then simmered in the pan with rice to extract a fabulous flavor.   When combined with the saffron, the taste of the lobster infused rice was indescribable.

A great local white wine recommended by the waiter complimented the dish.  The area of Barcelona through Valencia has many fine wineries and sparkling wines here are excellent. Sparkling wine, called cava, is produced principally in the Catalonia region, around Barcelona.

Overall, it is difficult to go wrong with seafood while in Valencia, and for fruitier refreshment try sangria (another Spanish original) at the hotel outside lounge while taking in the ocean beach beauty in afternoon sun.