150th ANNIVERSARY OF THE CIVIL WAR: DO SOMETHING DIFFERENT

The 150th anniversary of the American Civil War began April 12, but for many of us who are pinned down by work and school, the occasion really begins this summer. And make no mistake: The Civil War sesquicentennial is a very big deal. Without the Civil War, the United States would have split into two politically, militarily, and economically weaker countries. What's more, slavery might not have ended until the 20th century.

The costs of the war were huge, too. Vast swaths of land and property, especially in the South, were destroyed, and some 625,000 American soldiers were killed. For comparison's sake, 400,000 U.S. troops died during World War II. 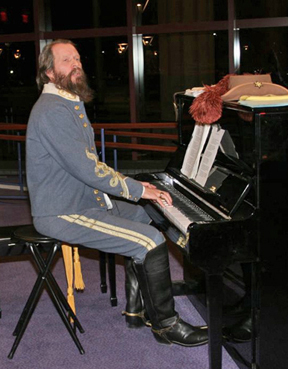 But despite the achievements and the losses brought on by the Civil War, the 150th anniversary is not all memorials, re-enactments, and conventional battlefield tours: The sesquicentennial has also inspired a lot of offbeat Civil War tours and events – some wacky, some enlightening – proving that good old American entrepreneurship has survived and thrived. So yes, you can do something a little different this summer, courtesy of a few folks with real horse sense, tours that tell the formerly neglected African-American story, one baritone, and 100,000 ghosts.

Of the gazillion ghost tours offered in the U.S.A., Ghost Tours of Harpers Ferry  recently rated #1 on Tripadvisor. Two reasons for that: First, John Brown's failed raid on Harpers Ferry (1859) is said to have created a lot of ghosts. Exhibit A: Guide Rick Garland declares that orbs, vortexes, and streaks of light have been seen in the alley where Dangerfield Newbie, one of John Brown's raiders, was killed. Second, Garland (above), six-foot five and a dead ringer for Jeb Stuart, is a great story teller.

This baritone and pianist also offers intimate O' Be Joyfull  performances of Civil War period music. He lets people vote over whether they want to hear the Yankee or Confederate words to "The Battle Cry of Freedom." And, he adds, I've seen veterans cry over 'When Johnny Comes Marching Home.'”

Surely not because of the price: just $10. 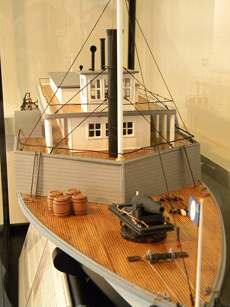 We tucked this into a story on offbeat tours only because it emphasizes the African-American experience, which used to be pretty much neglected when people talked about the Civil War. But think about it: What was life like for blacks in the 1860s who were owned by white people willing to risk their wealth -- and sacrifice their lives -- for a government dedicated to maintaining slavery?

So after you've visited Fort Sumter, where Secessionists first fired at Union troops on April 12, 1861, take this two-hour walk with Old Charleston Tours. Goosebump moment: When guide Michael Brown points to where Robert Smalls, a slave, "borrowed" a Confederate transport ship (a model is shown here) and sailed it out of Charleston Harbor -- past five Confederate checkpoints, no less -- to freedom. Smalls soon visited Abraham Lincoln, who appointed him a Naval captain, and he later risked death, or worse, by piloting a Union warship right back into Charleston Harbor.

This is Part 1 of a story first posted on IndependentTraveler.com. For Part 2 -- touring parks by funeral buckboards and Segways etc. -- click here.