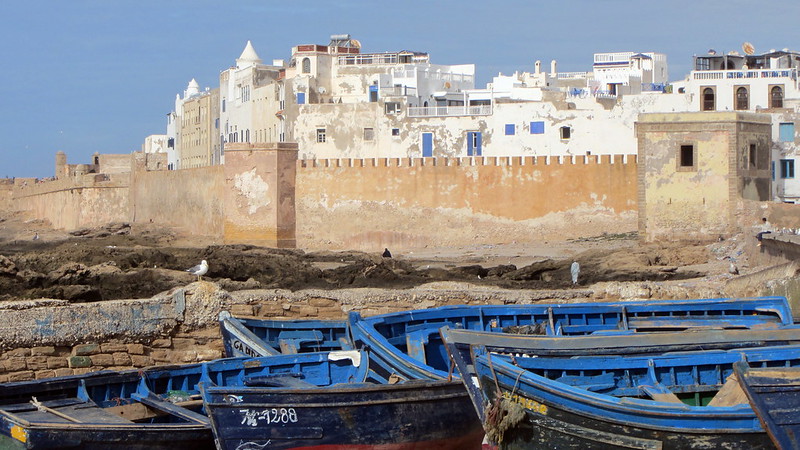 Ever since first visiting Morocco more than a dozen years ago, I’ve always marveled that this North African country manages to pack such a whole lot of interesting into such modest dimensions (it’s a little bigger than California, less than a third the size of Quebec, and merely a little over a quarter as spacious as the U.K.). I mean, here the fascinating destinations just keep on coming – Fez, Marrakesh, Meknes, Rabat, Tangier, Casablanca, Ouarzazate, the Atlas Mountains, Tetouan, Agadir and so on. But one place in Morocco that I especially love because of its vibe, style, location, and unusualness, is a city called Essaouira, a drive of 2½ to three hours from Marrakesh and 2½ hours from Agadir, the resort town that receives much of Morocco's sun-'n'-fun tourism.

Something a Little Different

What makes it unusual? Well, as with many cities in Morocco, in Ess you can certainly “come with me to the kasbah” and wander the byways and caravanserais of a deliciously mysterious old medina (a UNESCO World Heritage Site) and Jewish quarter, sampling exotic shops, galleries, restaurants, tea shops, and cafés along the way. But unlike even other Moroccan coastal urbs like Tangier, there’s just something especially charismatic about Essaouira. To begin with, it’s breezy, white, and bright, perched just over halfway down the country’s Atlantic coast, with temperatures rarely dropping below the 50′s Fahrenheit or rising above the low 70′s (it’s so breezy, in fact, that it’s one of the world’s better regarded windsurfing/kitesurfing meccas). But another big part of what makes it different is that much of what you see of Essaouira today was built along European lines, starting in the early 16th century with the fortress of Mogador, built by the Portuguese, and continued by a Moroccan ruler in the 18th century using European architects and engineers.

As in centuries past, fishing is still very big here; on my first visit I’ll never forget going down to the docks and lunching at a simple table on squid literally taken right off a boat not ten feet away and charbroiled right in front of me. But beach and cultural tourism have been making big inroads for years, and since Orson Welles filmed his Othello here in 1952 Ess also became a spot on the international hippie trail in the 60’s, it’s been a destination for celebs and artsy-fartsy types, from Jimi Hendrix, Cat Stevens and Maria Callas to Colin Farrell, Orlando Bloom, and Liam Neeson. It’s also been a center for a form of Moroccan music called gnaoua, and June’s International Gnaoua and World Music Festival has become known as “Morocco’s Woodstock.”

Pretty  fun-kay, no?  Check it out, and I guarantee you’ll fall as much in love with Essaouira as I did.