Every fall, tourists converge on New England for the opportunity to witness one of nature's most dazzling spectacles, when leaves explode with color in one triumphant grand finale to a summer of photosynthesis. Few realize that "fall" colors may also be found as far south as South Florida... in the spring. Shortly after the vernal equinox (this year on March 20th), certain species of subtropical deciduous trees put on a show that, while admittedly not of the magnitude of New England's, is nonetheless a visual treat for locals and tourists alike.

Perhaps the king of the show is the seagrape tree (Coccoloba uvifera), whose large oval leaves turn shades of gold and burgundy reminiscent of a northern maple. The fruit of this tree is not a true grape at all, but a tasty grape-like fruit from which jams and even wines are made. The best colors occur closer to the coast, so to see the seagrape in full splendor, try the resort island of Key Biscayne, in particular the Bill Baggs State Park at the end of the road, which in my opinion has South Florida's most beautiful beach and a historic lighthouse.

Not far behind, the majestic mahogany tree (Swietenia mahagoni), from which most of the world's fine furniture has traditionally been made, also provides a stunning show with bright yellow, gold, orange and red varieties, often standing side by side. The specimens in the Sears parking lot near my house (below) are especially jaw-dropping. Many other trees, shrubs, and vines change colors, too, among them the snapdragon tree pictured below, whose leaves turn bright gold before covering the ground with their splendor; the various varieties of crepe myrtle, whose leaves can 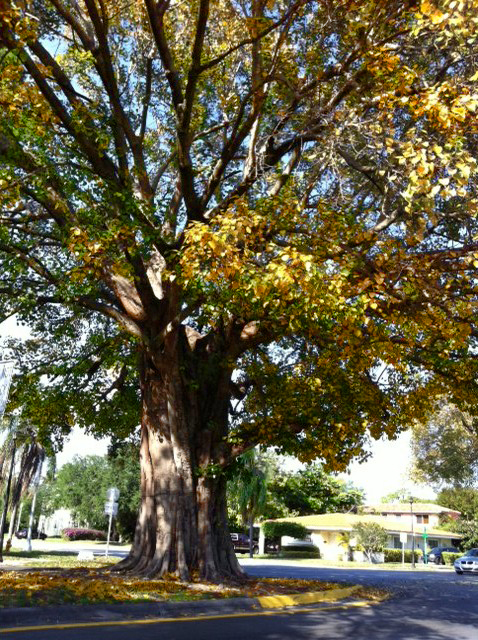 turn anywhere from gold to deep red, though earlier in the season; and the ubiquitous Virginia Creeper vine, which grows wild here as it does up north and puts on no less delightful a show.

Perhaps more people don't pay attention to Miami's spring colors because there is so much else going on: flowers bloom profusely this time of year as they do elsewhere, and so many evergreens abound that they "dilute" the effect of the colorful trees. I'm not proposing, of course, that anyone make a springtime pilgrimage to South Florida to see the Sears parking lot; save your money for New England. But I would say, if you happen to be here this time of year, don't forget to appreciate the spectacle of color that nature puts on to celebrate the arrival of spring -- and, if you are truly into exuberant flora, by all means visit the Fairchild Tropical Botanic Garden, which should be the subject of another blog post all its own.