Have you considered what the old guy or lady down the street may have done in life beyond work at the supermarket? The people largely responsible for our freedoms are passing away. This June is the 70th anniversary of the World War II invasion of occupied France, known as D-Day.

A benefit of using Dulles is the close proximity to the National Air & Space Museum, Udvar-Hazy Center. Here one can see up close the real Enola Gay B-29 that dropped the A-bomb in WWII, shark-mouthed Curtis P-40 famed by the Flying Tigers, Marine Corsairs, German fighters and rocket planes. The Udvar-Hazy Center is a one-stop aviation history tour completed in about four hours for those with time constraints.

At most travel destinations, it is hard to do so much in a single trip but Lynchburg has it all in one package. Beyond staying in town for great food, the period architecture includes the Federal style mansions of the Victorian-era tycoons.

Suitable for all ages is the snow skiing fun at the Liberty Mountain Snowflex Centre where kids can tube down a manmade snow covered hill. Snow boarding lessons are available and it is fun to simply watch the young and daring fly and twist in their jumps.

Civil War buffs can see Appomattox, where Lee surrendered to Grant. The Museum of the Confederacy there has actual battlefield uniforms worn by legendary soldiers, weapons, and artifacts. These artifacts include General Lee’s dress uniform worn at the surrender and his death mask.

Overall, because of its three railroads hub, Lynchburg had hospitals, prisoner encampments, and battles nearby. This area of the Blue Ridge Mountains and Shenandoah Valley was encompassed in the famous Jackson’s Valley Campaign of 1862. Nearby in Lexington is Gen. Stonewall Jackson’s gravesite. Virginia was largely the battlefield of the Civil War, and with Lynchburg being central much can be covered from one spot. Here is a list of U.S. Civil War battlefields in Virginia.

Wine tasting on the Bedford Wine Trail is near the D-Day Memorial located in Bedford. Many wineries surround Lynchburg with fruit-based wines predominating. 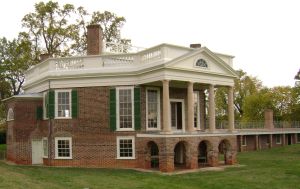 Thomas Jefferson’s getaway estate is between Lynchburg and Bedford; he called it Poplar Forest. At Poplar Forest the unique interests of Jefferson was built into the unique octagonal dwelling. He designed this home during his second term as President of the United States. Having seen Monticello, in my opinion, this is a less grand but an entirely Jefferson estate where one experiences Jefferson in relaxation. It is a National Historic Landmark.

This trip to the Shennadoa Valley and the Blue Ridge Mountains will take about five days minimum. Some of the activities mentioned can be coordinated for efficient travel time, but a hub-and-spoke approach out of Lynchburg is recommended. Stay in Lynchburg at the renovated Craddock Terry Hotel overlooking the James River, and enjoy the piano bar restaurant at Jimmy’s on the James offering southern American bistro fare.

Lynchburg is a memorable location for American history and enjoyment of the nation’s natural beauty. Please take the time to honor our veterans of D-Day and then partake of an American vacation at its best.