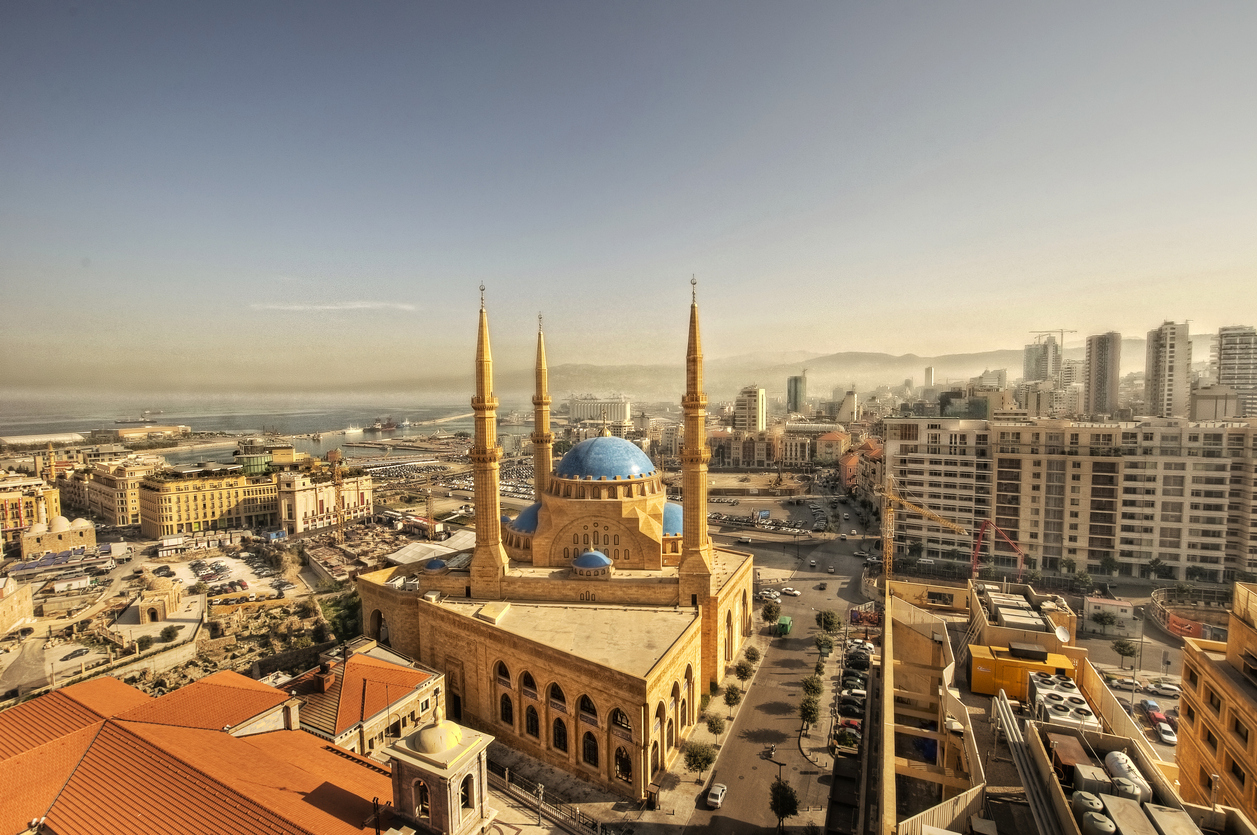 The tiny Arab country of Lebanon (not even three-quarters the size of the U.S. state of Connecticut) on the Mediterranean bordering Jordan, Syria, and Israel, has been in the news this week thanks to universal street protests - peaceful and held in a festive atmosphere - aimed at getting its corrupt ruling politicians to step down. Additionally, the little many Westerners have known about this country is outdated, from when it was convulsed from 1975 to 1990 by a brutal civil war as well as an invasion by Israel, causing large-scale destruction and loss of life. But this past summer, my husband and I decided to expand my travel horizons a bit outside our usual comfort zone. to visit a good friend from home while he was on a visit to his family here, and found it to be an extraordinary destination that more travelers should definitely consider once the protests have passed.

These days, long at peace, Lebanon does still live in a dicey neighborhood and is home to the militant, anti-Israel faction of Shi’ite Muslims called Hezbollah, but more than 40 percent of its population are Christians. And as we found this past summer, here Christians and Muslims coexist peacefully, and visitors will be not only safe and welcome, but amazed at the sophistication of capital Beirut (lauded in the 20th century as “the Paris of the Middle East” and arguably the same today); the friendliness of the Lebanese (quite a few of whom speak surprisingly good English); and the country’s wealth of history, culture, ecotourism, beaches, and other allures (even skiing!). If I may, allow me to take you on a quick  tour of its highlights. 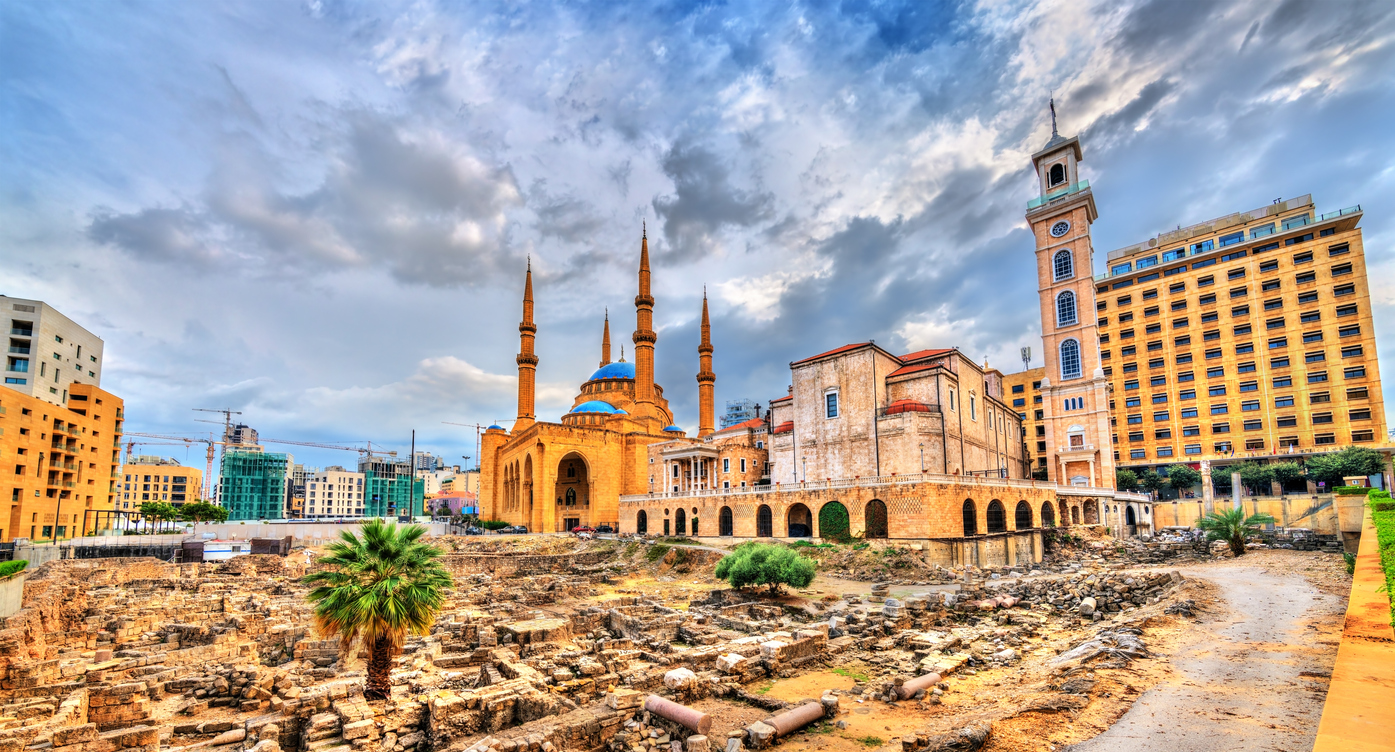 
With a greater metropolitan area home to 2.2 million out of Lebanon’s six million people, “Bey” is fast-paced, energetic, and exciting, with much of it showing little evidence of the war-torn past of decades ago (except if you look very closely, the occasional faded bullet holes pockmarking old façades).  Many of the monuments and cultural institutions most attractive to visitors can be found in its downtown Central District, also the starting point of a highly recommendable hop-on/hop-off double-decker bus tour. Fixed up, cleaned up, and glitzed up, in recent years, it’s become home to a glitzy mall called Beirut Souks, featuring Lebanese brands as well as all the big international luxury stalwarts as well as both casual and fine dining; one of its elements is a dramatically space-age department store I find reminiscent of Beijing’s Bird’s Nest Olympic Stadium and designed by the Arab world’s most famous architect, the late Zaha Hadid; it also hosts a Saturday-morning street-food market. But there are plenty of historic/cultural landmarks, as well, premier among them several notable churches and mosques. The current version built in 1772, the Greek Orthodox St. George’s Cathedral is the oldest extant church in Beirut, with a soaring vaulted interior adorned with brilliant Byzantine-style mosaics and a museum in the underground crypt showcasing finds from the original 5th century cathedral and beyond, back to the ancient Phoenicians.

Just nearby,  there’s another St. George Cathedral, this one Maronite (Eastern Catholic), which dates to the 1890s, its Neoclassical façade and interior modeled on the Santa Maria Maggiore Basilica in Rome; one of its highlights is an image of the eponymous saint by the 19th-century French painter Delacroix. Near both of these, the Ottoman-style, Sunni Muslim Mohammad Al-Amin Mosque (aka the Blue Mosque) is soaring and new, completed in 2008. For something much more historic, try the mid-16th-century Amir Assaf Mosque or the sandstone Grand Omari Mosque, originally a 12th-century Crusader church and Islamized nearly 200 years later. There are interesting Roman ruins here, too, of ancient Berytus. They include a public bath complex and a 3,000- sq m hippodrome with amphitheaters and a racetrack.

Topping the list of museum musts is the National Museum of Beirut, the largest archaeological collection (1,300 artifacts) in Lebanon and one of the largest in the Middle East, ranging from prehistory up to the Arab conquest and beyond (and the Phoenician sarcophagi I really dug – get it?). If you’re hungry for more, the Robert Mouawad Private Museum showcases the historic treasures (objects of antiquity plus others such as antique carpets and Chinese porcelain) of a wealthy,  early-20-century collector. On a more contemporary note, the decade-old Beirut Art Center (BAC) offers a look at the cutting edge of art both nationally and regionally in its rotating exhibitions.

There are actually a number of cool areas of town for hanging out with young Beirutis, especially after dark (let me tell you, Beirut nightlife rocks – even gay nightlife!), such as Gemmayzeh, parts of  Ashrafiyeh, and Hamra Street, with an added bonus at this last its proximity to the American University of Beirut. https://www.aub.edu.lb/ Founded by U.S. Protestant missionaries way back in 1866,  AUB is now one of the Middle East’s most prestigious universities. Have a look (and maybe even take a tour) around its leafy and surprisingly large campus – totally an oasis of academic Americana! – and check out its very good archaeological and natural history museums. You’ll also not want to leave town  without taking a spin along the Corniche, the three-mile, French-colonial-era seaside promenade, lined with fancy cafés along with an iconic natural landmark, Pigeon’s Rocks, a pair of massive formations jutting nearly 90 feet out of the sea just offshore. If you’re lucky as I was you’ll spot young cliff divers flinging themselves into the water – in addition to that, my heart was in my throat watching one young man walking and even sitting down on a tightrope between the two.

One caveat. My friend drove us through a couple of the Shi’ite neighborhoods of Beirut; they’re not dangerous but they do tend to be more run down, and lack anything of particular interest to visitors; for an idea, you might want to check out the gritty, 2018 Oscar-nominated film Capernaum. 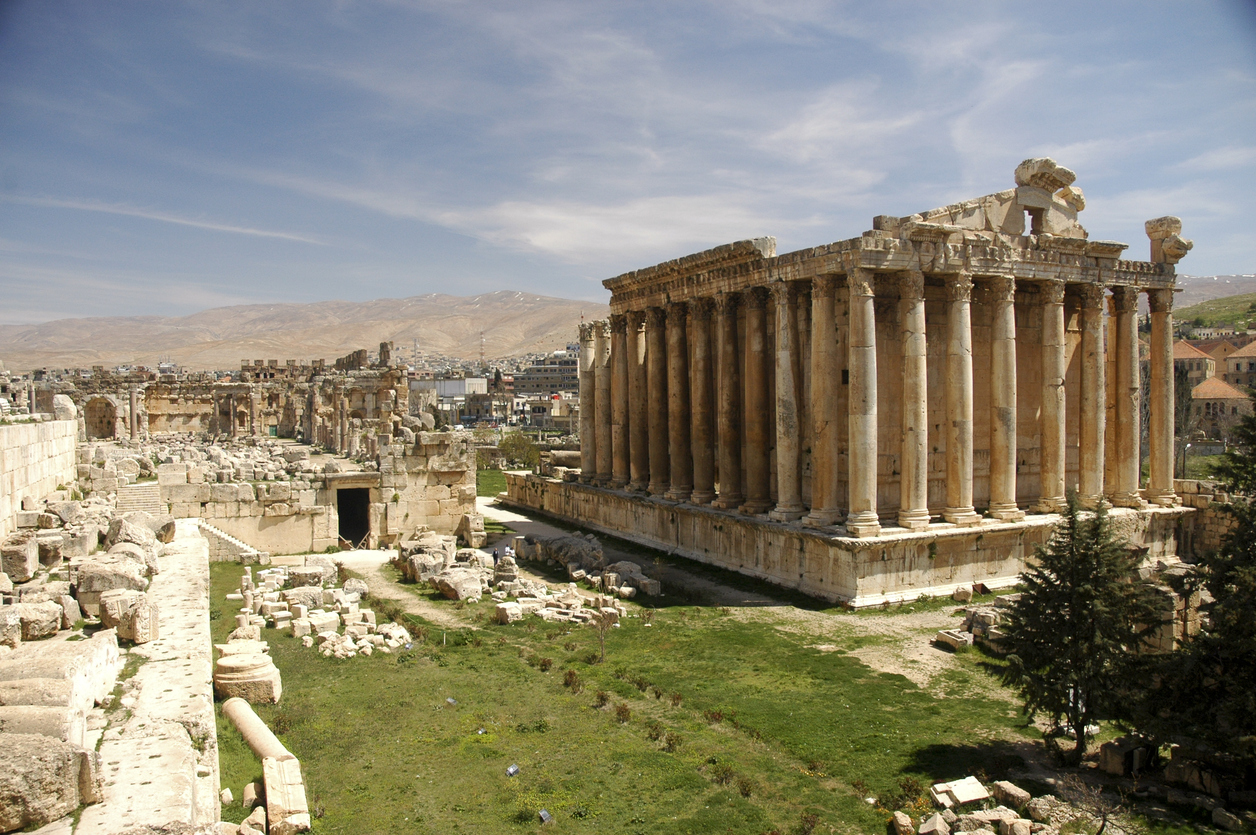 
I’ve been to my share of Roman ruins throughout Italy and the rest of Europe, but other than Rome itself, the UNESCO World Heritage Site of Baalbek takes the baklava as the most spectacular. Located in eastern Lebanon’s Bekaa Valley just over an hour’s ride northeast of Beirut, the country’s most important farming region and settled for 5,000 years, its name dates to the ancient Phoenicians, whose main god was Baal, and later in the 1st century BCE under the Romans it became the city of Heliopolis. The remains of their magnificent temple complex, with its temples of Jupiter, Venus, and Bacchus are nothing short of jawdropping.  Other noteworthy spots in the valley include the less spectacular but still fascinating 8th-century Ummayad Islamic ruins of Anjar and vineyards such as 162-year-old Château Ksara. (One note re security: Because the Bekaa is a Hezbollah stronghold and near the Syrian border, the U.S. State Department currently has an advisory against travel here, but as in many cases, it’s alarmist and unwarranted. It felt safe and perfectly normal – the first thing we spotted in the valley’s first town was a McDonald’s with a kiddie play area!) 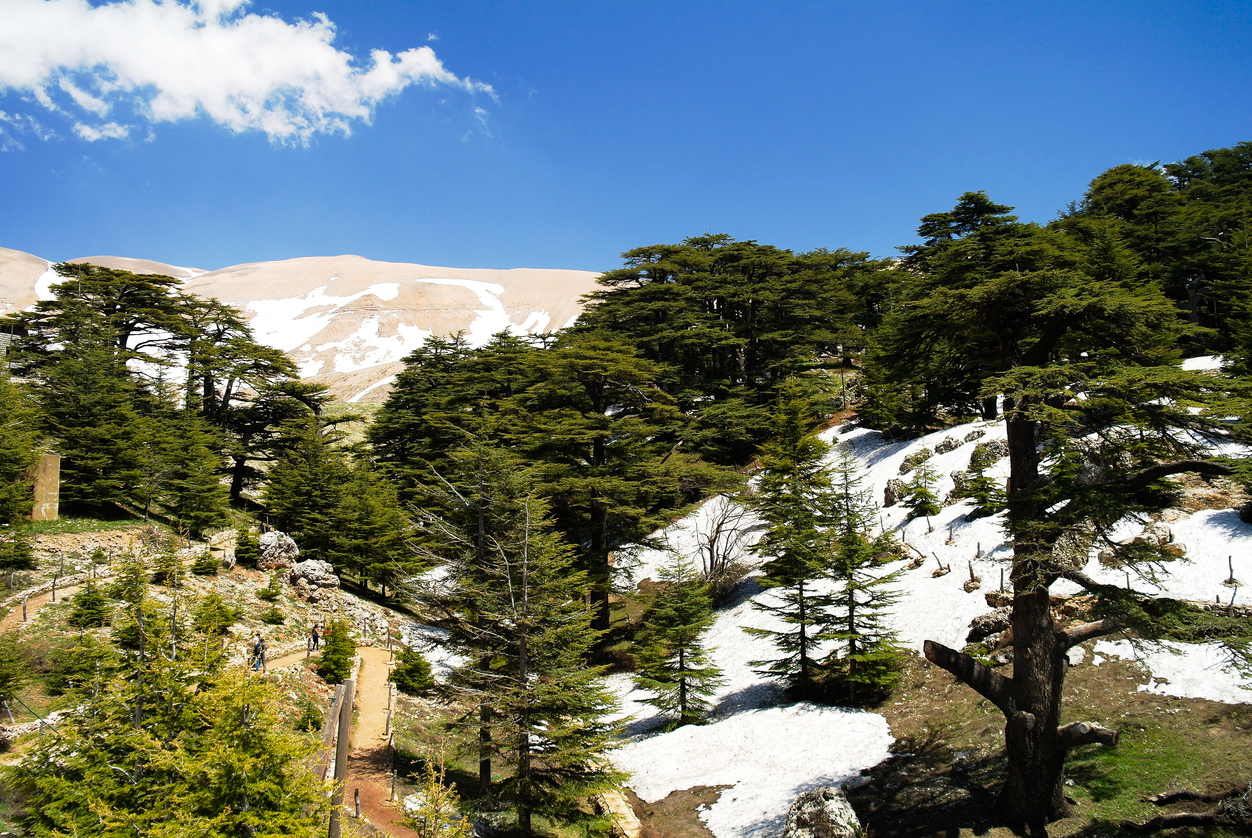 On the eco side, “the cedars of Lebanon” may ring a bell – they’re so identified with this country that one is depicted on its national flag. And the north is home to a number of cedar forests, including nature reserves such as Shouf Biosphere Reserve, where you can hike and spot wildlife including wolves, gazelles, porcupine and wild board amid cool temperatures and majestic evergreens, some towering more than 100 feet and measuring more than 45 feet around. Another, smaller reserve is the Qadisha Valley’s UNESCO World Heritage Arz el Rab (Cedars of God, above), with the country’s oldest cedrus libani - up to 2,000 years old.

There’s plenty more still – such as more historic treasures dating back to antiquity; marvelous sandy beaches; adventure sports such as paragliding; and a half dozen fine ski resorts, with peaks ranging up to more than 8,000 feet. Truly amazing for a country this size, and I’m already planning a trip back! For more information, check out ComeToLebanon.com and a tour operator I particularly like, Show Me Lebanon.