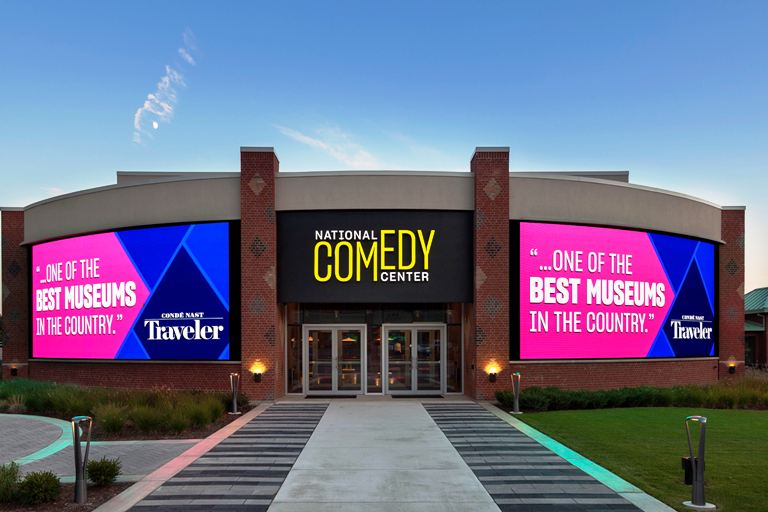 How many places do you walk into laughing? Flashes of comedic movies, TV shows and stand-ups assault your inner comedian as you enter the National Comedy Center and you feel one with a larger-than-life Rodney Dangerfield. Then a sign comes on reminding you to wash your hands – and you stop laughing – but just for a moment. Instead of the pre-COVID wristband, you get a card that provides interactive capability during the virus and a stylus allowing you to touch screens.  And you allow yourself to start laughing again. 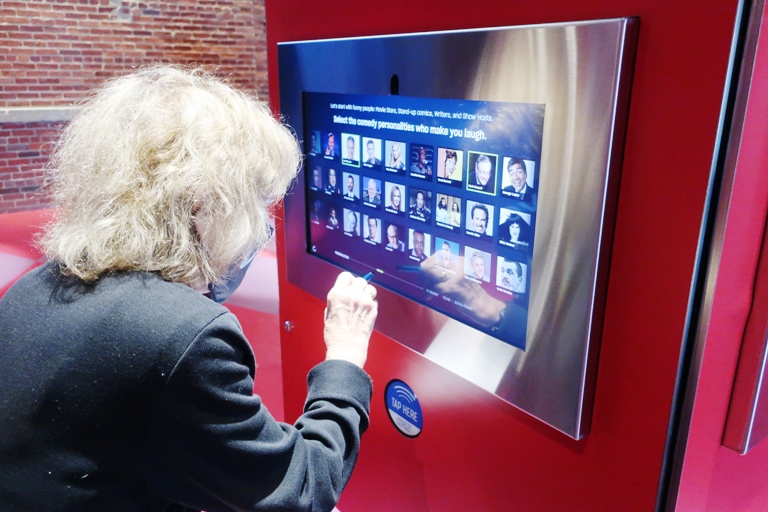 The National Comedy Center began as a long-ago vision of the legendary Lucy – a home-grown Jamestown girl,  born, bred, and buried – for her hometown to become a destination for the celebration of comedy. Still, it didn’t actually open until 2018. Her own much-older museum is just down the street – but more on that later.

First I had to personalize my comedy experience by picking my favorite comedians, TV shows and films (above), from Cary Grant to Stephen Colbert, All in the Family to Modern Family, the Marx Brothers to Bridesmaids. They lost me at podcasts, but turns out my humor runs toward political satire, wry, sophisticated, and observational. My husband took issue with the sophisticated designation. 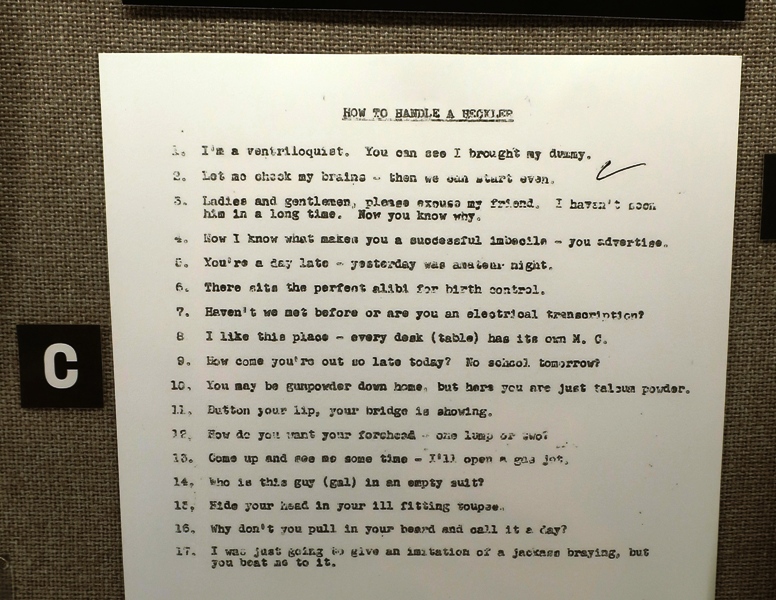 The museum emphasizes comedy as an art form and illustrates everything that goes into the craft of comedy from inception to production to execution. A sample of Dangerfield’s handwritten notes has him telling the audience: “What a crowd! What a crowd!” I didn’t want to know that. Joan Rivers had her own preparation notes, such as "How to Handle a Heckler"  (above) - okay, so no taking any chances there. Lots of iconic outfits also dot the museum, including Jerry Seinfeld’s puffy shirt, Phyllis Diller’s huge ball gown, and Carol Burnett’s wacky characters’ zany fashion statements.

One exhibit is devoted to all things George Carlin; another to late-night hosts from Steve Allen to Seth Myers; another to When Harry Met Sally, featuring two of the most memorable movie scenes ever. 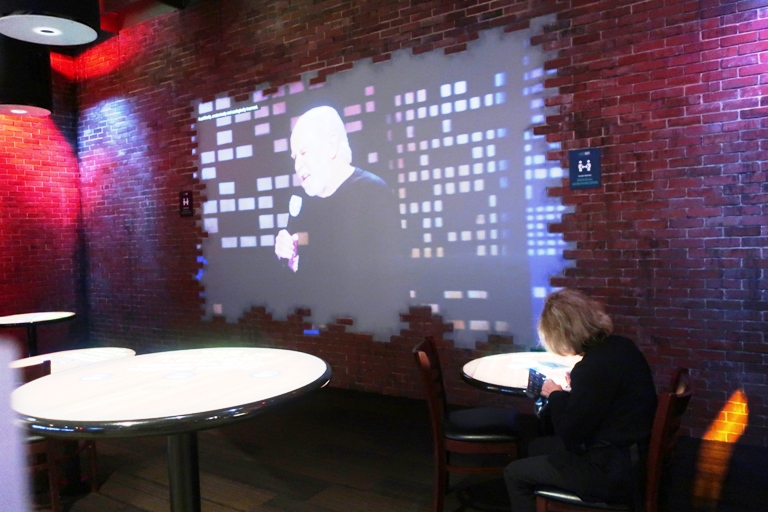 In the stand-up comedy lounge (above), I got to sit in to view some of my favorite comedians from my initial sense-of-humor profile. I actually looked around for a bartender to take my drink order. A different lounge presented clips from my favorite TV shows. 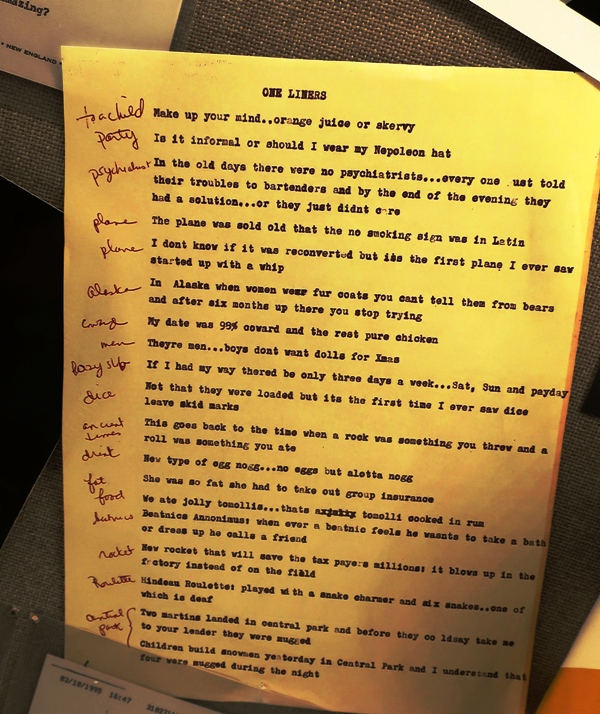 Passing from one exhibit to another takes you down a hallway of one-liners. At this point you just can’t stop laughing, and you may never make it to the end. There’s an academic exhibit which chronicles the history of comedy from the Greeks to vaudeville to the Internet. Lest you find that a tad too serious, when you sit on the adjoining bench, what do you think happens? Yes, of course. The bench farts! 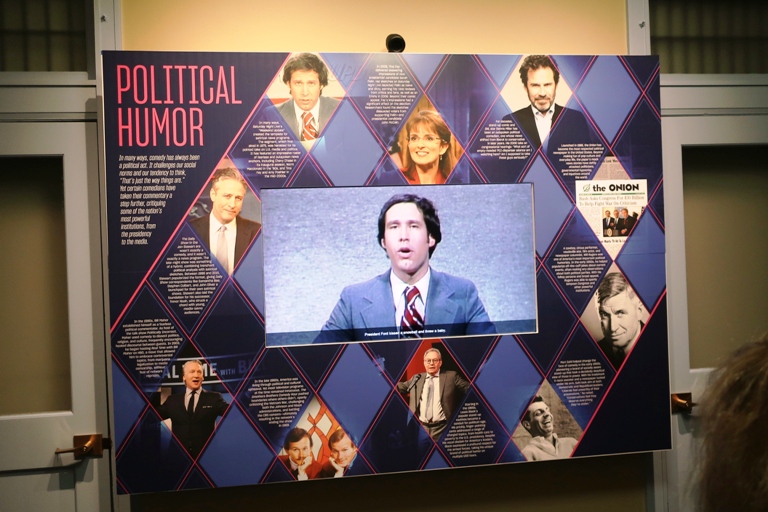 There are scripts where improvised changes that were made during shooting remained on camera; there is the history of radio from Jack Benny to Howard Stern; and then there is the age-restricted raunchy “Blue Room” for the likes of Lenny Bruce to Wanda Sykes. Everything tells a story of how a joke goes from page to stage, the long grind from comedic inception to commercial success. And it’s all funny! Lucille Ball of course makes an appearanceat the National Comedy Center, but to dig deep into this groundbreaking comedic icon, head to the museum down the street. Growing up, I, like millions of Americans throughout the 50s, laughed with and at Lucy and Ricky Ricardo. The I Love Lucy Show was must-see TV. I liked her – I didn’t love her – but her iconic show no doubt laid the foundation for situation comedies for decades to come. Having a museum of her own in her hometown seemed like a fitting testament. 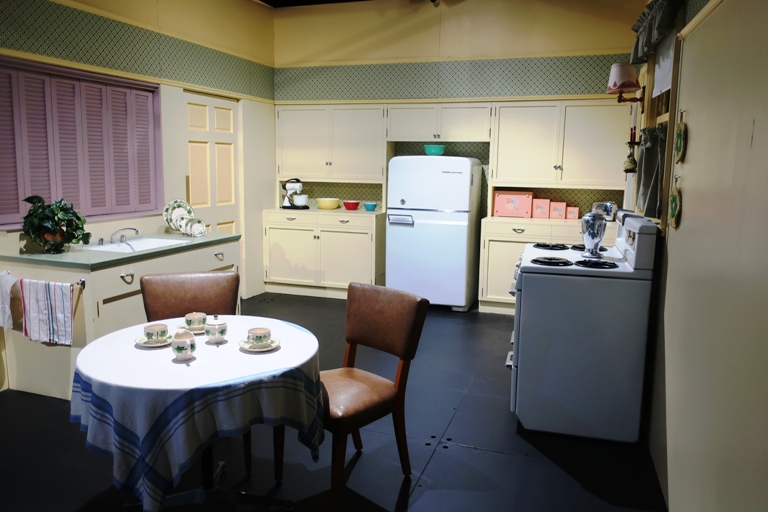 The Lucy Desi Museum, while special in its own right, is static by comparison to the Comedy Center. Most of the visuals are behind glass enclosures and I kept looking for something to scan. The West Gallery is devoted to Lucy and Desi, their relationship, their family; the East Gallery, to their show and set (above), with replicas of all the rooms of the Ricardos' second apartment. Any fan would feel transported back in time and right into the studio in which their show was shot.

For a Lucille Ball fan, this would be a tiny bit of heaven. Since I was more socially distanced (in every sense of the word), I just was sorry to read that Lucy and Desi got divorced the day after the last show aired in 1961. After four hours steeped in laughter, I left feeling sad. That just seemed wrong, so I headed back to the Comedy Center. Problem solved.

Traveling on to Watkins Glen and the Thousand Islands as part of the Empire State Road Trip will be covered in future articles. For more information call (607) 535-3759 or for more details on this itinerary, log onto HarborHotelCollection.com/Experiences/Empire-State-Road-Trip. And for more info on other attractions in Chatauqua County, where Jamestown is located, check out TourChatauqua.com.