You may have heard that my hometown (and Oregon's biggest city, with 500,000 people and 1.6 million in the metro area) has more than a whiff of cool about it these days. True enough, but what I like even more -- and what clinches the deal for many visitors -- is its scenery, greenery, and water everywhere, in fountains, rivers, lakes, and ponds. Fall foliage season is, to my taste, the most beautiful time to visit, though to yours it may be springtime, when our famous flowers are absolutely riotous. Yes, we do get 200 days of rain annually (FYI: you're more likely to experience them November throught April).

But what most draws folks here? Not grand monuments and museums (though we do have some pretty good ones, devoted to fine art, kids, science and industry, history, crafts, and, this being the Pacific Northwest, forestry). More than anything, though, it's that Portland is such a great place to hang out -- experiencing the parks, gardens, festivals, and multi-culti neighborhoods with their hopping nightlife, foodie, brewpub, indie music, and gay scenes -- along with the spectacular nature that surrounds us. (Keep in mind, too, that a visit here doesn't have to be a budget buster.)

The Many Parks of Portland 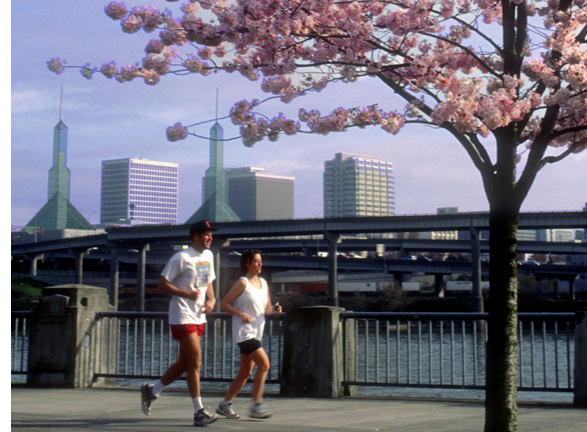 For starters, parks and gardens are everywhere. Downtown, the most popular is Tom McCall Waterfront Park, running along the west side of the Willamette River for over two miles (it's a summer festival hotspot for the likes of the Dragon Boat Races and my favorite, the Safeway Waterfront Blues Festival). In the West Hills above town, you can stroll roughly 100 of rose gardens at Washington Park with more than 8,000 roses, including some you've never seen before (did I mention that Portland's dubbed the "City of Roses"?). I also love meditative walks through the serene and beautiful Japanese Garden (some say it's the best of its kind in North America) and the Portland Classical Chinese Garden. Horticulture lovers will also want to check out the lovely Berry Botanic Garden, Crystal Springs Rhododendron Garden, and Elk Rock Garden.

And it's all fairly compact and easy to get around, whether on foot, bike, bus, light rail or streetcar (cheap, too -- within a 340-block “Fareless Square,” everybody rides free, and MAX light rail and streetcar fares to other parts of town are very reasonable). Really, though, it's two-wheeling that has pride of place -- Portland's one of America's top-rated biking cities, and almost every street has a dedicated cycling lane. Some hotels offer loaners, or you can rent at shops like downtown's Waterfront Bicycles (from $28 for a half-day; tours also available). Explore the views and paths on both sides of the Willamette, or if you're up for a challenge, head up, up, up to Rocky Butte's Joseph Wood Hill Park for stunning 360° views.

You'll want to set aside time for a couple of day trips. It's just 90 minutes by car out to the Oregon coast and an hour to majestic Mount Hood, while 45 minutes east on Interstate 84 and you're in the Columbia Gorge National Scenic Area, a geologic wonder of towering cliffs, stunning views and waterfalls including the 620-foot Multnomah Falls. Meander south through Washington and Yamhill counties and you'll find yourself in some of America's best wine country.

Peruse myriad choices at all price points at TravelPortland.com and PortlandMonthlyMag.com. Let me just say that the past decade has wrought radical improvements. You'll find all the main hotel chains here, of course, along with several great independents. One is a really cool "new" place right in the heart of downtown Portland: the Ace Hotel on SW Stark Street. Made famous by Gus Van Sant's film Drugstore Cowboy, this dingy old thing has been completely re-vamped, with hand-painted murals in every room and record players in the suites. Shared-bath singles start at $95 per night and standard doubles at $140. For a delightful and affordable B&B experience in the historic Irvington district, the Blue Plum Inn starts at $94 a night.

The organic and seasonal produce movements, meanwhile, have revolutionized the dining scene. One of my faves is David Machado's Lauro Mediterreanean Kitchen, a casual East Side bistro with an early-bird special between 5 and 6 p.m. daily, when the yummy cheeseburger, calamari, and daily pizza go for less than $10 (washed down with a glass of local Chardonnay or grenache for just $4). The streets in and around downtown have also become known for their more than 400 sidewalk food carts dispensing goodies of many lands around lunchtime, often for $7 or less per person. One of my favorites is Kevin Sandri's Garden State Cart, in a lot at SE 13th and Lexington, whose Italian fare is better than some restaurants' (Kevin's Sicilian arrancini, breaded and lightly fried risotto rice balls stuffed with cheese or meat sauce, are a revelation).

You know, it can be easy for travel journalists to get jaded about their hometowns. But while roaming around working on my recent book of Portland photography, I uncovered so much more about mine, and I still continue to do so practically every week. And while many Americans may not think of us first, second, or even third when it comes to their next vacation destination, give us a whirl -- you'll be pleased indeed.