The concept isn’t new, of course. For generations, the Inuit of North America have been building their igloos from snow and ice, and those who like to do their thing in winter mountains often learn to ‘snowhole’. The technique is also used by soldiers who train for Arctic warfare. And, I can tell you that, given a reasonable sleeping bag, ‘snowholing’ is quite tolerable, if not exactly the last word in comfort.

The idea for the ‘ice hotel’ really took off when it was taken on board that people were prepared to pay to stay the night in them. Ice hotels began to appear all over Scandinavia … indeed, anywhere else where there’s substantial snow in Winter. We were due to visit one in Helsinki while on a Baltic cruise in November, but our ship was unable to dock because of the weather.

So, our initiation into ice hotels came a couple of months later, when we had a chance to visit what’s probably the northernmost one there is; the Sorrisniva Igloo Hotel near Alta, in Norway. Guests, who rarely stay for more than one night, sleep on reindeer hides in chambers cut out from the snow. We weren’t even staying one night; just visiting, but still enjoyed the experience … it was vaguely reminiscent of the ‘Fortress of Solitude’ in ‘Superman’ … and it was cold 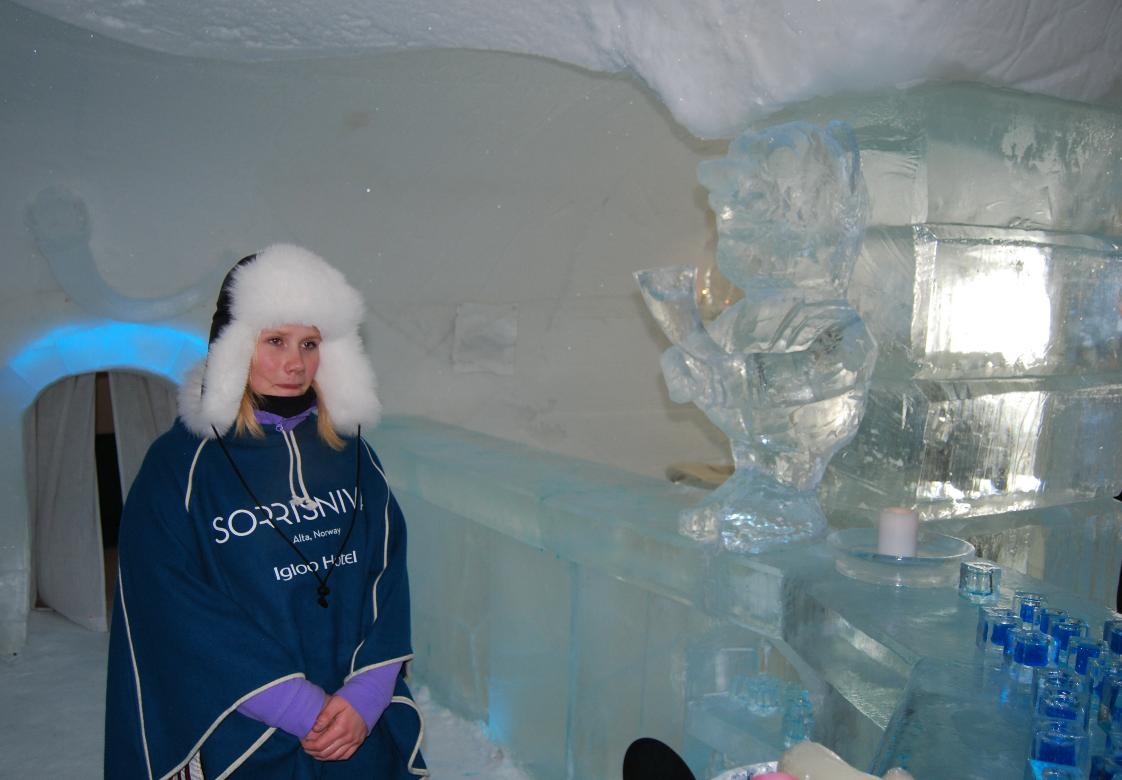 The staff were bundled up in heavy-duty ponchos and furry hats with earflaps … but, people have been known to spend their honeymoon here! Among the rooms is an ice chapel, which is consecrated, and licenced for weddings. In fact, a couple had just got married here, but chose to have the reception in the warm, in a nearby wooden building. But, the bridal suite, complete with fire, awaited them back at the ice hotel.

Of course, in so extensive a structure, the roof needs to be supported, and this is done with … what else? … ice blocks. And, of course, there has to be some form of decoration or otherwise, it would just be a large ice cave. So, everywhere, there are beautiful ice sculptures. I’m always especially in awe of the painstaking process of creating these, for they don’t last beyond the first thaw.

There’s a corner of the hotel which sells souvenirs … mainly clothing made from reindeer hide and jewellery crafted from reindeer antlers.

And, of course, like any good hotel, there’s a bar. Here, we were served a drink; a blue, Curacao-based cocktail, served in glasses made of ice … which they said we could keep, with their compliments!