Driving into Newfane, Vermont means you're visiting an authentic village in the Green Mountain State. This isn't a ski mountain town or a faux village artificially inflated with outside money. This is a town with a working storefront grocery store, white clapboarded church, and meeting house flanked by historic homes surrounding the town green. Walking the village takes no more than 15 minutes but its character and scenic charm is undeniable. Residents stack firewood, do their own home improvements, and in many cases run their own small businesses. Immersed in this scene with the public library right next door is stately Four Columns Inn. A fixture in its own right, this circa 1832 Federal-style farm house opened as an inn in 1965, attracting high profile guests like Mick Jagger, Michael Douglas, and Sting. 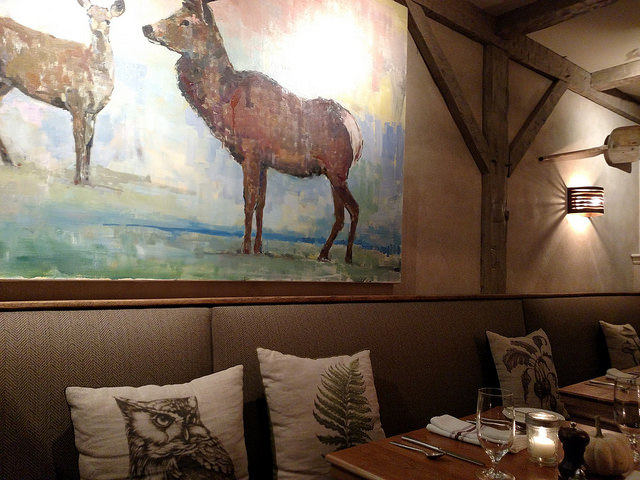 Posh enough to accommodate the culturally sophisticated, yet defined by local authenticity, Four Columns Inn stayed true to its roots with a farm-to-table restaurant long before the phrase was ever used - even preceding the legendary Alice Waters by four years. The pond out back was stocked with trout, the garden seasonally supplied the kitchen with vegetables and herbs, chickens and pigs were raised onsite and game birds were sourced from local hunters. Four Columns had quite the run until the original owners sold in 1981. Things began to deteriorate as the property changed owners several times before closing its doors and swiftly hitting the auction block in 2013.

Charles Mallory, founder and CEO of Connecticut-based Delamar Hotels, came to the rescue, restoring the property to its original grandeur. The process began with gutting the interior down to its original beams and wide board flooring. Next, the overall configuration, walls, and fixtures were reconstructed to lavishly appoint all 16 spacious guest rooms with oversize bathrooms, soaking tubs, fireplaces, and centralized HVAC. As a crowning touch, all walls throughout the inn showcase original New England paintings from a personally curated collection. "We wanted to maintain and further enhance everything that people loved about this oasis of tranquility and luxury just steps away from the village green," says Mallory.

And this most definitely includes Four Columns' dining experience as well. Building on the popularity of its sister Artisan restaurant at Delmar Southport in Connecticut, helmed by chef Frederic Kieffer, Mallory built the same Select Registry experience into Four Columns Inn with a fire placed dining room opening up onto a patio. The original tavern remains tucked around the corner to the back of the property with craft made cocktails, and a rotating lineup of five local beers and ciders on tap. The tavern menu features small plates like venison sliders and almond chicken fingers, while the main menu features New American fusion dishes using ingredients from long established local sources, like chittara pasta and braised West Haven, Vermont rabbit and crispy-skin duck that pair nicely with their Wine Spectator-award-winning wine list.

How you experience the great outdoors at Four Columns Inn depends on whether you step out the front or back door. To the front is village life, while the back features a terrace leading to a back yard with a pond, seasonal in-ground pool, and swift moving Smith Brook. Cross it and you have access to 138 acres interconnected with hiking and snow shoe trails. Other onsite amenities sure to kick up the relaxation factor include a wellness center and spa with a European-style steam room, bonfires with cocoa & s’mores every night during winter, and summer movies on the lawn.