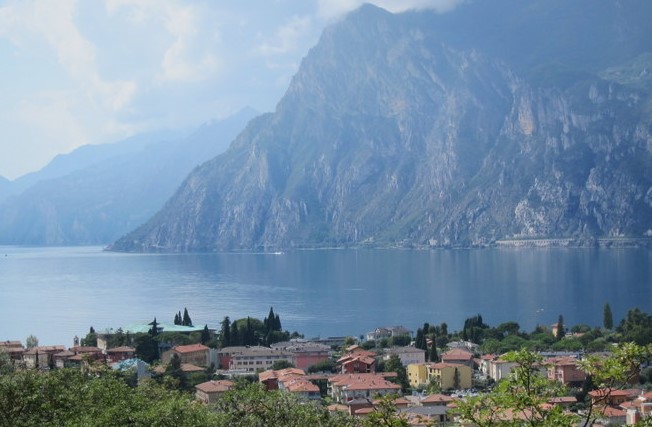 We began this adventure by purchasing a Porsche Macan S and picking the car up at the Porsche factory in Zuffenhausen Germany. This is our “official” inaugural road trip, and this segment of the series is dedicated to our adventures while touring the Lago di Garda area in the lake country of northern Italy.

The Drive from Bolzano to Lago di Garda

We departed Bolzano for a two and a half hour straight-shot drive to Lago di Garda.  About an hour out we approached a major decision point and road juncture. The autostrada turned into a spaghetti bowl kind of interchange that provided routing to Milan, Verona, Trento, Bologna and Venice as well as dozens of other smaller cities.

As we approached this juncture our primary GPS just goes up and dies so we pull off to the side of the roadway and go to Plan B… our backup GPS, which was provided by Porsche.

OK… who knows how to even turn it on or, better yet, how to program it?

Let’s go to Plan C:  the backup map pages we used to originally prep for the trip months ago at home.  What do you mean the page we need is missing?

Let’s go to Plan D:  Google Maps on the cell phone.  What? No cell connectivity?

We both looked at each other and quoted a famous movie line… something like…“What should we do now?   PANIC."

After a good laugh, we continued to head south.  And as we were driving along, the primary GPS miraculously came back to life and we were actually on the right road!  Our travel angels had enough amusement, so they cut us a break.

Lago di Garda is the largest lake in Italy, and is about 31 miles long and 12 miles wide.  The 99-mile shoreline surrounds a lake that has a surface area of about 143 square miles. "Huge" is an understatement.

Special Moments in a Tunnel

As we navigated the narrow roads through tunnel after tunnel along the shoreline of Lago di Garda, we noticed how little room we had, causing some amount of stress.  This stress was coming to a head as a big truck with a square roof was heading toward us in a tunnel with a round ceiling.  Hey - he is now straddling the center stripe and driving on our side of the road!

This is going to be close. Hhow do you fold in the mirrors to gain a little space?  What button do you push?  Where is the owner’s manual?  We moved as far right as possible and braced for the possible impact… bye-bye nice new car!  Maybe just a mirror?

We took a deep breath and grit our teeth. Once again the invisible force field that surrounds this car - and our travel angels - came through as the truck passed inches, seriously, just inches away.

One of Garda’s most famous residents was the fascist dictator Benito Mussolini, who lived near the town of Gargnano.  Mussolini’s personal residence and headquarters were established in the confiscated Villa Feltrinelli, situated directly on the lake shore with an expansive view of the lake and mountains.

The villa was returned to the Feltrinelli family after World War  II, eventually changed hands, and in the 1990’s it became the Grand Hotel Villa Feltrinelli.  You can live like Mussolini for the starting price of $1,500 per night.

We opted for a wonderful bed and breakfast on the hillside overlooking the town of Gardone Riviera.  This 15th-century guest house is situated in a 20-acre park with stunning views of the lake.  We even had covered parking next to a vintage Morgan.

The Hotel Dimora Bolsone is owned and managed by a charming gentlemen by the name of Raffaele.  He was assisted by the very attentive and friendly Jessica and the delightful Sabrina.  They represent the true essence of Italian hospitality, and provided us with a wealth of local knowledge.

We really lucked out…when we made our reservation we did not realize that the B&B was an agriturismo property. As such, they are required to produce at least 40 percent of everything they serve their guests from their land…we enjoyed their vegetables, herbs, eggs, wine, olive oil, balsamic vinegar, chickens, rabbits, and pigs - all adding a real meaning to the words “farm fresh.”

Our Breakfast Table with a View

All of the meals were perfectly prepared and the presentation was excellent.  And you could split any of the entrees allowing us the opportunity to taste new delicacies and not overdo it.

A few of our favorite things

When we planned this trip we had no idea who Gabriele D’Annunzio was or his connection to Gardone Riviera.  But all that changed after our visit to his residence- turned-museum that he named the “Vittoriale degli Italiani (The Shrine of Italian Victories)”.

This hillside estate was the home of the famous Italian politician, war hero, and charismatic leader.  As a true “Renaissance Man” he was an artist, poet, journalist, playwright and one of Italy’s most popular, as well as controversial, writers of the 20th Century.

As a warrior he became a legend due to his daring and bold actions.  When he returned from the war he was an international hero and had been awarded a gold medal, five silver, a bronze, and the officer’s cross of the Savoy Military Order.  He even got the Military Cross from Britain.  All are on display in the museum and the tour was fantastic.

We are now in full relaxed mode and travel induced stress has faded away… or is it the wine?

We want to introduce a series format change to focus on special side trips at a destination.

Please follow us in the next article: "Exit Ahead  --  Exploring the Roman Ruins of Lago di Garda."

After all, what is the hurry… be inspired.