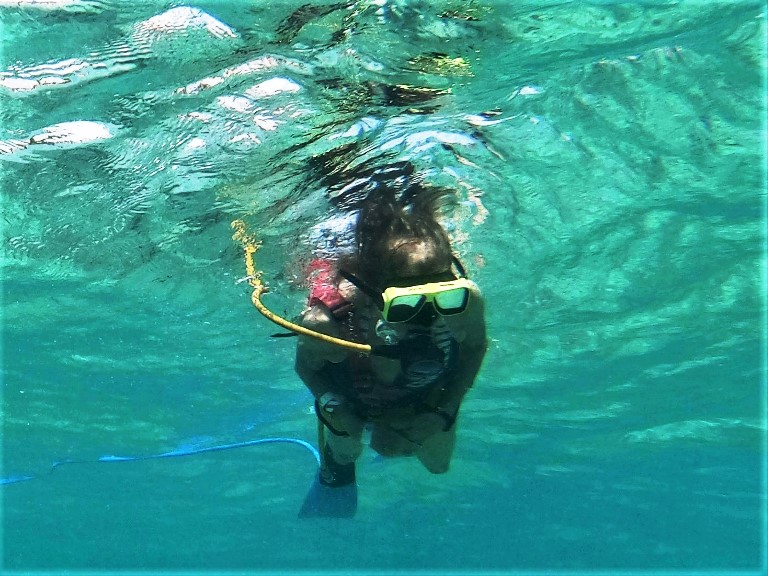 I’ve always envied my scuba-diving friends who describe their magical underwater world full of coral reefs and colorful fish. I’ve snorkeled aplenty but it’s not quite the same. Now, although I remain uncertified as a diver, I have an idea of what the majesty is all about thanks to my SNUBA experience at De Palm Island, an islet just down the coast from Aruba's capital Oranjestad.

For the uninitiated, SNUBA is a cross between SNorkeling and scUBA. Unencumbered by the heavy accoutrements of scuba divers who have air tanks on their back allowing them to access 60 feet below the surface, SNUBA participants simply have fins and a mask similar to snorkelers but which is attached to an outside oxygen supply, such as a raft floating on the surface, that allows them to dive 10-20 feet underwater and see way more than is usually accessible to the average snorkeler. 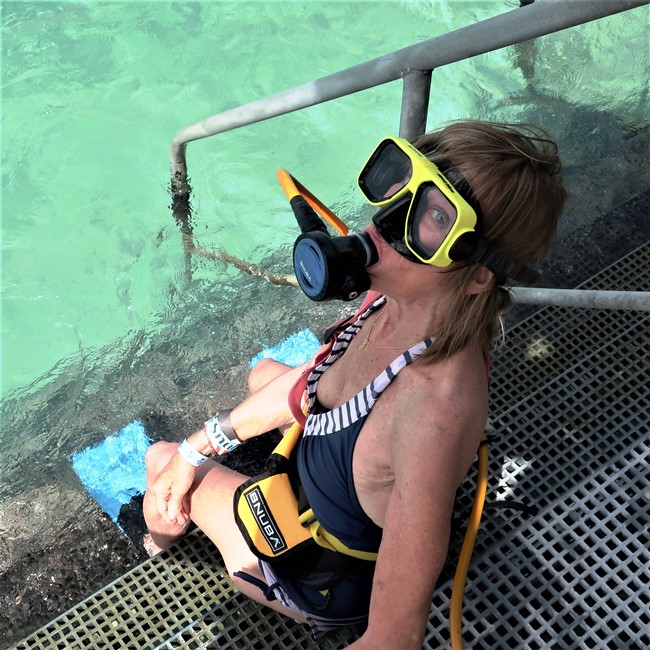 Me preparing for my SNUBA adventure; photo by Victor Block

So I was able to get up close and personal with the magnificent coralscape and the many multi-colored residents who call it home. Trigger fish, trumpets, sergeant major fish, blue parrots, butterfly fish - “the list is so long it would take me a whole day to tell you,” my instructor claimed. At one point he directed me to the bottom to look underneath a big coral formation where a puffer fish was hiding. You can’t do that just snorkeling! 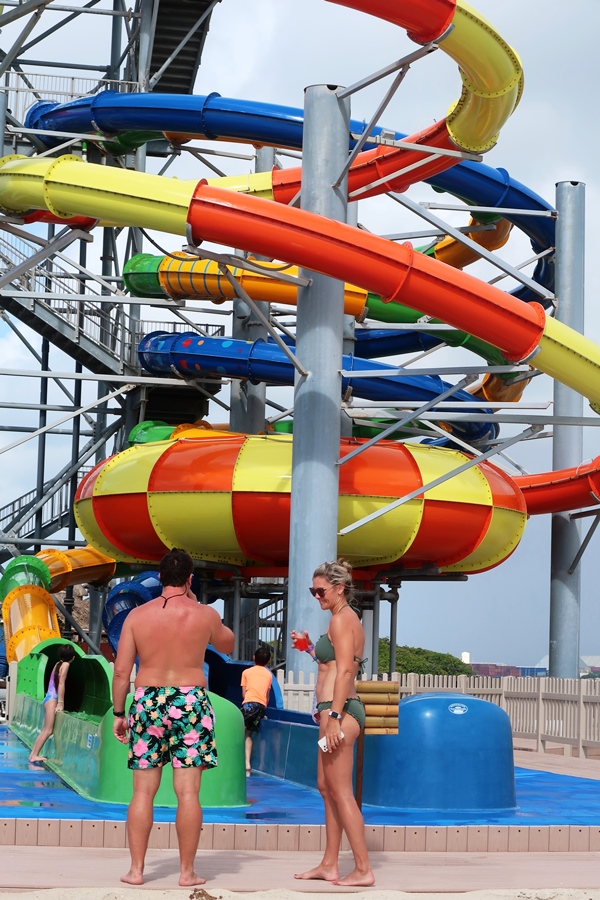 And that barely touches the surface – so to speak – of what De Palm Island has to offer as an all-inclusive day trip (around seven hours long) a five-minute ferry ride away – but worlds away in terms of excitement. First let’s deal with the basics: $109 per adult buys you unlimited snorkeling tours with free snorkel gear; an impressive water park including exhilarating water slides; banana boat rides galore; as much food and drink as you can handle - and of course salsa lessons (didn't see that coming, did you?). Plus oh yes, a variety of sandy beaches with chaise lounges and palapas to relax upon if you can find the time. 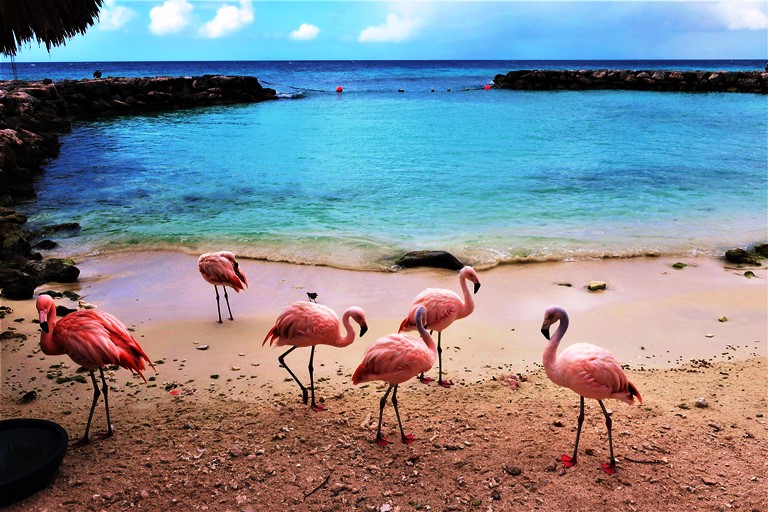 And as an extra-cool bonus, flamingos! Usually in the Caribbean you see a lot of them, but they’re usually in the form of mailboxes, lawn decorations, or home décor.  On De Palm a bevy of these stately, pretty, light pink, long-legged birds roam their own sandy habitat at their leisure for you to interact with at yours. 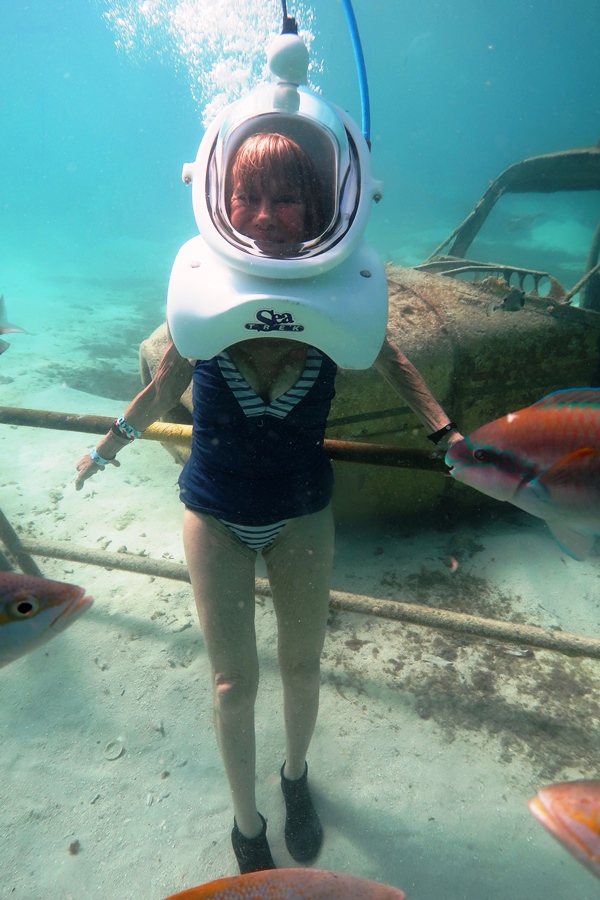 
Not only does De Palm Island offer SNUBA - of which there are only about 56 operations worldwide - but also Sea Trek, which has the same number of operations around the globe, but to have them both in the same place is rare indeed. So what is Sea Trek, you ask? It involves donning a big helmet with beathing apparatus and walking along the bottom 10 to 15 feet down, always following certain caveats – remain vertical at all time, walk and breathe, yawn to equalize pressure, hold on to hand rails, and never look down.

No flapping flippers or snorkel mask constantly filling with water. Here you just have to focus on the multitudes of fish swarming around you. Admittedly the thought of a 72-pound helmet on my 90-pound frame initially sounded a little daunting, but once in the water it was very manageable – even if the diver-guide had to keep re-adjusting it to fit my face. 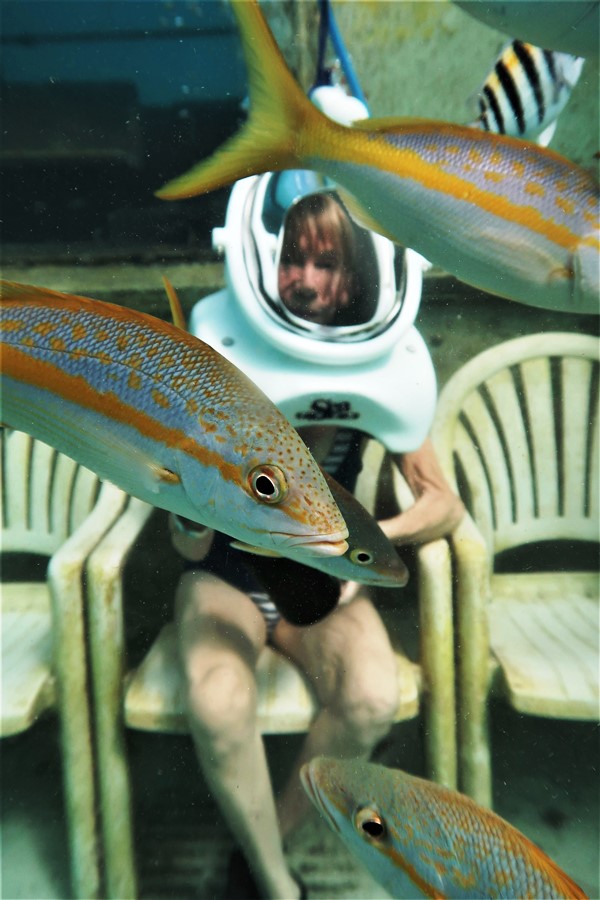 Okay, so the divers accompanying our small group were spreading food everywhere we went, but still – I was petting fish. Lots of fish. Yellowtail snapper, blue parrot, sergeant major, filefish, grouper, sea cucumber, sea star, sea urchin, damsel fish – not that I could actually identify any of them.

And of course a video was taken to be offered us for sale later, and for the sake of said video, we had to pretend to drink a bottle of wine and pretend to drive an underwater vehicle. Also to actually stroke a sea cucumber and a very scaly sea star. But I was in it for the fish – and at times there were so many of them, I felt an integral part of their school (which I'm sure was far more rewarding for me than the fish). 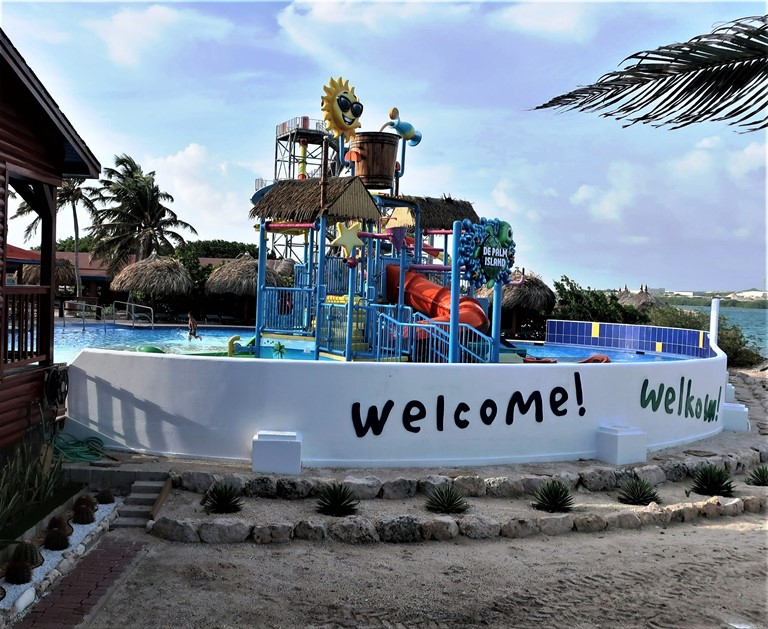 Along with the SNUBA and Sea Trek add-ons, you can also opt for a well-stocked private cabana, a back or foot massage, a DIY craft shop or a henna tattoo, but the pick-up basketball game is free as is so much else. The kids waterpark with age-appropriate slides and the ever-present bucket of water on high that spills over at unexpected intervals elicited the de rigueur squeals of joy every time. A number of snorkeling areas consistently populated by bouncing snorkel-masked heads that once would have beckoned me had I not just experienced other fish-enhanced realms of a much higher order. And the always inviting chaise lounges which let you peacefully lay and listen to the surf hitting the rocks – sheer heaven!


In short, De Palm Island one of the coolest sources of entertainment both below and above water imaginable. For more information visit DePalmIsland.com.