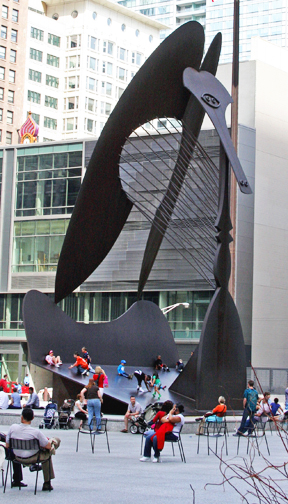 Scattered throughout Chicago, Illinois is evidence of creative minds at play: more than 700 pieces of public art. Although local artists get the most commissions, some of the biggest names in modern art — Picasso, Chagall, Calder, Miro -- have also made their mark here, turning “The City That Works” into a world-class museum of modern sculpture. Even better, this museum charges no admission and its works earn the appreciation of not just art experts, but everyone from toddlers to retirees.

Moreover, it will continue to grow. The Percent for Art Ordinance, passed in 1978, requires all the construction budgets of public buildings and spaces to set aside 1.33% of expenses for artwork. In 1999 officials created another fund to maintain the Chicago's outdoor art collection, which is further fattened by private-sector donations. Of the 100-plus public art projects downtown, these are among my favorites:

Chicago Picasso, aka "The Picasso," 50 W. Washington St. The 50-foot-tall sculpture in Daley Plaza (above right) looks like a baboon, lion, or long-necked woman – depending upon who’s doing the critique. Good. Art should be subject to interpretation.

People yelped in disgust when the steel “monstrosity” was unveiled in 1967, but now it’s one of Chicago's most beloved icons, situated where people gather for all sorts of events, from concerts to Christkindlmarkts
(Christmas markets). Kids climb the Picasso and turn the base into a slide. Every once in a while the sculpture gets a big Cubs or White Sox cap. 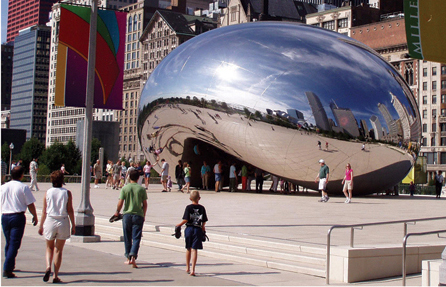 Cloud Gate (left), near the north end of Millennium Park. This shiny, silver bean mirrors the city at the entrance to Millennium Park, its surface capturing an ever-changing picture of the skyscape and its people. Artist Anish Kapoor used liquid mercury as a design inspiration and stainless steel as his material, creating a work that glistens and feigns movement. Walk under the sculpture’s 12-foot (3 1/2-meter) arch, look for seams (amazingly, you won’t find any) and consider your own reflection. As with funhouse reflections, perspectives morph and bend, depending upon your angle. Watching the faces change is interesting enough, but every few minutes water spews from a pair of puckered lips on screen, much to the delight of sun-scorched visitors. Kids position themselves to get squirted, which is exactly what Spanish artist Jaume Plensa envisioned.

Bronze Cow, aka Hanig Cow, 78 E. Washington St. Herd of cows? Of course you have, and none was more remarkable than the invasion of nearly 320 in Chicago in 1999, the first Parade of Cows in the United States. A walking tour of the artwork was a hit with tourists, and the statues eventually were auctioned, raising money for nonprofit causes.

The eyes of this particular bovine, made of dulled bronze, contain reflections of Chicago’s Historic Water Tower and the Picasso sculpture in Daley Plaza. This lovely Bossy was a gift to Chicago from private donors, including the family of Peter Hanig, who was instrumental in first bringing the endearing Parade of Cows to Chicago. Themed public art projects have since been replicated throughout the nation. Redemption, perhaps, for all that trouble caused in 1871 by Mrs. O’Leary’s cow.

Flamingo, 50 W. Adams St. Call ’em like you see ’em. Anchoring the Federal Plaza is the 1973 work of Pennsylvania sculptor Alexander Calder, the first work commissioned under the Percent for Art program. Color?
What you say is orange or red is technically vermillion here. The 50-ton (45,000-kilo) abstract steel sculpture is named after a graceful bird, but it also resembles a nimble gymnast doing a back bend. It’s humbling enough to walk under; don’t even think of climbing it.

The Four Seasons (right), 10 South Dearborn St. Outside of Chase Tower, surrealist
Marc Chagall’s mosaic covering a 70-foot (21-meter) slab celebrates human life and spirit as they age. This contemplative piece, installed in 1974, contains thousands of chips and hundreds of colors that produce an odd and whimsical mesh of frolicking dancers, fish adrift and lilting musicians. Can't miss it.

Miro's Chicago, 69 West Washington St. This one is easy to miss, because Joan Miro’s multimedia work sits across the street from the more imposing Picasso in Daley Plaza. The Spanish artist’s playful statement about Chicago and feminism was erected in 1981. The 39-foot (12-meter) figure's sturdy lower torso curves out like a bell, and atop its head is a thick bronze fork, tines aiming skyward, symbolizing rays of light beaming from a star.

Agora, Michigan Ave. and Roosevelt Rd. People's moods darken at the south end of Grant Park while meandering around Agora's 106 headless cast-iron figures, each nine feet tall. This 2006 work by Polish artist Magdalena Abakanowicz ranks among the most emotional and controversial in Chicago. See if it hits a nerve: The eerie figures look alike from afar but details differ when up close.

See these and other public art spots on your own (visit Explore Chicago),
or take an art sightseeing excursion via bus and foot through Chicago
Neighborhood Tours.