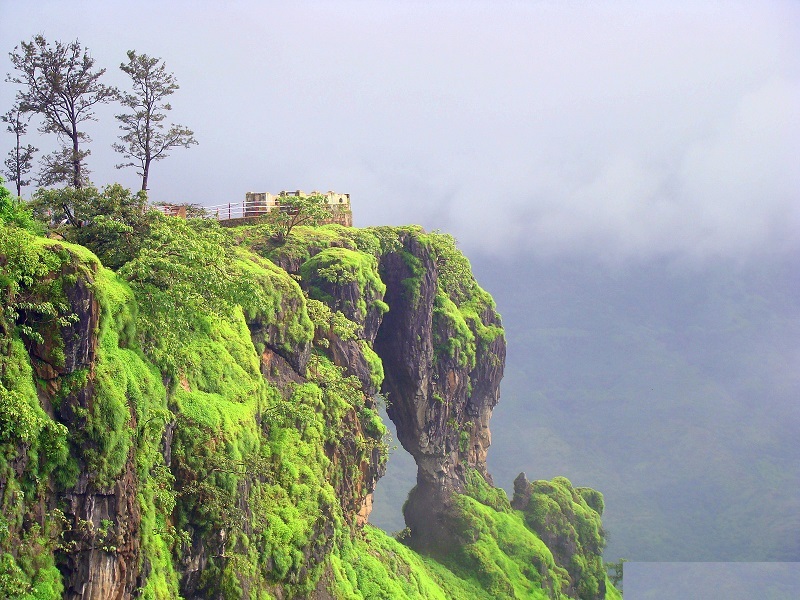 Mahabaleshwar is a charming hill station located in Satara district of Maharashtra. At an altitude of 1,353 metres in the Western Ghats range, Mahabaleshwar is known for its fascinating beauty, ancient temples, gorgeous waterfalls, misty hills, and valleys. This pristine hill station is the source of the Krishna River that flows across Maharashtra, Karnataka and Andhra Pradesh. Mahabaleshwar is one of the top monsoon destinations in India and also one of the best weekend gateways from Mumbai and Pune. There are several viewpoints that are strategically located to capture the panoramic views. Arthur’s Seat, Wilson Point, Kate’s Point & Elephant head Point, Connaught Peak and Bombay Point are popular viewpoints. Typically, 2 days is required to explore best Mahabaleshwar Packages. Mahabaleshwar is the source of the Krishna River. Mahabaleshwar attracts hordes of tourists for its lovely views, beautiful landscapes and pleasant temperatures.

Also known as Kate's Point, Elephant's Head is one of the most popular vantage points in Mahabaleshwar, taking that name after Kate, daughter of Sir John Malcom, founder of Mahabaleshwar during the British Raj. The other name is due to overhanging cliffs of this point are similar to the head of an elephant and its trunk. This vantage point is the extreme end of the mountain range and lies beyond the Lodwick Point. At a height of 1290 m, the viewpoint offers an amazing view of the Dhom Dam and the surrounding valley.

An ancient temple situated in the Old Mahabaleshwar, it's dedicated to Lord Shiva and is one of the Mahabaleshwar's most popular draws. Built in South Indian Hemadant style, it's enclosed by a five-foot wall and divided into two areas, the sanctum sanctorum and the central hall. The main sanctum has Shiva linga made of black stone, which is 500 years old swayambhu lingam. This self-originated lingam is in the shape of Rudraksha and is called Mahalingam. It is considered to be superior to the twelve Jyothir Lingams. The trishul of Lord Shiva along with his Damru, Rudraksha and one bed has been preserved in this temple and these are around 300 years old.

Popularly called "Queen of the Points," Arthur Seat Point is the most popular viewpoint in Mahabaleshwar and among the top places to experience Mahabaleshwar Tourism. Named after Arthur Mallet, the first man to build a house at this point. Situated at an altitude of 1340 m, Arthur's Seat is surrounded by the deep Savitri gorge on one side and a lush green plateau on the other side. This is the only point that clearly shows the geological contrast between the Konkan and the Deccan territories. Arthur's Seat is famous for floating of light objects; the gravitational force of the earth at this point is minimal and lighter objects thrown into the valley are said to "fly up" due to this reverse force. Arthur's Seat is the largest of the three parts of the Arthur's Seat Volcano site of special scientific interest which is designated to protect its important geology grassland habitats and uncommon plant and animal species.

Also known as Pratapgarh, this huge hill fort is located in the Satara district of Maharashtra. At an altitude of 1080 m, Maratha king Shivaji Maharaj had constructed the fort in 16th century to defend the banks of Nira River, Koyna River and Par pass. Pratapgarh Fort is among the best forts in Maharashtra and among the top places to visit in mahabaleshwar and one of the best historical forts near Pune. Pratapgad consists of two parts. The upper fort houses several buildings, including a Mahadev Temple and the lower fort houses Bhavani Temple on the eastern side. It is believed that Chatrapati Shivaji Maharaja was blessed with a shining sword at this temple.

An 1888 temple situated in Old Mahabaleshwar near Panch Ganga temple, this was built by a ruler of Ratnagiri on a hilltop overlooking the Krishna valley. The temple has a Shiva lingam and a statue of Lord Shiva. The temple is considered to be the source of the Krishna River,  Aasmall stream of water from a cow-face (gomukh) flowing into a water tank and further joining other water sources to form a full-fledged river. The temple is also known for its stone carvings and architecturally acclaimed ceiling. It also offers enchanting views of the Krishna valley and surrounding countryside.